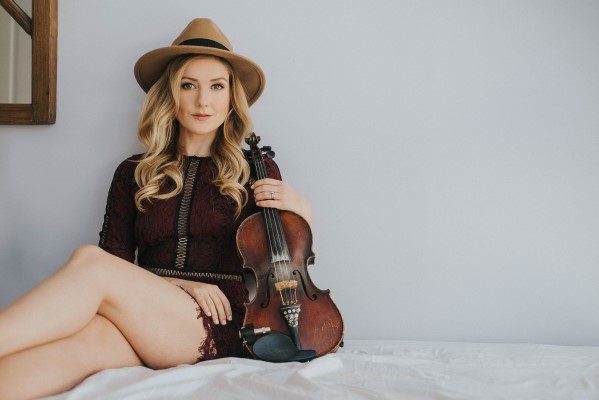 Canadian theatre fans will likely recognize Alicia Toner‘s soaring vocals on her debut album I Learned The Hard Way, but this is her opportunity to enthrall that fan base in a different way while introducing herself to a new set of music lovers altogether. Having spent over a decade gracing theatrical stages across the country (not to mention honing her violin skills with the New Brunswick Youth Orchestra even earlier in life),  Alicia Toner is ready to play the role of a lifetime: herself. Be sure to check out her brand new video for “I Learned The Hard Way” below.

From the very first note of your debut album, your tone and musicality is so incredibly crisp & smooth all at once. Do you credit your time spent in musical theatre in helping you take on your own songs?

Absolutely. I’ve been fortunate enough to work with some very incredible story tellers over the years and have been inspired by many to tell my own stories.

Was there a specific moment in your theatrical career where you knew it was time to add “songwriter” and “recording artist” to your resume?

It’s always something I’ve wanted to do, long before I was interested in Music Theatre. It just happened to be a perfect storm of meeting the right people at the right time in my life when I was ready to make that shift. I was doing a show in Toronto with Canadian fiddler/step dancer Stephanie Cadman(Belle Starr) and she introduced me to Stuart Cameron who ended up producing the album along with Peter Fusco.

The opening track of the album, “Waves”, was inspired by time spent listening to the waves crashing in & out at your husband’s family cottage. Besides in nature, where do you find yourself inspired to write?

Honestly, I often like to hole up in my bedroom and make myself write. Even if I don’t like what I’m writing, sometimes it will inspire something I do.

You cover John Prine’s “Angel From Montgomery” (made most famous by Bonnie Raitt in 1974) and do so beautifully. Are there any other classics you’ve always loved and would want to cover in the future?

The short answer is yes, there are hundreds of classics I’d love to cover. They are classics for a reason. I don’t think I could pull one or two out of the many like I did with Angel From Montgomery. It’s been a favourite of mine for years and one that didn’t even necessarily fit with the rest of the songs on the album. I just knew I wanted to record my own version of it.

On “Let You Go”, your East Coast roots shine all the way through from the fiddles to the drum beats and your vocal stylings. Were there any particular East Coast musicians that inspired you growing up and into music overall?

I loved Natalie McMaster growing up. I wanted to be just like her. I also had a lot of family influence when it came to music. My grandmother is a beautiful singer/guitar player as is my uncle. ‘My cousin is also a very accomplished blues musician. I learned to love music first through them. When it comes to East Coast inspiration, I am floored by a number of artists who are making their mark lately. I grew up in New Brunswick and now live on Prince Edward Island and those two provinces alone having artists like Matt Andersen, Meaghan Blanchard, The East Pointers, Paper Lions and so many more is enough to inspire any East Coaster.

The entire album has such a wild combination of genres from country to pop, rock to roots. Did this occur naturally in the writing process or was it a goal to keep listeners on their toes?

I would have to say a lot of that credit goes to the magic that is Stuart Cameron and Peter Fusco. They really crafted this album in a way that doesn’t put it in one category and it’s one of the things I love the most about it.

Since you have the vocal ability to tackle such a wide range of genres and sounds, who are your top three artists of any genre that you would love to collaborate with?

This is the hardest question anyone ever asks me. I don’t know how to pick three but I’ll give it a shot. I would say today my answer would be 1. Bonnie Raitt 2. The Milk Carton Kids and 3. Matt Andersen as he’s wildly talented and from my home province. There are, however, so many more than three.

The album definitely covers all stages of a relationship: the crush, romance, heartbreak and everything in between. What are your personal ways of coping with a break-up?

For me, the most important thing to take away from a parting of hearts is what you learned from that person. The end of a relationship, no matter what form it was in, is not a failure. My way of “coping” is focusing on all the positive aspects. What I learned about myself and what I learned about life.