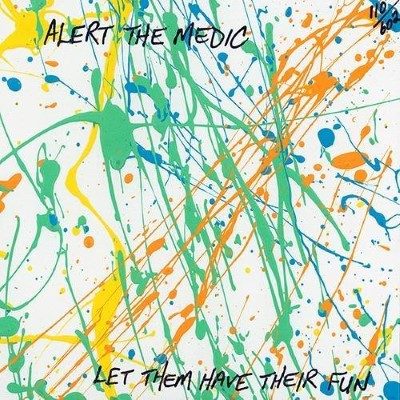 Four men, one band.  Professionals by day, kick ass rock stars by night.  They do not follow any mould and they don’t need to.  The skill, swagger, rock star attitude and just plain raw natural talent of Ryan, Matt, Troy, and Dale make one hell of a good time musically in Let Them Have Their Fun.  The following review is going to be an unbiased detail of fangirl gush as I explain just how amazing this album and band is.

Sigh.  I love Alert The Medic.  Yup, I said it.  Not because they are an East Coast band, but because they put out SOLID albums.  Every time an album comes out, I squeal with excitement and joy because I KNOW that I am going to have months of endless joy driving in my car with the tunes blasted high. Let Them Have Their Fun is no different.

Kicking the album off with “What are the Odds?” The rock and roll is definitely not stagnant.  Full of horns, guitars, and killer drum line, the album does not stop until “NorCal”, which ends the album nicely in a quieter, relaxed mood.

The pinnacle of the album has to be “Corporate Kid”.  The hard rocking first single off of the release has been in rotation across the country in anticipation of the CD.  Its quick climb up the charts should indicate just how amazing this song (and album) is!

Alert The Medic has found their groove and found their sound.  Expect nothing but better and better as more and more albums are released.

September 22, 2017, at the Seahorse Tavern, Alert The Medic will be having their CD release party.  All those that can make it to Halifax, NS to attend really should!  This is going to be a night where the people fall through the floor of the Marquee because the band tore the roof off the venue below!