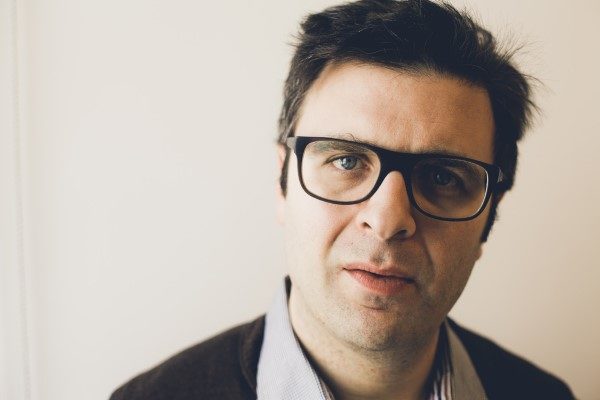 We recently had a chat with Brampton, ON’s own Friendly Rich. He has been around for quite some time and even composed the background music for 3 seasons of MTV’s The Tom Green Show. Now, he has released a new video in collaboration with Everything Is Terrible for, “The Melon Sun” which you can see below. Also, take a few moments to read what he had to say in our newest segment of Five Questions With!

Hello, kids, my name is Friendly Rich, I’m a composer from Brampton, Ontario.  I have been addicted to music for over twenty years, with The Great Blue Heron, my 11th studio recording about to be released next week.  Started making recordings in the late nineties in my parents’ basement, to battle the boredom of the suburbs.  I was inspired by the Italian philosopher, from the 1600’s C. Smalloochi, who said: “one can either produce or become produce”.  I love aging alongside this beautiful canvas of music, and the second family it brings.

I grab tunes at the urinal, melodies walking the street, in the pool, or sometimes somebody will tell me about Donkey Day in Guelph, and the damned thing nearly writes itself!  The first single The Melon Sun was one of the fastest I’ve ever written, inspired by a high profile Canadian divorce…the line you don’t fuck with the curly fry empire popped into my head and fermented quickly into this musical idea.  I tend to attract weirdos, like if I’m at a stag party, the most broken man in a hundred will find me, and tell me his darkest secret.  Don’t know why, I just tease it out of people, without effort.  I’m not seeking the weird, it just seems to fall into my innocent lap.

Very stoked to play a bunch of dates in Ontario and Quebec this fall (check my website friendlyrich.com for details), and then planning a return to Europe in support of Great Blue Heron in 2018.

Celebrating the uncomfortable, looking to connect with the audience, and present the best version of my music that I can.  I take the live performance seriously, and try my best to be like my heroes, RUSH 🙂
This touring band is a four piece, featuring looped trombones (Steve Ward), electric guitar (Phil Miles), drums (Joe Sorbara), and me!  I’m excited that Kevin Breit and Hawksley Workman will join the Lollipop People and I for a special night in Toronto, at Heliconian Club on October 13th, as it will be nice to reconnect with those guys, who are featured prominently on The Great Blue Heron.

I dig the title track The Great Blue Heron, from my new recording.  The mention of Jim Henson in the lyrics evokes a fun image in my head, every time I sing it.  The minute I wrote that one, it immediately felt like it had legs, and they were dangling!

Canadian Beats is all about Canadian music, so who are your current favorite Canadian bands/ arists?

I honour Dave Clark (Rheostatics, Woodshed Orchestra) on the new recording with my song, Clarky the Wizard and really celebrate him as a prolific artist, loving human, and solid mentor.  Dave’s always built me up, recently even asked me to open for the Rheostatics at the Horseshoe.  Reminds me of that really great teacher from high school, who believed in you, saw the special in what you did.  Dave does just that, and he’s a fearless musician on stage, who’s written a book of over 225 important songs (and counting!), a great part of our growing Canadian songbook.  I feel very fortunate to know so many musicians like Dave, who make me feel like I’m on a team of oddball superheroes.