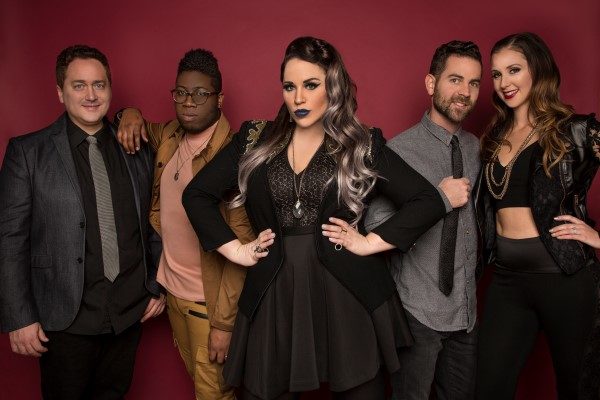 On September 23, the Canadian Songwriters Hall of Fame Induction Ceremony will take place at Massey Hall in Toronto. We are working along with them to present you with a series of interviews with some of the incredible Canadian talents that will be present at the ceremony. First up, we chatted with singer/songwriter, performer, producer, poet, and playwright, Hawksley Workman. Next, we chatted with Toronto’s own Eh400. Let’s find out a bit about what being a part of this event means to them.

We are Eh440 (pronounced ‘A’ like the letter, then “four”, then “forty”).  We’re a new-style Acappella group from Toronto.  Our line-up consists of a beatboxer (Luke Stapleton), bass vocalist (Joe Oliva), and three very different lead/backup singers: Tafari Anthony (soul, R&B), Stacey Kay (rap, pop), Janet Turner (country, pop).  We did this on purpose.  A lot of Acappella groups are born from a school or church choir or under the direction of one person and so their lead singers sound similar to each other.  We wanted to go against the grain and put five people in a vocal group who have no earthly business making music together.  The result has been a unique sound with many facets to it, and a lot of fun!

The Canadian Songwriters Hall of Fame Induction Ceremony is a huge event, what was your first reaction when you found out you would be performing?

We didn’t get too excited about this at first because we thought that there was a chance that it would fall through like so many opportunities do in the music industry.  Then we had a meeting with the show producers and thought “wow, this might actually happen” but we still feel like there is a slight chance it won’t.  Until we’re on the stage at Massey Hall we think that there is a chance that we’re going to get a call from our manager saying that someone was just pulling a really sick prank on us!

If someone has yet to see you perform live, can you tell us what to expect from your live show?

Since our inception 5 years ago, we’ve had fun at every single show, each one is high-energy, and we love putting our twist on each song we perform

The event will be live-streamed at CBCMusic.ca and on CBC Music’s Facebook and YouTube so it will be viewable to many, how does a performance of this magnitude differ for you from a regular show or festival?

We have had so many fans ask us to livestream one of our shows.  We were in Slovenia a while ago and they had the technology in place to livestream our show, so we decided to do it.  Sure enough, the technology failed and then we had to apologize to everyone who was waiting online.  So, we are happy to be doing a “do over” with totally profesh video/audio engineers from one of the most historic venues in the country.  It will be great to be able to open this show up to the world!

You are performing alongside some incredible Canadian talent, is there anyone involved that you hope to get the chance to chat with?

We will chat with them all!  k.d. Lang, Randy Bachman, The Arkells, Buffy Sainte-Marie and the list goes on!

Which of the 2017 inductees (Bruce Cockburn, Neil Young, Beau Dommage or Stéphane Venne) would you choose to share the stage with to perform?

Wow, this is like picking a favourite child!  We’re going to have to with Neilbeau Venneburn.  Seriously though, what an amazing group of inductees and it is such an honour to be a part of their induction ceremony.

With all the talent that Canada has to offer, we’d love for you to tell us about one or two of your favourite Canadian bands/ artists. Who has caught your attention recently?

The last Canadian that got a good listen in our band van was Jordan Hart.  We played a festival gig with him about a year ago and he’s continued to grow.  He has a great voice and catchy tunes.  Check him out!

Last but not least, what’s up next for you?

This month we’re supposed to perform in South Korea which is amazing, but our families are worried about, you know, their wacky neighbor.  Assuming we survive that, in October we do a run of college shows in 6 different states in the USA.