Review – Lowest of the Low 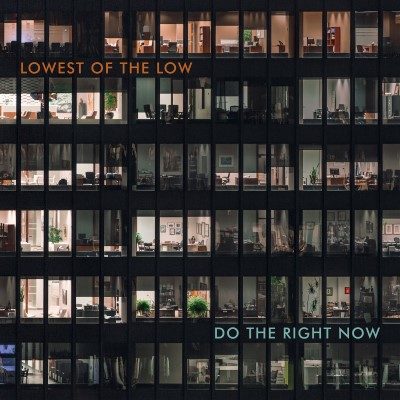 Thirteen years ago Mark Zuckerberg first launched Facebook from his Harvard Dorm, Kanye West would make his recorded debut with The College Dropout, Shrek 2 would take the world by storm, and Mel Gibson was still very much in favour with the public.  Yes, 2004 was a very different time.  It was also the last time that Lowest Of The Low had released an album.  That is until now.  Their return started with a string of shows across Canada throughout the summer, culminating with a headlining spot at Toronto’s Danforth Music Hall paired with the release of their newest album, Do The Right Now, a record that is very much rooted in the indie and alternative rock of the early 2000’s but feels like a nostalgic breath of fresh air.

The album opens with “Powerlines”, a softer opening song with just enough crunch and energy.  Immediately, I can hear the major influence that indie pioneers of the likes of REM and Elvis Costello have had on the song writing style of Lowest Of The Low.  The album’s title track, “Do The Right Now”, kicks off with the crack of a snare from a very Bonham-esque fill that welcomes in a more upbeat take on a similar style from the opening number, only “Do The Right Now” features a series of melodic and fuzzy lead guitar lines, giving the song an added edge.  Similarly, “The Hard Way” resembles a 90’s hard rocker fueled by punk rock, chaos, and a political theme as the track samples news reels which discuss the controversy surrounding the Dakota Access Pipeline.  My favourite track, however, is “Minutemen”, a track that builds intensity over a melancholic and emotional feel, and features the album’s strongest guitar solo which only adds to the slow burning nature of the song.

Do The Right Now is a vast mix of tones and styles that venture from summer prairie cookouts on “Sister Jude”, pop rock on the closing “California GOthic”, REM inspired indie on “Gerona Train”, to outrageous rockers on “The Hard Way”.   The unifying theme of the album seems to be the band’s conscious choice to write original alternative rock that intentionally strays from that of today’s musical climate.  This makes the return of Lowest Of The Low far more exciting; it is clear that the band had a creative itch that they wanted to pursue rather than cater to the taste of the mainstream public.  The resulting scratch was a tasteful record that, like any good story, has a series of dips and peaks, creating a very dynamic collection of songs.

Lowest Of The Low have hit a high point with their returning record, Do The Right Now.  The album is nostalgic of a time when indie and alternative rock wasn’t driven by electronic textures and synths, or in the opposite direction- simply acoustic progressions, banjos, and stomp boxes.  Instead, Do The Right Now embraces a unique song writing voice and is presented through a tight band of musicians who rally behind an overarching message of justice and voicing the cries of those often over looked, especially the working class and North America’s Indigenous communities.  In the end, Do The Right Now may be one of the strongest alternative and indie records to come out this year and is more than worth checking out.