Review – Julie and The Wrong Guys 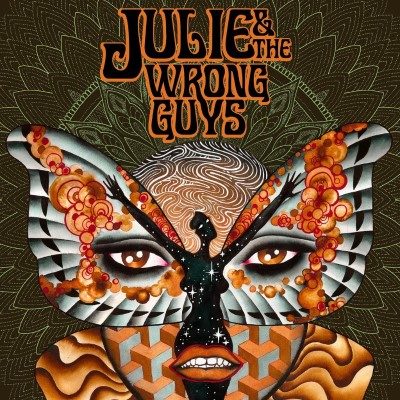 Julie & The Wrong Guys is a new project from Julie Doiron of Eric’s Trip, Eamon McGrath and members of Cancer Bats. Their eponymous new album will be out today (September 8th) via Dine Alone Records. Drawing inspiration from the 90s grunge and punk scene, this record is an absolute delight. It’s gritty guitar work, heavy drums and raw vocals bring back the underground world of garage rock and the days of earnest music.

“Love & Leaving” kicks open the album with loud, crunchy guitar shredding. The steady drums give it a grunge sound, whereas the vocals stray into a much chilled out summery vibe. This track definitely sounds like something that would be popular in a summer of the late 90s. The dirty guitar and drum sound work with the straight forward vocals to give you just a mere taste of what this album has in store for listeners. Being “technically” the first song written by the band, it’s an appropriate opener.

Originally from Julie’s 1997 solo album, Loneliest In The Morning, “Condescending You” is a heavy track with gritty guitars and raw vocals. It definitely reminds me of the type of songs Sonic Youth has put out in the past. In addition to this, the instrumental work on this track is just impeccable.

Stepping back a little from the previous songs is a track called “Tracing My Own Lines”. It’s much quieter and eerier than the earlier tracks. Steady, head-bopping drums open this track, playing in harmony to the creeping guitar. Doiron’s vocals on the track are honest and emotional. ‘I can kind of remember her’, she sings, slight irritation in her voice. Her vexation is evident in the lyric: ‘Where is the love we had before?’. The anger in this track is nearly palpable as the guitar roars and the drums break their steady pace, going off in little explosions.

“Farther From You” brings another flavour to the table. Crunchy guitars dominate the moody track, however, this one is rather interesting because it is a duet of sorts between Doiron and McGarth. The track boasts two types of raw vocals, each bringing its own distinct emotion and working together in perfect harmony. Not to mention the absolutely stunning layered vocals towards the end of the song.

“Hope Floats” closes off the album on a monumental note.  It’s a spacious track and starts off quiet. It should be noted that the production of this song is absolutely pristine, making the track a rather atmospheric one. According to the band “Hope Floats” was a very taxing song to record and took about “2 or 3 takes mostly because it was hard to get through. It’s a heavy, gut wrenching performance from everyone”. There’s no doubt about this. The hard work is evident in Doiron’s emotional vocals and the band’s masterful instrumental skills. In my opinion, this song is the band’s masterpiece. The heavy drums, persistent guitar and vocals awash with emotion keep one intrigued, wanting more.  I urge everyone to just go and listen to this track. Guaranteed your jaw will be on the floor, trust me on this.

Julie & The Wrong Guys is an amazing album. It has the power to play with one’s emotions, whether it is nostalgia, anger, exhaustion etc. This debut proves how much potential the band possesses and it would be a crime to not give them a chance. Prepare yourself to get lost in a world of angst, empowerment and the wail of a guitar.