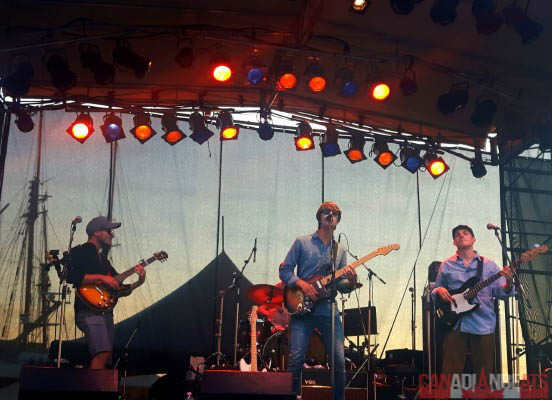 Have those end-of-summer-blues? Well, no one attending the 24th-annual Vancouver Island Blues Bash did: with three days of annual back-to-back afternoon and evening entertainment, island-favourite food trucks (including—but not limited to—Deadbeetz, Jackson’s Ice Cream, and Greek on the Street), an expansive beer garden, and a stage propped against the backdrop of the sea, who could have the energy to feel down?

Rolled out like a red carpet across Victoria’s scenic Inner Harbour, the Blues Bash is a notoriously entertaining time for both locals and tourists alike. Dedicated to lovers of blues and rock n’ roll, the three-day concert draws crowds rivalled only by Rifflandia festival’s main stage. With 600 packed in the beer garden, a throng of 100 in front of the stage, and roughly 800 lined up along the knoll and harbour wall to soak in the music without having to pay for a ticket, the Blues Bash is not only an unforgettable summer romp but an unfailingly popular one as well.

With entertainment differentiated between an afternoon and evening slot—live music playing from 11-4, then resuming with the headlining bands at 7—I was granted a pass to review the headlining slot of Saturday the 3rd, and the audience was buzzing even before the sun started to set.

A touring rock band from London, England, The Villanovas took the stage at 7:30 to a crowd that was already ecstatic to see them. Charismatic, hard-hitting, and a fan-favourite from their appearance at last year’s Blues Bash, it was a toss-up between what the audience enjoyed more—their music or their collective dry wit.

“How are you enjoying it up there [on the lawn]? You cheap bastards,” joked their lead singer, his guitar already splattered with blood from the strings having torn open a wound on his hand. And yet no one but those in the front row would know—all four were bouncing with energy and never missed a beat, their synergy undeniable. The ever-growing audience ate up their showmanship, from the drummer’s flair to the lead singer playing the guitar with his teeth.

“Who’s excited for Harpoonist and the Axe Murderer?” he asked, to which fans in the crowd responded, “We’re here for you!”

Harpoonist and the Axe Murderer

Sultry, original, irresistibly catchy.—All descriptors of Vancouver-based blues duo Harpoonist and the Axe Murderer. Currently a four-piece for their tour, the west coast outfit took the stage just as the sun was sinking behind the horizon. While The Villanovas brought the crashing, all-encompassing rock, Harpoonist and the Axe Murderer slowed it down for the evening, each of their tracks as sinfully compelling as the last.

With a good-natured stage presence, seamless interaction between the brand-new drummer and backup vocalist—only brought in as recently as their last four shows—, and vocals that left the volunteers sweeping jaws off the floor, Harpoonist and the Axe Murderer were as fun as they were stunningly talented—and the audience couldn’t get enough of it. “That’s got to be one of the best voices I’ve heard in my entire life,” muttered a nearby concert-goer after the backup vocalist’s late-concert solo, and there were hushed whispers of agreement. Cries for an encore rang out long past the foursome had exited the stage, and on my way out I noticed that people had gone so far as to rent out paddle boats and kayaks and sit out on the water just to hear a glimpse of them.

The Vancouver Island Blues Bash is always an uproariously good time, and this summer’s edition was no exception: with good views, good food, good weather, and amazing music, you may as well start thinking of buying your tickets for next summer’s 25th anniversary.