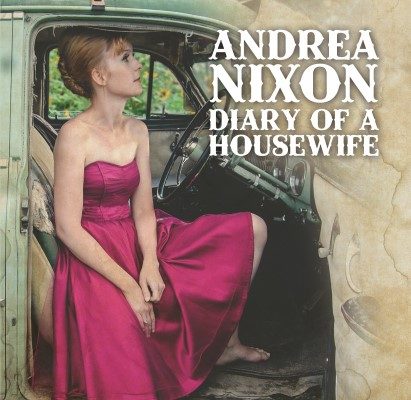 Andrea Nixon, an indie country music singer-songwriter, hails from Edmonton, Alberta and in 2017 was a nominee for the Edmonton Music Awards Artist to Watch. She is also a 2017 finalist in the Project Wild Artist Development Program, a partnership between Alberta Music and Calgary’s Peak 95.3 aimed at launching the careers of Alberta’s next generation of country stars. Nixon’s a strong believer that her life and her music are inseparable so it’s no surprise that her debut album, Diary of a Housewife has proven her commitment to her craft and to help make a positive change in this world, along with being a wife and a mom.

This 11-track album is filled with all that makes country music, well, country music – relatable stories, stories from the heart about real life, with a little bit of pop and rock added in. Diary of a Housewife has songs full of heartache, joy, lov, and angst. If you’re feeling the need for some old-school country, a sound like Dolly Parton or Linda Ronstadt; or for 1980s rock, similar to Pat Benatar; or, you want to hear some modern day country that has that Miranda Lambert sass; or you’re in the mood some sad or even killer ballads, this album has all of that. It’s a relevant compilation for today’s country music listener.

There are three tunes in this collection that you may have already heard. Nixon’s first single, “You Didn’t Make Me” was released in February 2015. This one has sass. It shows courage. The ex-lover no longer has control over this woman. You can actually picture Miranda Lambert singing this. “You Didn’t Make Me” is my favourite. “Innerglow” was released in September 2016. It’s another that showcases the strength that Nixon has. There is a lot of grit behind this one and it reminds me of an ’80s rock love song, a little Pat Benatar perhaps. The third previously released single is “Song Without a Name.” It was just released in July 2017 and is a very upbeat and fun tune.

There are some of the ballads on this album that include “Stronger Than a Storm,” Breaking Through (Madonna’s Song),” “Nothing Lies” and “Waiting for Sirens.” These ones show the grace and beauty coming from Nixon as she powers through them with her sweet sounding voice.

“Waiting for Sirens” is a very sad ballad about a story that is all too real in today’s world. It tells the story of the side of life no one wants to live and it affects a great sorrow within. Nixon has launched an awareness campaign in Alberta on behalf of families affected by violence. She is visiting and performing in shelters around the province and is gathering stories from many survivors as well as the frontline as part of a video series aimed at raising funds to buy gifts for families living in shelters.

Diary of a Housewife provides a very enjoyable experience for those who choose to listen to it. It is a MUST download.