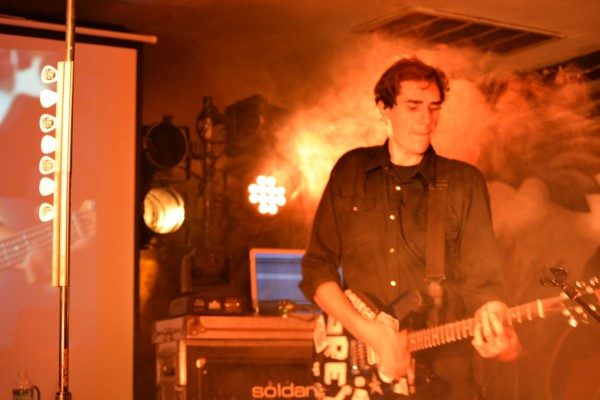 Toronto based one-man alternative rock band, Rosedale is about to embark on some tour dates, and we were happy to speak with Mike Liorti for this segment of Five Questions With. Enjoy!

My name is Mike Liorti and I’m the singer, songwriter, producer, multi-instrumentalist, and only member of the progressive power-pop act Rosedale.

My music is pretty high energy, full of pop hooks and hard hitting drums. I like to layer a lot of the melodies and beats with multiple instruments to make a thick wall of sound. And I tend to write about nostalgic memories of growing up and never giving up.

I have a bunch of tour dates coming up with my EP release next week. Three Canadian dates in Toronto September 6th at The Horseshoe Tavern, Ottawa on the 7th at House of TARG, and Montreal on the 8th at La Vitrola. Then I’m down in the states until next year for the rest of the tour. I’ve created a one-man show that has been developing for the last couple years and it is quite the production. I basically incorporate video footage of me recording all the backing tracks/re-amp tracks, my story of how and why I do what I do, a fully programmed LED light show that I put up every night, and I run around playing live keys, guitars, and sing. It sounds crazy on paper and it’s an insane amount of work/preparation for one person but it’s been going over really well.

It depends on the person. If you’re in a band or even an aspiring artist of any kind I always suggest the song “Sustain”. But if you’re looking for a radio jam to have stuck in your head and dance to, the first track on the new EP “What We Started” is a good one. If you’re a parent I’d suggest “To My Father”…It’s always interesting to see people get attached to certain Rosedale songs.

Definitely Gob out of BC. I saw them at Playdium in Mississauga in the eighth grade and they were my heroes. I had to control my inner fanboy when I’d see Tom with Sum41 out on Warped 2012. I used to listen to The World According to Gob front to back at least once a week. Still one of my favourite listens. Not a single thing I’d change on that record.