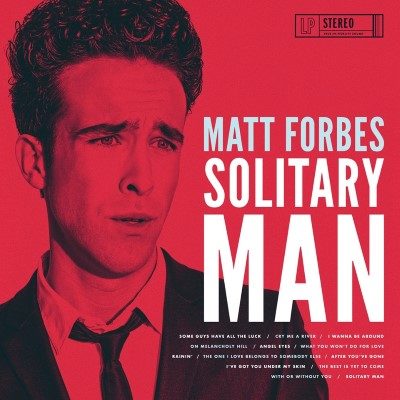 Matt Forbes has announced the release of his upcoming album Solitary Man. Set to hit major music retailers on October 20th, 2017 the album is full of Forbes’ own unique and captivating interpretations and arrangements on some pretty amazing and well-known hits. Forbes teamed up with Grammy award-winning producer Nicholai Baxter (La La Land Original Soundtrack and Lady Gaga A Star Is Born) to co-produce Solitary Man.

Forbes, a native of Halifax, Nova Scotia released his debut full-length album in October 2015, Coulda Woulda Shoulda. Since his debut release, Forbes has been touring and forecasting his future projects including his newest release, Solitary Man. With his youthful approach to iconic pop standards and giving songs their own new jazzy twist, Forbes has been making a name for himself one performance at a time.

Forbes has been sharing his music on YouTube with a growing fan base. With everything from Rod Stewart’s “Some Guys Have All the Luck,” to the Gorillaz “On Melancholy Hill” there is no tune that Forbes is afraid to tackle and make his own. Mixing in the best of the Great American Songbook and some of his favorite songs in music, Solitary Man has a little jazzy something for everyone.

Forbes mentions how excited he has been while working on the new album; “We’ve been very busy the past eight months pushing this music to the next level and I can’t wait to finally share it with you. The first single drops in two weeks so stay tuned…!”

While patiently waiting for the new single, and the release of Solitary Man you can still check out all of Forbes current releases on iTunes, Spotify, and YouTube now.

Solitary Man Track List:
Cry Me a River
What You Won’t Do For Love
I Wanna Be Around
Solitary Man
The One I Love Belongs To Somebody Else
With Or Without You
I’ve Got You Under My Skin
Rainin’
The Best Is Yet To Come
Angel Eyes
After You’ve Gone
Some Guys Have All the Luck
On Melancholy Hill