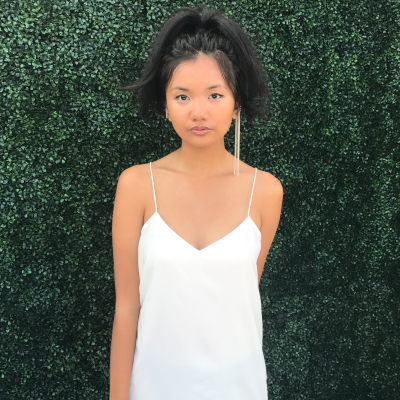 We had a chance to chat with the up-and-coming singer, songwriter, and producer CHARSOLI via this segment of Five Questions With. CHARSOLI has just released her debut EP, To Fruition on August 18, which you can check out below via Apple Music. Now’s your chance to find out more about this Toronto based artist. Enjoy!

Hey, I’m CHARSOLI and I’m a producer, singer-songwriter born and raised in Toronto. Being brought up in a musical household, the variety of sounds that have been introduced to me throughout the years have gradually inspired me to create music of exploration but still leaves room for connection. As a female of Asian descent entering an industry where Asian female producers and singer-songwriters are scarce, it’s important to me to push through these boundaries with my musical identity in order to express a perspective that’s typically not heard.

I just released my debut EP To Fruition. You can listen to it on all music outlets including iTunes/Apple Music, Spotify, and Google Play.

I’d like to say my sound has influences of R&B and soul thanks to the likes of D’Angelo, Lauryn Hill, and Alicia Keys. However I wouldn’t categorize my music within those genres. My eclectic background in music has allowed me to incorporate a combination of melodic lines drawn from my classical training in piano with my constant exposure to older pop melodies. Chopin was a big influencer for me growing up as a classical pianist. I would get so caught up in how beautiful his melodies were that my piano teachers would constantly tell me that I wasn’t paying attention to the technicalities of the piece. Contrast classical Romanticism to the type of music my parents would play around the house. One day it would be Barry White. The next it would be Barbra Streisand. From Bryan Adams to Earth, Wind & Fire, my ears were exposed to a hodgepodge of music. But the one thing in common that these artists have is the ability to create a long-lasting, captivating melody. Through my own melodies, I’m always looking to attach words with personal meaning in order to convey something deeper to the listener, hoping they’ll be able to feel what I feel.

I’m a big proponent of exploring unconventional sounds, and this is heavily influenced by my relationship with electronic music. Up until recently I have started studying the evolution of electronic music, looking at pioneers like Kraftwerk and Giorgio Moroder, to more modern day producers like Daft Punk, James Blake, and even Kanye West. The way these artists were able to grow out of sounds that are so out of the box and into something that is innovative, is very inspiring. So when I produce a beat, I always have that in mind. There is no limit to the sounds you put together and how you put them together. There’s always room for growth.

I also enjoy experimenting with song structure. I thank The Beatles for this because their body of work is so large and Lennon and McCartney were not afraid to play around with different forms. They’d have one song with no choruses, and another song with a by-the-book pop song formula. They weren’t afraid to be different. On the To Fruition EP, you’ll find a number of songs that don’t follow the usual verse-chorus-verse-chorus-bridge form. But no matter how a song is structured, if it conveys that message and that emotion to the listener and they’re willing to connect to it, I’ve done my job.

I like to keep my live performances minimalistic. No theatrics and no crazy eye-catching effects. Just myself, the audience, and the music. I think that keeps things more intimate and is less distracting. It’s important for me to emotionally connect with the audience, otherwise, I feel like I fail to communicate the essence of my music. I am scheduling a few upcoming shows within the next couple of months. In the meantime, stay tuned and connect with me for updates. Socials linked at the end of the interview!

If I were to choose a song that embodies myself and what I stand for as an artist, I would recommend “As You Cry” from the To Fruition EP. This is a song that I am extremely proud of as a whole – the production, the songwriting, and the meaning behind it. I produced the whole beat on Garageband back when I was afraid to make the jump to Logic and had a limited number of software instruments. This was the first time I realized I was capable of putting together unfamiliar sounds. I thought of it as an odd beat, yet something that was emotionally pulling. The song doesn’t follow a conventional song structure either. I felt that the message of the song was spiritually important so I wanted to keep the lyrics short, sweet, and to the point. “As You Cry” is self-reflective, a song about self-compassion through the hardships – something that I still continue to struggle with and I know other people in my life do as well. Life is filled with difficulties and at the end of the day, we’re all human. It’s okay to feel the way you feel. It’s okay to cry.

One of my favourite Canadian artists is Montreal producer Kaytranada. I’ve been following Kaytranada since his Soundcloud days and what drew me in was his distinct production. Whenever you heard a song with a particular kick drum or synth, you knew it was him. I love how he started off remixing popular R&B and hip-hop tracks, adding his signature sounds, and then slowly transitioned into creating his own music. Kaytranada is an influencer with a whole catalogue to show for it. I have to say Daniel Caesar is also killing it right now. He’s bringing back a neo-soul vibe that isn’t so prominent and I think that’s what the music world needs. It’s refreshing.

Share this:
Related ItemsCharsoliInterviewontarioOntario MusicTo FruitionToronto ON
← Previous Story Catching up with Steven Page
Next Story → Countdown to The Canadian Songwriters Hall of Fame Induction Ceremony – Interview with Hawksley Workman