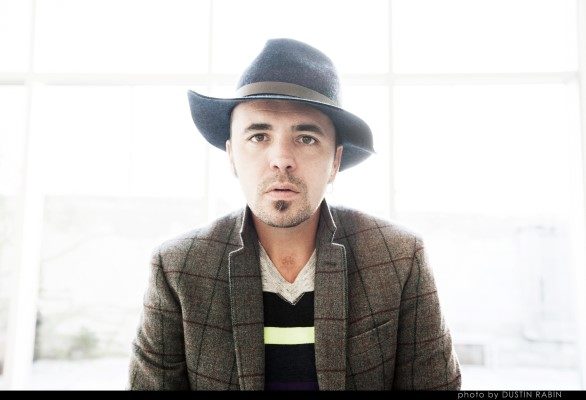 On September 23, the Canadian Songwriters Hall of Fame Induction Ceremony will take place at Massey Hall in Toronto. We are working along with them to present you with a series of interviews with some of the incredible Canadian talents that will be present at the ceremony. First up, we have singer/songwriter, performer, producer, poet, and playwright, Hawksley Workman. Hawksley has been a staple of the Canadian music scene for over 17 years and possesses a catalogue of 16 solo releases. Let’s find out a bit about what being a part of this event means to him.

The Canadian Songwriters Hall of Fame Induction Ceremony is a huge event, what was your first reaction when you found out you would be performing?

I was delighted to be asked. Especially to honour one of my biggest heroes and influences, Bruce Cockburn.

If someone has yet to see you perform live, can you tell us what to expect from your live show?

I like to try and chase and conjure. I defer to the physical and guttural parts of the performance.

The event will be live streamed at CBCMusic.ca and on CBC Music’s Facebook and YouTube so it will be viewable to many, how does a performance of this magnitude differ for you from a regular show or festival?

Oh, I think it’s pretty much the same for me as far as audience view-ability. Except, in this case, I’m honouring Bruce, and it’s about him… so being consciously reverent will be the focus.

You are performing alongside some incredible Canadian talent, is there anyone involved that you hope to get the chance to chat with?

It’s always nice seeing Bruce.  I really like hanging with the fellows in Blackie and the Rodeo Kings too.  I’d like to meet Don Ross as well.

Which of the 2017 inductees (Bruce Cockburn, Neil Young, Beau Dommage or Stéphane Venne) would you choose to share the stage with to perform?

It’s been a lifelong dream of mine to be Bruce Cockburn’s touring drummer.

With all the talent that Canada has to offer, we’d love for you to tell us about one or two of your favourite Canadian bands/ artists. Who has caught your attention recently?

Last but not least, what’s up next for you?

I’m currently composing songs and music for a new theatre production at The Citadel Theatre in Edmonton called The Silver Arrow, a Robin Hood adaptation. There is a new Mounties record. I’ve been doing a lot of co-writing these days.  Always getting a plane to go somewhere…