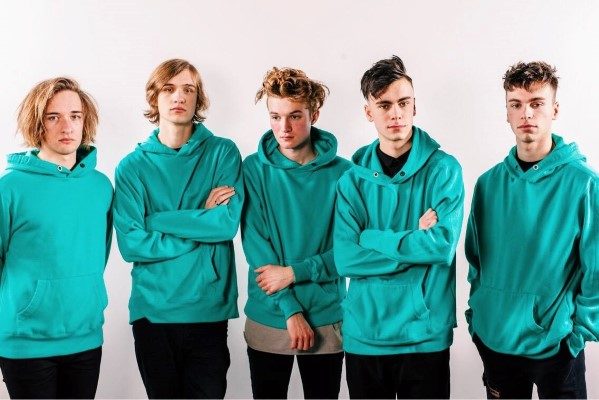 BreakOut West 2017 takes place in Edmonton, AB between September 13 – 17. The event encompasses the Western Canadian Music Awards, Industry Awards, Hall of Fame Induction, Industry Conference, Kick-off Concert and a city-wide Music Festival. It’s the place to be if you’re able! The Festival itself features over 60 of the best in Western Canadian bands and artists, and we are happy to chat with a few of them leading up to the event! For our first interview, we spoke with Manitoba based Kayla Luky, Vancouver’s The Matinée, and then Saskatchewan’s The Wolfe. Today, it’s all about Vernon, BC based band, //AMISTAD//.

We’re called //AMISTAD//, we’re five best friends from a small(ish) town in the Okanagan called Vernon, BC. We’ve been playing music together for almost seven years now, focusing mainly on the live show and strong visuals to push our songs to the world.

You are taking part in this year’s BreakOut West, what does it feel like to be a part of this event?

It’s a very cool feeling to be able to finally be a part of it! Recently we’ve been able to get into shows and festivals that we used to send our demos to when we were 12 years old making music in our basements, so it’s been a very humbling and exciting experience to have those opportunities finally become a reality.

What other bands/ artists are you looking forward to checking out at BreakOut West?

Sadly we’re not going to be able to stick around BreakOut West for long, but we’re stoked about The Wet Secrets, huge fans of the matching band outfits and the sweet hats.

Besides the performances, is there any other event that you’re looking forward to?

We’ve been invited to play at the WCMA Industry Brunch on Sept.16 before our show at the Needle Vinyl Tavern. We’ve never played at a brunch before so we’re pretty stoked, two of our favourite things together: music and breakfast food.

I hear there is a Closing BBQ on September 17, so of course, I have to ask, what’s your go to food to BBQ?

Barbecued pineapple is nuts. So good.

We also have a sweet restaurant in Vernon called Station BBQ that changed our lives one time, so props to them and their whole menu.

Do you have any other upcoming shows that you’d like to tell us about?

Right after BreakOut West, we are heading to LA for the first time to play a showcase at The Bardot as part of School Nights (Sept.18), then after that, we’re in Hamburg, Germany to help represent Canada at Reeperbahn Festival (Sept. 22)!

If someone has yet to see your perform live, how would you describe your live show?

Visceral, cerebral, and emotional. Everything that we put into the songs times one thousand, it’s the most important aspect of our band, and we strive to make others feel that every time we play.

Good question. Right now I think we’d say Radikal, it has a lot of the different elements we use in the rest of the EP, and to us, I think it serves as a good introduction to //AMISTAD//.

Here at Canadian Beats, we’re all about Canadian music, who are some of your favourite Canadian bands/ artists?

We’ve always looked up/loved bands like The Zolas, We Are The City, Said the Whale, Paperboy & the Messengers, Windmills, all amazing people.

After we head to LA and Europe, we’ll be continuing to work on the next album and continuing to push our current EP ‘TALK PEACE TO A WOLF’ to the rest of the world. Stay tuned for more content and more shows!