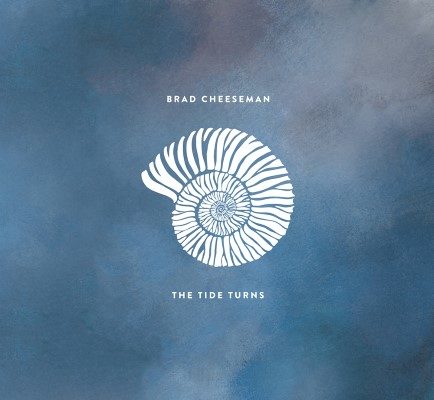 Based out of Hamilton, Ontario, jazz bassist Brad Cheeseman has returned with his second full-length record, The Tide Turns.  The album follows the release of his 2016 solo debut Figurants and sees a collaboration with some of Toronto’s top players, including Kelly Jefferson on sax, Marito Marques on drums, Robert Chapman on guitar and Sam Kogen on piano/keyboards.  The album is a beautiful collection of sophisticated and tasteful modern jazz written and performed by a group that are nothing short of masters at their crafts.

The album starts off with the self-reflective title track, a ballad of incredible simplicity with a layer of complex harmonies underneath.  On the surface, the song slowly drifts by in a lounge like setting, but upon closer listening to, like the rest of The Tide Turns, the opening track is brilliant.  Contrastingly, the following track, “All In”, is a bouncy modern take on jazz that sounds as if it could be an instrumental Stevie Wonder jam.

Whether it be the Latin and explosive flair of “29”, the push and pull rhythms of “Get That Fire”, or the indulgent and jazz fusion nature of “High Tide”, The Tide Turns is a brilliant record which is able to traverse much sonic space, making it an incredibly versatile record.  The ballads, such as the aforementioned opening track and the closing track, “Lonely Lonely” are performed with as much emotion as technical prowess where the lyrical saxophone of Jefferson is often given the spotlight as a leading and spectacular voice of the album.  The entire band stands out for their musicianship, taste, and improvisation as they each seamlessly flow through the excellently written songs from Cheeseman.  Perhaps what I enjoy most about The Tide Turns is how, like most classic jazz albums, it sounds as if it was recorded live off the floor with all five musicians breathing in the same atmosphere of pure creativity.  Not only am I applauding the band for their skill to perform so flawlessly in a way that still sounds uncut and unfiltered through modern technology, but I am praising Cheeseman for his ability to have written an album that has all that it needs to be considered a classic.

While the sentiment of rock being dead has been muttered under the breath of conservatives for generations, the question of if jazz is still, well – for lack of a better term-  jazz, is often questioned among listeners of the genre whenever change starts to enter the musical ether.  It happened with the emergence of bebop in the 1940’s, and it happened when Miles Davis first incorporated electric instruments in his recorded work on his 1969 release, In A Silent Way, and would occur once again the following year when he released his first foray into jazz fusion and the abstract on Bitches Brew.  While jazz has continued to change further since then, The Tide Turns stands as a record which perfectly captures the jazz of today, while still challenging the boundaries of the style.  There is very little that is traditional about this record, and yet, it seems very much influenced by the music of the past- from obvious jazz giants of the likes of Davis and Coltrane, to funk and Motown innovators of the likes of Wonder and Sly And The Family Stone- creating a record that does not play it safe.  The results are a jazz album that is exciting, unique, simple, and complex altogether.  Seeing as the record is on the heels of Cheeseman’s 2016 Montreal Jazz Festival’s Grand Prix de Jazz win, it is no surprise that from start to finish, The Tide Turns is a beautifully written record that by all standards is a timeless masterpiece.