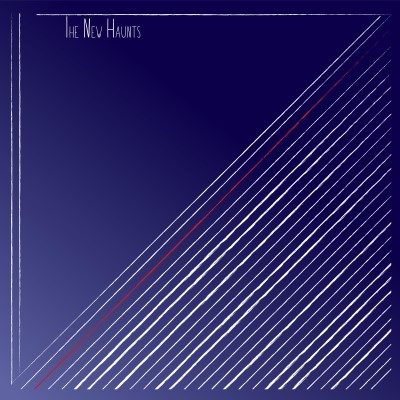 Hailing from Edmonton, AB are indie rockers, The New Haunts. Described as having “an unconventional mix of guitar riffs, ambient textures, catchy melodies, and detailed drumming” the band is a breath of fresh air with its rather interesting musical style. The band already has a nomination in the Artist to Watch category in the Edmonton Music Awards 2017 under their belt. In a month’s time, they will release their eponymous 8 track debut album and Canadian Beats were lucky enough to get a first listen.

The album opens up with a mellow and yet raw track called “Trigger”. The ambient guitars maintain an atmosphere of placidity throughout the song. This being said, a sort of underlying feeling of suspense is also present as a result of the marching drums – almost similar to work by Death Cab For Cutie. The moody, to-the-point vocals and layered harmonies make this track a rather haunting one.  “Trigger” is appropriately named because though it starts off calm, it continues to build up in its 4 minutes and 38-second duration. Storm-like and raw, it sets the stage for the rest of 7 whirlwinds that are to follow

Upon writing up this review, I tried to stay clear of the songs that the band had already shared on their website. However, “Writing On The Wall” is such a wonderful track, I couldn’t help myself from doing a write up on it! It sounds like a reminiscent of the ‘90s. It’s scratchy guitars and chilly backing vocals add elements of nostalgia and yet keep the track feeling fresh. It’s wonderful bassline pulses heavily through the song, adding character. The track manages to keep a steady pace throughout, however towards the end starts picking up a little, building up suspense but then fades out into static.

“Yes/No” explodes open with its gloomy jangling guitars. The song definitely has a touch of ‘00s influence. The drums and screaming guitars create a complimenting melody. The song tends to wax and wane between electrified and calm. The tension in this track is present and almost palpable.

“The River” is a track that is definitely funkier than the rest. It’s vocals, however, still remain steady and keep the mood of the album. It plays almost in the same vein as its predecessor with the ‘00s influence there and pockets of instrumental explosion.

The album closes off with “Shorthand”. The track’s bubbling bassline and fast drums establish a nice groove. This groove is complimented by the raspy vocals. It’s driving guitars end the album with a bang.

Atmospheric and teeming with rhythm, The New Haunt’s self-titled album is raw and real. Its production is clean cut and crisp and. The vocals are fresh and the instrumentals are sonic. It’s no mistake that the band was nominated for an award in the Artist to Watch category. Having given this album a listen, there is no doubt that the only direction for The New Haunts now is up. If a storm could be caught and produced into a musical record, this album would be it. The album starts off on a quieter note and continues to build up throughout – much like a hurricane itself. How to enjoy this album to the fullest? By driving down a vast space as the sound of the pelting rain mixes in and fades into the sound of the drums and gloomy guitars.