Home / Promos / CCMA has announced its songwriters for the In the Round: Crossing Borders presented by ole

CCMA has announced its songwriters for the In the Round: Crossing Borders presented by ole 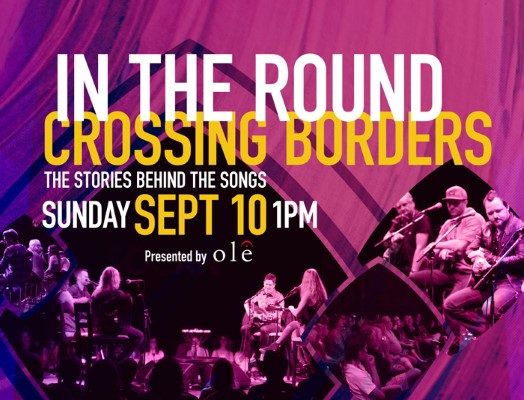 The Canadian Country Music Association® (CCMA®) announced that Alan Doyle, Eric Paslay, Liz Rose, Deric Ruttan and Gordie Sampson are the award-winning master class songwriters on stage, in an acoustic guitar setting, to share their stories behind a few of their biggest hits. This event takes place on Sunday, September 10, 2017, from 1 until 3 p.m. at TCU Place, 35 22 Street E in Saskatoon. This is a truly a unique experience for all those who attend.

Alan Doyle is best known as the lead singer from Canada’s East Coast band, Great Big Sea. They have had unbridled success for the last 20 years with their nine albums, double-disc hits retrospective and two DVD releases that have all been declared Gold or Platinum and have sold a combined 1.2 million copies in Canada. He has two solo albums out a third one coming soon, that he recorded with the legendary Bob Rock. Doyle’s album, So Let’s Go, is one that continues to solidify his reputation for being one of Canada’s most-loved performers and storytellers.

Eric Paslay is a renowned Platinum-selling hit songwriter, an outstanding performer and a breakout country music artist that now calls Nashville, Tennessee his home. He has five No. 1 hits under his belt, including “Even if it Breaks Your Heart” (Eli Young Band), “Barefoot Blue Jean Night” (Jake Owen), “Angel Eyes” (Love & Theft), “Rewind” (Rascal Flatts) and “Friday Night,” the killer single from his self-titled debut album. Between two GRAMMY nominations in 2013 and 2016, Paslay most recently garnered a 2016 ACM Song of the Year nomination for “She Don’t Love You.”

Liz Rose, originally from Texas, moved to Nashville at 37 years old to write songs. She has co-written 16 songs with Taylor Swift that include “Tim McGraw,” “Teardrops On My Guitar” and “You Belong With Me.” More recently, she co-wrote Little Big Town’s Double Platinum hit, “Girl Crush,” which earned the GRAMMY for Best Country Song in 2016 and the Country Music Association’s Award for Song Of The Year in 2015. Rose has also written songs for many other artists including Alison Krauss, Blake Shelton, Bonnie Raitt, Carrie Underwood, Chris Young, Gary Allan, LeeAnn Womack, Miranda Lambert ­and Tim McGraw.

Deric Ruttan, a native Canadian who resides in Nashville, Tennessee, besides being a phenomenal country music artist, an ASCAP, SOCAN, CCMA and CMAO (Country Music Association Of Ontario) Award winner, he is also a GRAMMY nominated songwriter. Ruttan has over 75 of his songs recorded by other country music superstars that include Blake Shelton, Jason Aldean, Eric Church, Tim McGraw and Dierks Bentley. “Mine Would Be You,” recorded by Blake Shelton, was a three-week No. 1 Billboard hit and was nominated for a GRAMMY Award for Best Country Song and an ACM Award for Song Of The Year. His fourth No. 1 country single was handed to him, this past April, when “Any Ol’ Barstool,” his song performed by Jason Aldean, soared to the top of both the Billboard and Mediabase country charts.

Gordie Sampson is GRAMMY award-winning songwriter. He hails from the East Coast of Canada but currently lives Nashville where he has written hit songs for artists like Carrie Underwood, Hunter Hayes, Florida Georgia Line and Little Big Town, to name just a few. Sampson returns home to Canada every summer where he is always welcomed back by his fans and supporters, year after year. Part of returning home is to celebrate his annual Gordie Sampson Songcamp, held in Ingonish, Cape Breton. This camp has been going strong for eight years.