Canadian Beats Passport – Green Day with Catfish and the Bottlemen

Green Day brought their Revolution Radio tour to a capacity crowd at Toronto’s Budweiser Stage on Friday night and what a show it was. The 26 song, 2 and a half hour long set included plenty of pyro, a t-shirt gun, water cannons, constant interaction with the audience from frontman Billie Joe Armstrong and 2 encores to end the night. From start to finish t was everything you could ever want in a rock show and more.

Getting things underway were Welsh rockers Catfish and the Bottlemen who played a depressingly short, but incredibly kickass 5 song set which hit all the fan favourites from the bands two albums. The foursome started out with the 2014 single ‘Cocoon”, and despite seemingly struggling with some on stage audio issues, quickly won the crowd over.  Having seen the band live 4 times in the past 2 years (full disclosure The Bottlemen are my favourite band and the whole reason I wanted to over this show) I was once again blown away by just how much better they get every time I see them. 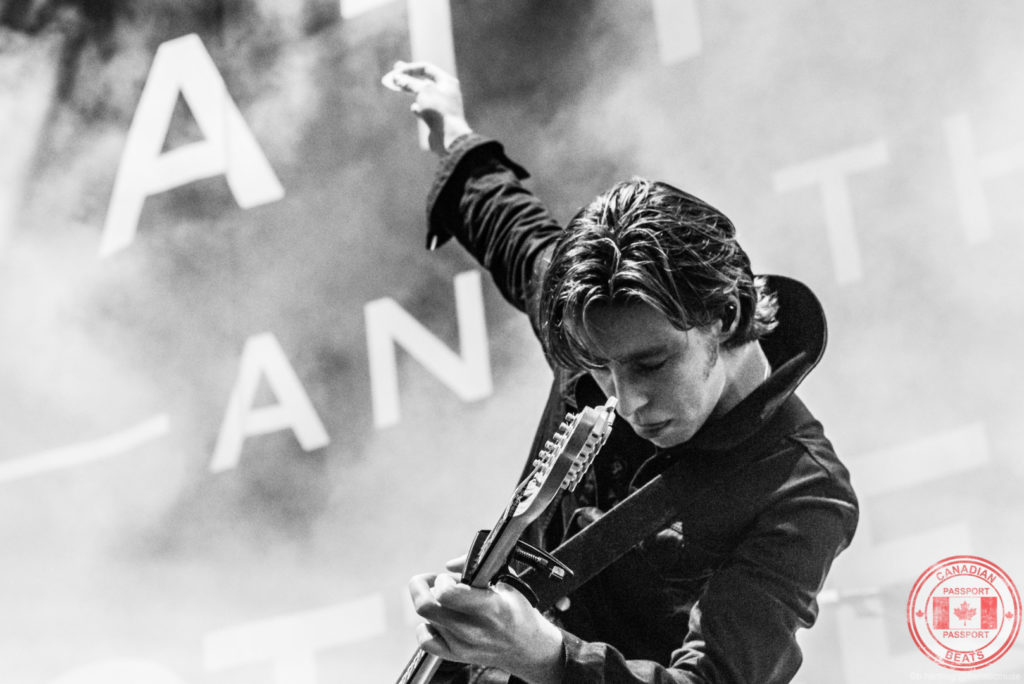 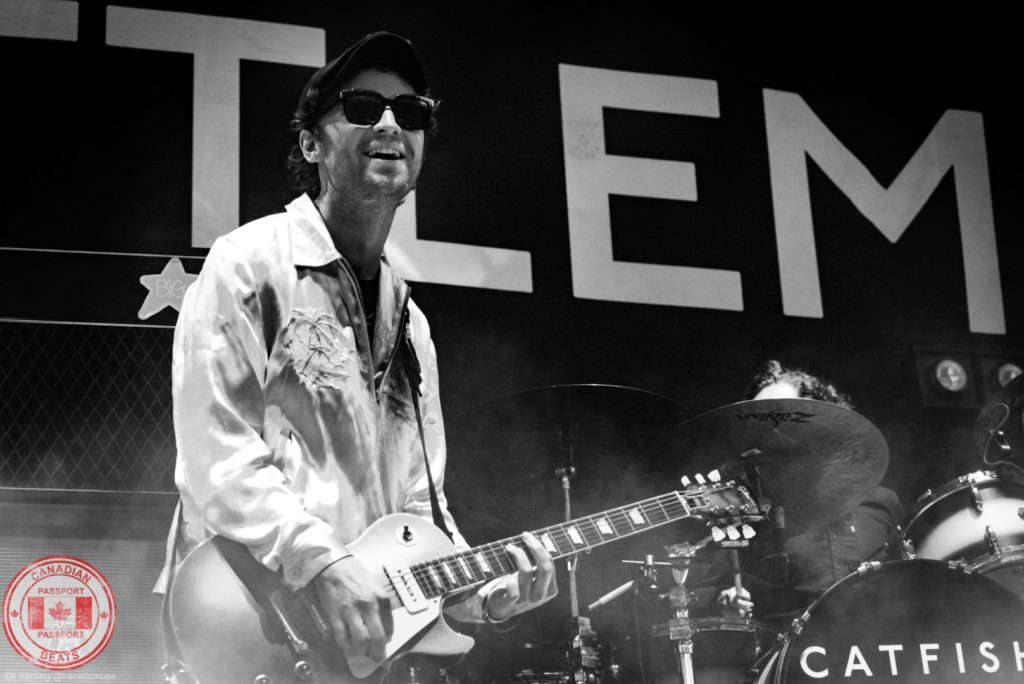 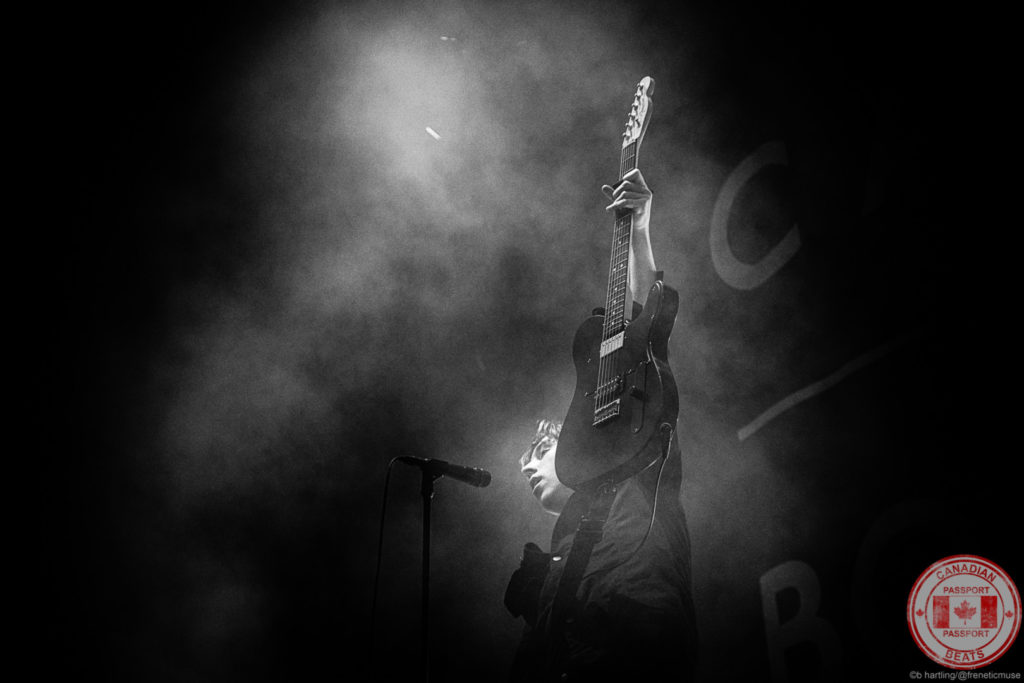 Prior to Green Day taking the stage Queen’s “Bohemian Rhapsody” echoed from the venues PA, as it has for some time now at the band’s live shows, and as expected, the crowd burst into a sing along in unison without missing a note. Immediately after The Ramones’ “Blitzkrieg Bop” filled the air as a familiar Drunken Pink Bunny stumbled on stage to delight fans with its antics and throw out a couple of stuffed bunny plushies. Once the costumed entertainer was ushered off the stage by a crew member the band wasted no time taking to the stage with a blistering rendition of “Know Your Enemies” which was almost drowned out from by the roar of the crowd. Towards the end of the song, the first of several fans was brought on stage to sing the final chorus before stage diving back into the audience and crowd surfing to across the pit. 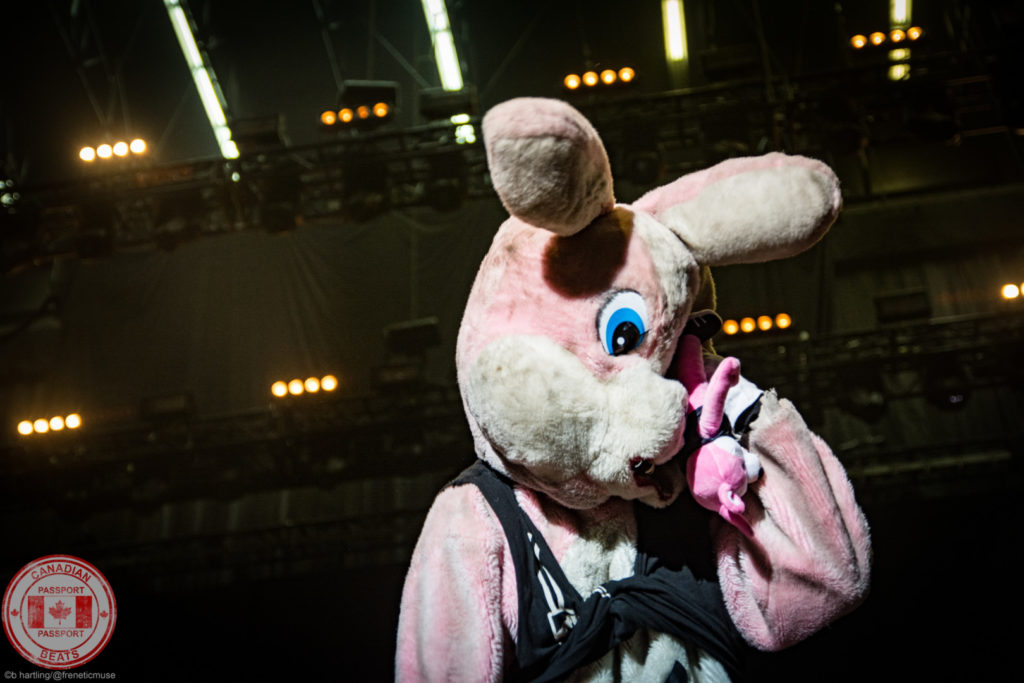 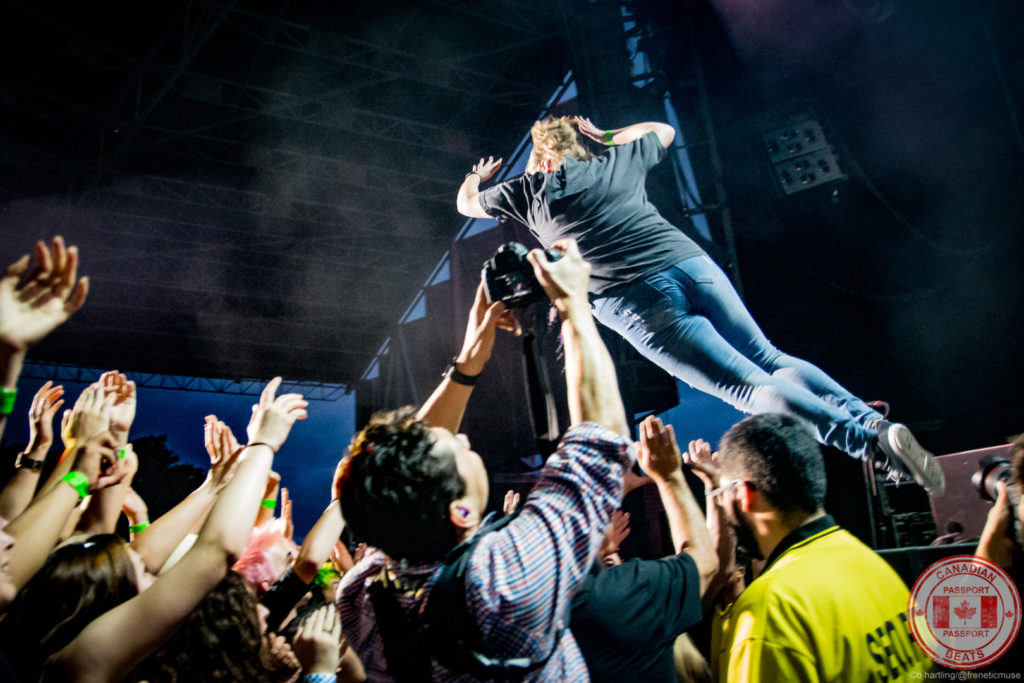 With such an extensive set list the band easily incorporated songs from throughout their long career but it was undoubtedly the classic hits that got the biggest responses. “Boulevard of Broken Dreams”, “Longview”, “Basketcase”, “She”; to name a few; had the audience fired up from the first note. Reaching even further back into the catalogue mid-set old school fans were treated to a rendition of 2000 Light Years Away.  Between songs, Armstrong constantly encouraged the crowd to put down their phones and enjoy a real experience connecting with the band “I don’t want to see any selfies tonight. I’m sick of that bullshit! I wanna see your eyes!” he told the crowd.

During the band’s cover of Operation Ivy’s track “Knowledge” they once again brought a fan on stage, this time to play guitar in the form of a 9-year-old boy named Riley. After a brief lesson in the required chords Billie Joe set him loose and the crowd they didn’t fail to make him feel like a rock star. When the song wrapped up and young Riley tried to hand the guitar back Armstrong shock the boy telling him he got to keep the guitar. 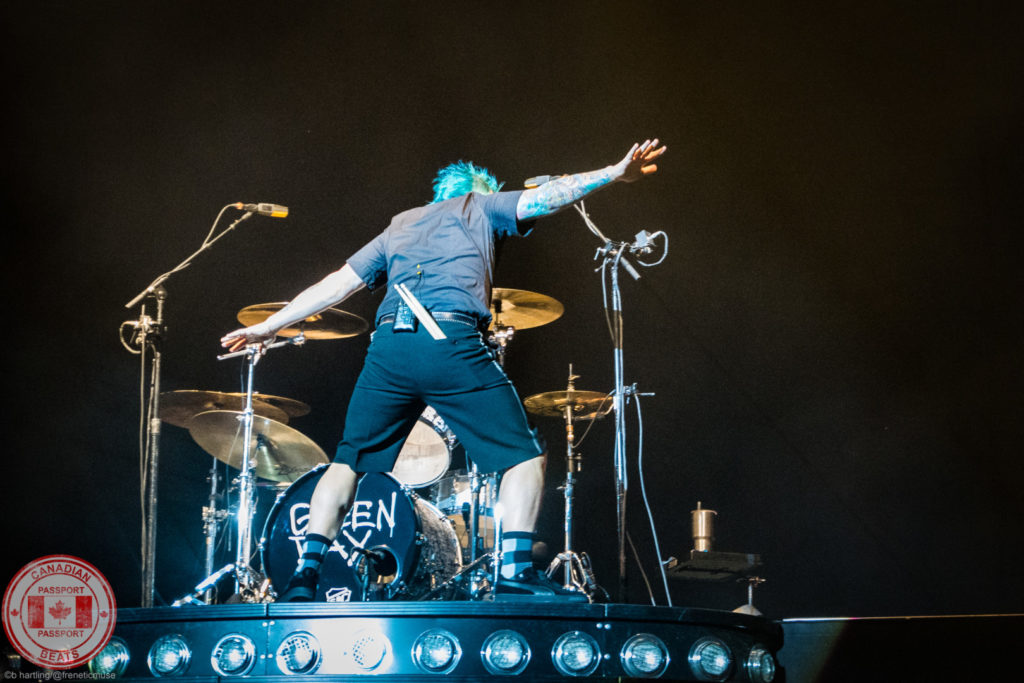 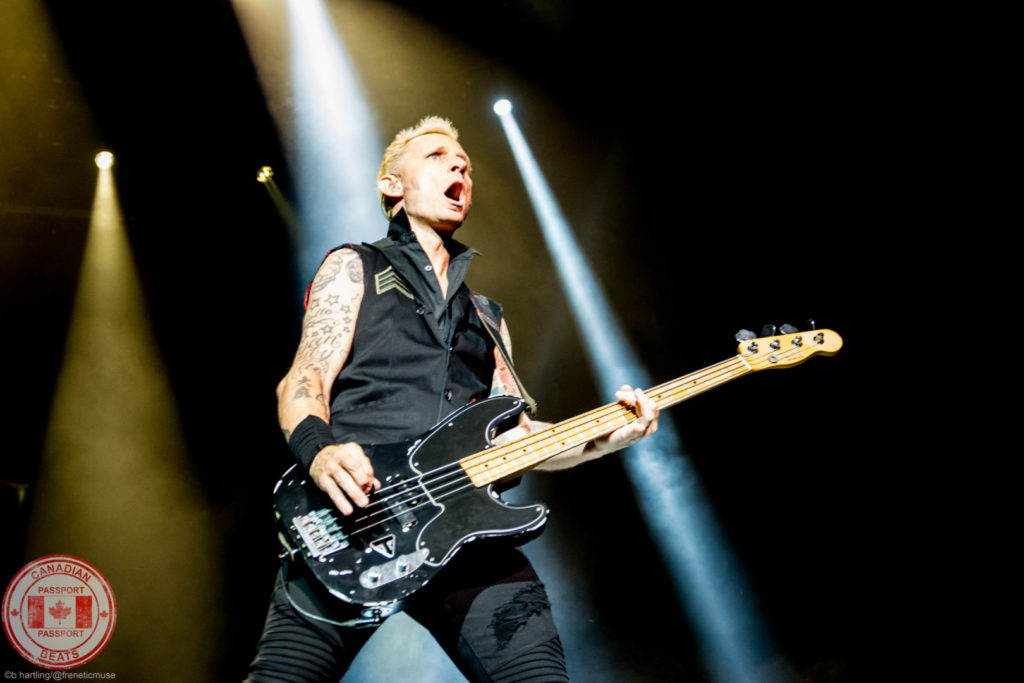 Throughout the set the singer didn’t hesitate to commentate on the political situation in his homeland, early in the set telling the audience they were happy to leave the bullshit at the border. Towards the end of the set, the band took a bit of a breather, lying on stage to no doubt recover some of the energy expended during their very physical performance, they led a sing along of a medley of “ Shout”, “Always Look on the Bright Side of Life” “(I Can’t Get no) Satisfaction” and  “Hey Jude”. During the transitions, Armstrong once again went political telling the crowd “Man the world has gone mad. Your neighbours have gone absolutely batshit crazy. You know who I’m talking about!” After which he fell into a well-received rant about his disdain for racism and nazis and the importance of inclusion, wrapping up by screaming to the crowd “Canada you are the leaders of the free world!”

To end the night off we were treated to a pair of encores, the first consisting of “American Idiot” and “Jesus of Suburbia” and the second comprising a solo acoustic performance of “21 Guns” by Armstrong and ending with “Good Riddance (Time of Your Life)”.  2 and a half hours and not once did the audience sit down, not once did the band half ass it. I’ll admit in my younger years I fell in love with Green Day. I was with them every step of the way up until Warning until my life and musical tastes took me in another direction, though I never had the opportunity to see them live. Friday’s show reminded me why I used to be such a fan. I am privileged in what I do in that I get to see a lot of concerts, more than most. That said Green Day’s Revolution Radio tour with Catfish and the Bottelmen supporting was the most genuinely fun show I have been lucky enough to attend in a long time. 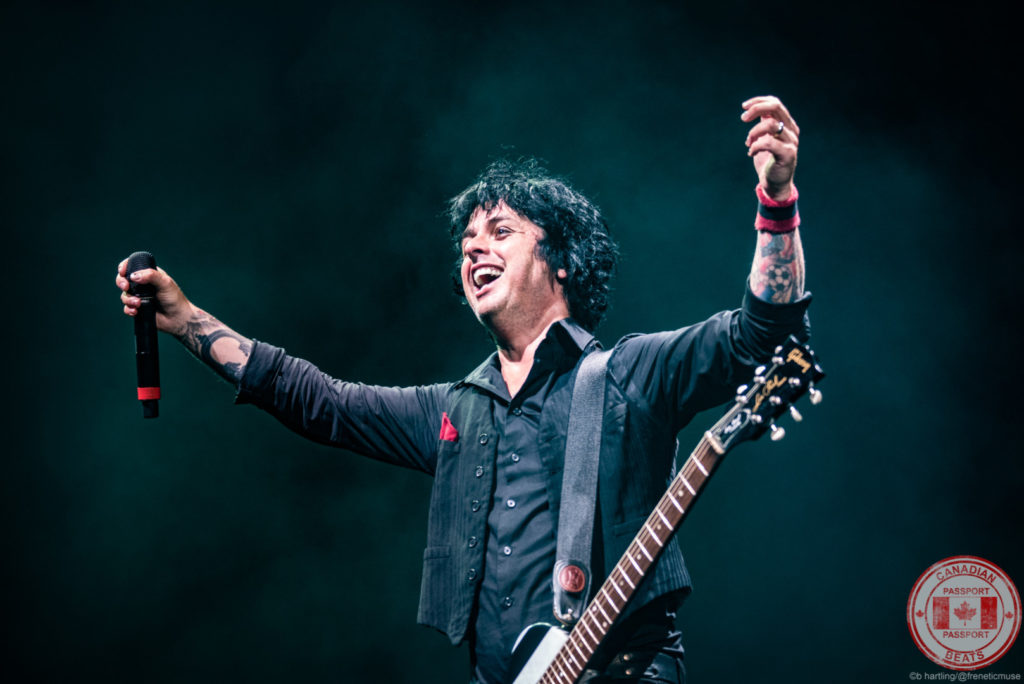 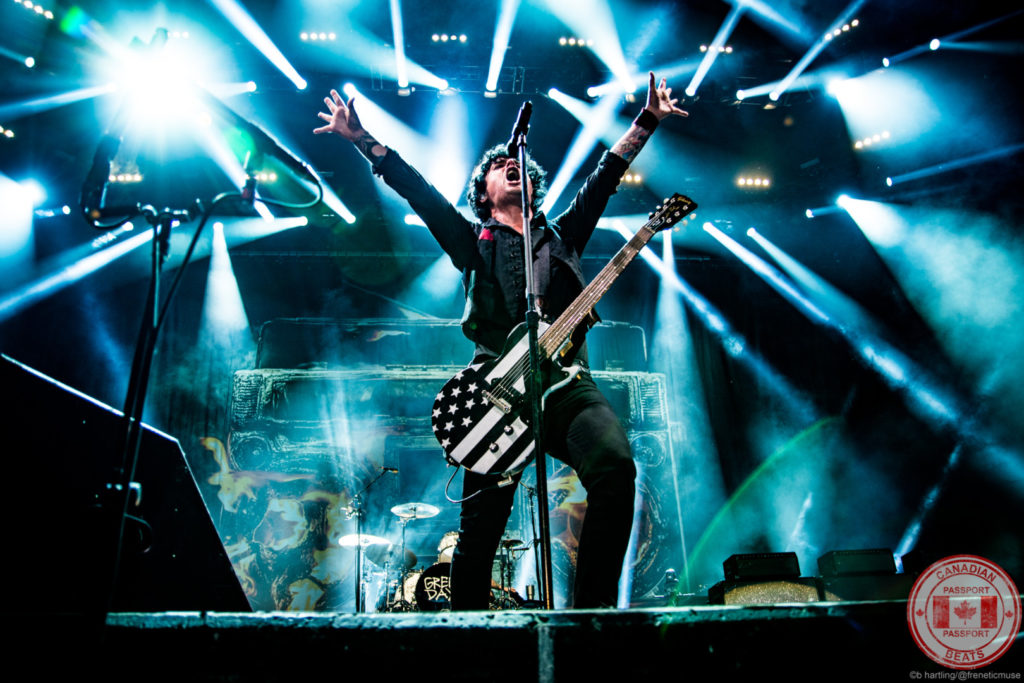 For more shots from the show visit our Facebook page.