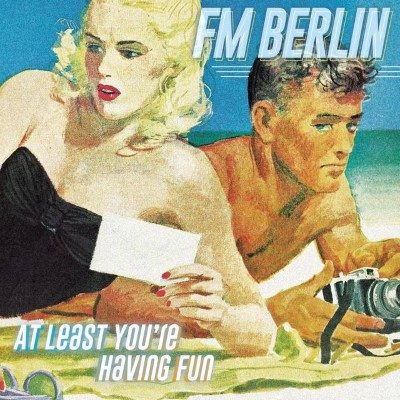 Moncton’s FM Berlin began their days as 60 LPs, and began making waves in the local scene from almost day 1. Releasing their first recording, a 6 song EP titled In the Interest of National Security in 2013 and the following year winning the Music NB Emerging Artist award the quartet have proven themselves to be the rare local band that can draw a midweek crowd in a small East Coast city. As such the band’s second release, At Least You’re Having Fun, has been highly anticipate in the ensuing years.

The sophomore release presents to the listener exactly what one expects in terms of a second outing… a more polished sound, noticeable growth and improvement in song writing and musicianship as well as an overall more professional sound. Over and above that however we see that the rebranding under a new moniker was only the most visible change taking place within the group. Along with the new name we find a completely different sound, not only more mature but far more skilled as well. Be it the pronounced vocal control singer Corey Hachey displays throughout the recording or the seamlessness of the bass and guitar work. Perhaps the most (pleasantly) surprising aspect of the album is the tightness drummer Charline Gautreau displays while still having an experimental feel.

The first word that comes to mind with a primary listen is timeless. With immediate influences of The Cure and The Smiths easily detected alongside tracks like “All Again” with a distinctly 50’s feel and sound and “Halagonia” with its modern prog rock vibes it’s often difficult to place the album in a specific era or genre. “Plasma TVs” sees Hachey all but channelling British rock Sting circa Zanyatta Mondatta while the first single “Yer Honour” hits you square in the jaw with heavy Oasis influences.

Lyrically the album comes across as heavy on the love gone awry end of thing yet manages to never be sad or depressing. With a catchy hook and easy, though somewhat formulaic, lyrics a song like “Ransom” could easily be the next pop hit. Without question however the real gem on the record is the title track, At Least You’re Having Fun. The track is deceptively simple on first listen but quickly unfolds into melodic and lyrical complexities that will have even a casual listener hitting loop and is, in my opinion, the most likely track on the album to put the band over.

It’s far too easy for a band to become “the lead singer and some other guys”, FM Berlin’s latest manages to avoid that, coming across as a truly group effort. With each listen the ear picks out yet another piece that ties the whole together and without which the rest would not work. Drawing on influences across the board the quartet offers something for everyone in the 9 track record which is nostalgic without being melancholic, resigned without being bitter, hopeful without being saccharine. If you had to have a break up album written about you At Least Your Having Fun is the record you would want it to be.