Home / Promos / The Great Trail comes to Ottawa on August 26

The Great Trail comes to Ottawa on August 26 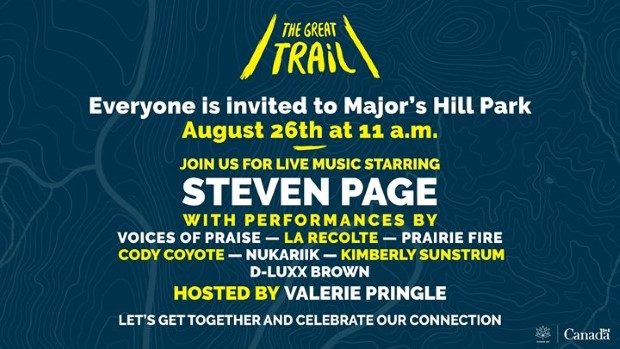 The Great Trail spans across 22,000km across the country, through all 13 provinces and territories.  To celebrate Canada’s 150th and the connection of the Great Trail, Trans Canada Trail is hosting the Great Trail Cross-Canada Connection Celebration on the afternoon of August 26 at Ottawa’s Major’s Hill Park; that will be headlined by former Barenaked Ladies’ frontman, Steven Page.

In addition, the afternoon line up will also feature a stellar list of local Ottawa artists; that will also be on hand to welcome Hudson’s Bay’s Grand Portage, a fundraising initiative developed by the retailer in support of Trans Canada Trail in celebration of Canada’s 150th Birthday.

Here are three Capital artists scheduled to be spotlighted as part of the Great Trail Cross-Canada Connection Celebration.

Although born and raised in Ottawa, Cody Coyote celebrates his Ojibwe heritage through his unique experimental hip-hop sound.  He will be joined by traditional dancers during his performance at 12:45.

Founding member of Ottawa’s Queer Mafia, D-Luxx Brown is a Punjabi political/social activist and DJ who has opened for the likes of DJ Bear Witness of A Tribe Called Red.