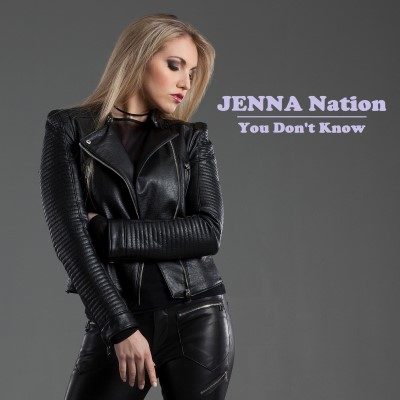 Toronto’s own JENNA Nation is about to release her new album, You Don’t Know in September and we were happy to catch up with her to chat for this segment of Five Questions With! Enjoy!

My artist name is JENNA Nation. I am an R&B singer and songwriter based out of Toronto, Canada. I was born in Ottawa and began singing as soon as I could make sounds. I grew up in a musical family so my music career has always been supported which is amazing.  I began getting more serious about it at the age of 7 when I began singing lessons and doing competitions. I had my first professional gig at age 9 singing on Parliament Hill as part of the Canada Day Celebrations. Once I had a taste of that type of level of performance and audience I knew that it was what I was born to do! From there, I began to become more serious about my music, studying classical, jazz and musical theatre as well as piano, saxophone and music theory.  As a teenager, I completed two jazz albums. I was doing all sorts of shows and performances appearing on national television and radio and performing at major international venues and music festivals. After high school, I attended the Berklee College of Music on triple scholarship for 4 years, completing my degree in Vocal Performance. At Berklee, I was exposed to so much and really had the chance to experiment and develop myself as an artist. I began to get more serious about songwriting and from there I realized that R&B was what felt the best for me. Coming out of Berklee, I was invited to Music World Entertainment, Matthew Knowles’ (Beyonce’s father’s), label and studio in Houston, Texas where I wrote and recorded my third album, which was self-titled and was my first album of all original material. There was also one song on the album that was written and recorded in Copenhagen, Denmark where I was invited to work. It was an incredible experience and I learned so much in the process! It has had world-wide airplay. I then continued to perform and write music and I have been doing a lot of travelling as a result. I have just completed my fourth album, “You Don’t Know” of all original material, which has a strong 90’s R&B influence as well as incorporates some of my other influences like jazz, and hip hop.  I had the chance to work with Grammy and JUNO winning and nominated producers and songwriters on this album in NYC, LA and Toronto.  I see myself as a career artist and I want to spread positivity and continue to make music that people can relate to and want to hear years down the road!

Coming from a background in many genres, including classical, jazz, musical theatre, R&B, soul, neo-soul, pop, and Latin music, it was initially difficult for me to narrow in on a specific sound and style. I love it all! As I began to write my own music, I learned that R&B is what seemed to come the most natural to me. I listen to many types of music but most often I have 90’s R&B and hip hop playing in the background in my house, or when I go to the gym. My music really has a strong 90’s R&B influence with soulful vocals and underlying beats that groove. When I write I often like to sit down at the piano or work with a producer and come up with the beat and song from scratch. Most of my songs are relationship and love based as it is something that I feel comes easiest for me to write about but I also like to talk about what is going on in the world around us. I keep a lot of notes and voice notes in my phone because I can be inspired at any time, whether it’s a phrase that someone said or a sign or a conversation that was had… anything can inspire me at any moment.

I have shows every week! You can find me almost every Thursday at Hapa on College Street, and then I perform at Poetry Jazz Café in Kensington Market monthly. In September I will be starting a residency at Harlem Underground on Queen St. and I will be there a few Fridays of every month. In September, I will be co-headliner at two major Atlantic festivals. One is Sept. 2 in Dartmouth/Halifax, Nova Scotia and the second is Sept. 4 in St. John, New Brunswick. I am currently working out details for European festivals next summer. This is the outcome of a recent successful mini tour in Holland where I was showcased at New Skool Rules, the largest international Urban Music Festival and Conference where they invited me back as their guest next year. Other than that, it’s usually the odd venue in Toronto as well as music festivals. During my performances, I really feed off of the energy of the audience but I give it my all every time! I enjoy performing my original material as well as doing some fresh takes on R&B cover songs. It’s great when I have my live band with me as well! I enjoy the studio thing but I really come alive on stage!

That’s a tough question to answer but I think I would go with my song “Turning Back Time” as I think it is one of the best songs I have ever written. As it is a stripped down ballad with just vocals and guitar I think it appeals to a wide audience.  This song is on my upcoming album “You Don’t Know”.

There are a lot of talented artists in Canada. My current favourite Canadian artists, well known and on the come up are; Drake, Tory Lanez, Emerson Brooks, Brandon Brown, Mez Mariye, illVibe and Myer Clarity. Always have to support your fellow Canadian artists!