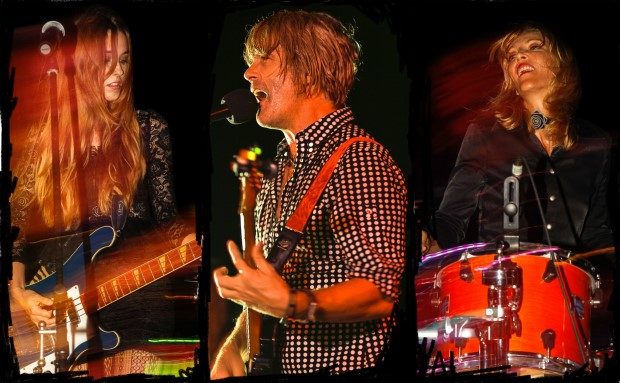 Still Eighteen is a Canadian alternative rock band made up of Joey Ciotti, Samantha Ciotti and Karen Ciotti. The three released their debut EP late last year, and now we are happy to premiere their brand new video for “Bullets & Dust”, which is the title track from said EP. So check the video out below, along with our newest segment of Five Questions With featuring these talented rockers.

Hi, we are the alternative rock band, Still Eighteen. We consist of Joey, lead-singer/guitarist/co-writer, Samantha, vocals/bass/co-writer and Karen, drums. We released our debut EP, Bullets to Dust, in December 2016, and we have been fortunate to be performing at the world’s largest Hard Rock Hotel, where our audiences consist of people from all over the world. We also had the wonderful opportunity of performing recently in some epic venues in historic cities in Italy.

Joey was a former lead singer of Platinum Blonde and Trixie Goes Hollywood and was very active in the Toronto music scene back in the day. However, Joey dreamt of one day living life on a tropical island and in 2001, he realized that dream and moved to Dominican Republic with Karen (his wife), and Samantha (their six year old daughter). Living on the island had a profound effect on Joey. Alongside the breathtaking scenery, and the incredibly friendly local people, existed pronounced inequality and social injustice. This led Joey to write songs that speak about these issues.

When Samantha was a little older, she caught the music bug and learned to play bass and would often jam with Joey. Growing up in a developing country also had an impact on how Samantha viewed the world, writing songs with her dad about topics they cared about was a natural progression. Joey and Samantha are now a powerful writing duo, having co-written many of the band’s songs, including the songs from Still Eighteen’s debut EP, Bullets to Dust. Karen didn’t want to be left out, so she picked up the drumsticks and Still Eighteen was born!

We have now been dubbed a “rock protest trio” by Tim Whale of Emerging Indie Bands. We like that — it is our hope that our songs inspire change. J

We’re fortunate to have the world’s largest Hard Rock Hotel here on the island and we play there often. We are now planning dates in Europe for early 2018. We are especially excited to tour Canada and we are currently seeking out the right people to help make that happen!

Our live performances are dynamic and entertaining. We always do our best to put on a great rock show!  Our audiences are really excited and surprised when they find out we are a family. They tell us that they love our originals and that the band is inspiring. We are always very appreciative when we receive these comments; knowing that we have impacted someone positively is very rewarding.

It would be our song, “Bullets & Dust”. We are very proud of this song.

Samantha is a big fan of Joni Mitchell and when she was little, she was obsessed with Avril Lavigne. Samantha also loves up and coming Toronto band Goodbye Honolulu and attended one of their shows this year. We also all love Alanis Morisette. Speaking of Canadian artists – we were all in Shania Twain’s new music video for her song “Life’s About to Get Good”, which was a blast to be a part of!

“Thank you to Canadian Beats for premiering our music video for our song, Bullets & Dust and for all of the work you do for the Canadian music scene!”