Drake Jensen talks about his new single “Go Your Own Way” 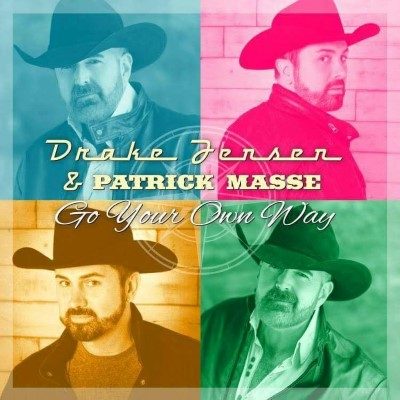 Drake Jensen released the powerful song “Go Your Own Way” June 5, 2017 and has found an overwhelming amount of support and success with the single. Jensen enlisted the help of fellow Canadian country music artist Patrick Masse to bring the song and their community together. “Go Your Own Way” carries the strong and positive message to do just as the title suggests; to grow up as you are and be who you want to be.

Written by Kevin Fisher, Tia McGraff, and Tommy Parham Jensen tells Canadian Beats just how the song made its way to him; “‘Go Your Own Way’ came my way by Tia McGraff. Tia and her husband Tommy Parham went on down to LA and wrote the tune with Kevin Fischer. The lyrics directed the song my way shortly after Tia cut the demo. Tia and Tommy said it was a Drake Jensen song.”

With the release of the single Jensen and Masse have released a video for “Go Your Own Way” as well as launched the Go Your Own Way Project on Facebook. The Go Your Own Way Project promises to be “a positive and interactive space!!” Followers are encouraged to post pictures and video expressing their own connections to the song and how their own stories. “The GO YOUR OWN WAY project is surrounded with positivity. There is a page on Facebook we just started, but were are also starting a Canadian tour and the message will be spread to fans across this great nation. Just be yourself and the rest just follows is the message. Inspired by a song, brought to life by fans of the music!!” says Jensen.

Jensen’s career centralizes in Ottawa, ON by the way of Cape Breton Island, NS and Masse who hails from Vancouver, BC maybe have been separated by three provinces and the great rocky mountains, but their friendship grew and they both realized they had the same musical vision. Jensen shed some light on how the two came together for the song; “Patrick Masse and I had been friends for a few years, and always said we wanted to work on something together. So when a song came by with a message as powerful as this it was an obvious path for us. Having Canada’s two LGBTQ male country artists’ together makes a bit of history to us.”

Since the release of “Go Your Own Way” Jensen has been hard at work to bring the song to radio and make sure he has been getting out in front of his fans to perform the song. Jensen explained to Canadian Beats just how busy his schedule is these days; “We are in the Maritimes starting in Charlotte town PEI, then to Halifax and finishing in Cape Breton. Then back to Ottawa to headline a fundraiser show for “Bruce House” a house for people dealing with having HIV. Then onto the OttawaPride MainStage. Following this a trip to the UK to perform in London, England. A book was written called “David Bowie Made Me Gay” 100 Years of LGBTQ music, and I was written about in the country chapter for me representing advances in country music starting to accept LGBTQ artists. I will be performing at the British Library and sitting on a panel talking to press about my experience thus far in the industry. Shortly after Patrick and I headline an LGBTQ arts festival. “OUTFEST” will include us headlining an opener concert and visits to local schools talking about the message of “Go Your Own Way.” We finish with a Toronto to Vancouver and back Via Rail tour after being accepted for the Via Rail onboard live music program.”

With its powerful lyrics, “Go Your Own Way” has been added to stations across Canada and the support Jensen has received has been very positive. “The support is really great. I recently embarked on a cross Ontario radio tour and the response was really positive. These are turbulent times as an independent artist, and this amount off support can make a career. Patrick and I really appreciate all the positivity surrounding the song!!”

In addition to the official music video, Jensen has also released the official lyric video for “Go Your Own Way” so that the message of the song can be shared alongside its strong lyrics. With appearances wrapping up on the east coast and a few scheduled in Ontario Jensen will continue to promote “Go Your Own Way” well into the fall. Keep your eyes and ears out for Jensen on the road and request “Go Your Own Way” at Canadian country radio!