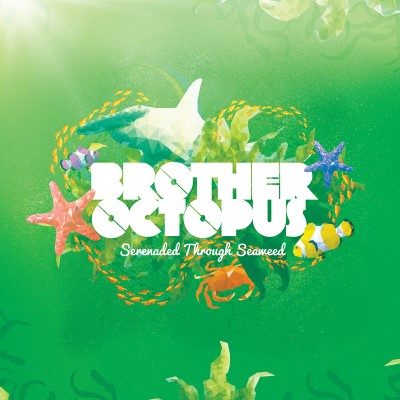 If Edmonton-based band Brother Octopus’s bio doesn’t win your heart, who knows what will—fresh, quirky, and good-humored, it reads as, Brother Octopus isn’t your typical cephalopod; he sometimes has the ability to take a human form and create musical compositions. Originally from the Pacific Ocean, Brother Octopus has assembled a team in Edmonton, Alberta. The team consists of Little Guppy, Golden Boy, Dogfish, New Guy, and Brother Octopus himself.

Adorable? Undoubtedly. Too weird for your tastes? Hang in there; I promise their music won’t be.

At first glance, their new album, Serenaded Through Seaweed, may seem reminiscent of Owl City, what with its fresh-faced vocals, earworm rhythms, and good-natured atmosphere. However, a myriad of guest artists—all Alberta-based, all varied in their sound and style—ramps that familiar sound up to a new level, layering all eight tracks with good humor, a fresh take on music, and a feel-good catchiness to each one.

Opening song “Adventure Island” ft. Soap Box duo is an indie-pop track that strikes the perfect balance between serene and upbeat. With its slow-swaying, gorgeously woven male and female vocal harmonies set to a bop-along backdrop, “Adventure Island” is earnest both in atmosphere and lyrics: optimistic, divinely voiced, and originally composed, “Adventure Island” is fun without losing its dedication to being real music.

Serenaded Through Seaweed bobs and weaves through a rainbow of genres—electro-indie, rap, rock, and pop—and bounces between feeling first tropical, then lackadaisical, then reminiscent of Daft Punk at times in tracks such as “On My Own” ft. Soft Violence. And yet, the album somehow never loses its distinctly Brother Octopus feel. It isn’t straining to cater to a variety of listeners: every track comes across as genuine, soulfully written, and earnestly composed.

Late-track “Impatient” ft. Letters From Pluto delves back into that vaguely Daft Punk, futuristic feel, dipping its toes into an edgier vocal lead. With that catchy instrumental backdrop retaining its role as the unbreakable backbone, even a song as genre-bending as “Impatient” still comes across a fun, head-banging club beat, the downbeats begging listeners to take part in what is easily one of the catchiest albums of the summer.

Original, eclectic, and unfairly catchy, Brother Octopus’s Serenaded Through Seaweed is absolutely not an album to be missed.