The 38th annual Calgary Folk Festival took place July 27th-July 30th on the beautiful Princes Island Park. The genre defying festival featured over 70 artists from all over the world on seven different stages. Artists perform across the four day festival and many participate in workshops. The workshops have many artists coming together on different side stages throughout the grounds, jamming together and talking songwriting. The festival is a favourite for many music lovers and artists alike. Here’s a little bit about just some of the amazing talent featured at this year’s folk fest.

Couer De Pirate is an artist with a 60’s style French pop with a touch of North American folk. This award winning artist played flawlessly, it didn’t matter what language she sang in, the audience enjoyed every second. 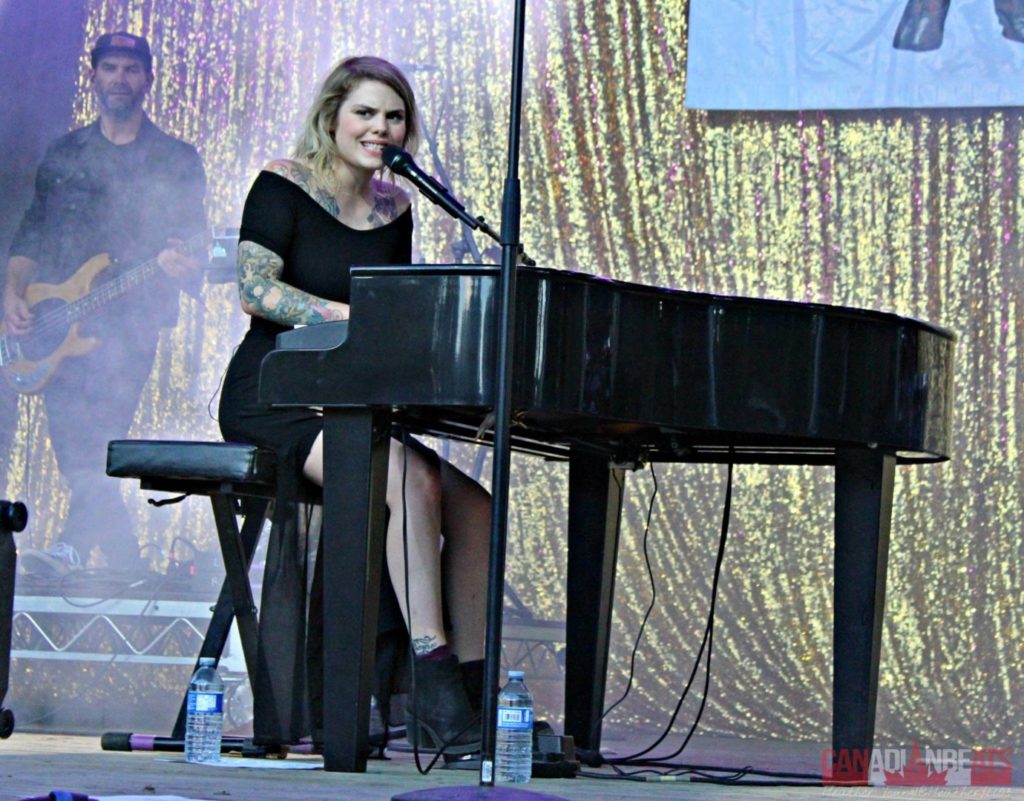 Basia Bulat is a folk singer/songwriter from Ontario. Her stage presence was incredible right down to her sparkling outfit. Bulat is known for performing with an auto harp, but didn’t stop there, she mastered every instrument she picked up with powerful vocals.

One of the highly anticipated headliners was Canada’s own City and Colour. Dallas Green played a beautiful acoustic set that was authentic to the core, completely captivating everyone within ear shot. City and Colour is the product of a solo project from Alexisonfire’s  Dallas Green. After releasing his first full length solo album in 2005, Green has seen huge success as a solo artist.

Calgary’s own AM static played numerous times throughout the festival and participated in workshops as well. AM Static earned a juno nomination with their first full length release in 2016, A Life Well Lived. Pretty impressive for a non touring local band.

Langhorne Slim was one of those golden musical finds. The American singer/songwriter is an alternative rock/folk artist that has been featured in Rolling Stone’s editors top ten picks with his song “Electric Love Letter”. After seeing him play I’m sure he will see some huge Canadian success.

Tanya Tagaq was definitely a fan favourite. An Inuk throat singer, she hypnotized the audience with her diverse and incredible talent. Anyone we spoke to during the festival always mentioned Tanya and her performance, and how much they were blown away by it.

BADBADNOTGOOD also took to the stage during the festival. The band started as a class project and has taken off ever since. The band has an electronic sound with just the right amount of jazz. The thing I noticed, besides the kick ass music of course, was how they engaged the audience with an undeniable charm.

The Barenaked Ladies closed out the second last night with their incredibly fun set. The legendary Canadian band are the voices behind mega hits like “One Week” and “Pinch Me”. They kept the audience energetic after a long hot day with their catchy songs and killer dance moves.

Lindi Ortega was also a crowd favourite throughout the festival. With her powerful vocals compatible to the great Dolly Parton, she is a storytelling, old country singer/songwriter.

2017 Juno winners The East Pointers were also a huge presence at Folk Fest. The P.E.I based musicians rocked the stage every time they stepped on it. The fiddle experts sure know their music, with generations of musicians in each of their families, they worked the crowd and had everyone dancing.

Terra Lightfoot is an Ontario based artist with raspy and bold vocals that entranced her audience. She released her debut album in 2011 and has been compared to the likes of Joan Jett.

Irish alternative rock/folk artist Foy Vance also graced the festival with his undeniable talent and amazing moustache. Vance has toured with nonother then Ed Sheeran and has 3 full lengths under his belt. This man has an insanely powerful voice that you can’t help but stop and listen to.

Closing out the Calgary Folk Festival on day four, Blue Rodeo. The Canadian treasures formed in 1984 and have since released 15 full length albums, 4 live albums, 1 greatest hits albums, and many solo projects and collaborations. Making them undoubtedly one of the hardest working bands in the business. You aren’t Canadian if you don’t know at least 1 Blue Rodeo song. They were the perfect way to end such an amazing experience. On their last song, they invited other festival artists on stage to help them perform their hit “Lost Together”, treating the audience to a one of a kind and beautiful performance.

The Calgary Folk Festival was definitely a summer highlight for myself and many others. The festival was very well put together and organized by hundreds and hundreds of hard working and dedicated volunteers. And their work did not go unnoticed, as many artists and Festival workers came together dedicating and performing A heartfelt thank you with the song “The Weight” closing down the 2017 Folk Festival.  And of course, not only was the festival itself flawless to the core, but the music was absolutely incredible. If you haven’t been to the Calgary Folk Festival, make sure to grab tickets for next year’s show. It doesn’t matter what genre of music you’re into, if you love music, this festival will blow you away.

For more photos from Folk Fest, head to our Facebook page!