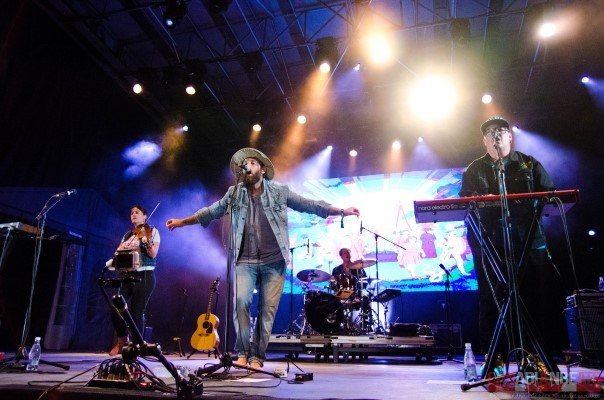 Since the release of their hit single, “Spirits” The Strumbellas have been busy touring, playing festivals, and working on new music. We sat down with them at Festival D’été de Québec before their summer tour to discuss the differences between live music scenes abroad, their favourite music, and songwriting.

In the midst of festival season, you’re embarking on a tour including dates in Canada, the United States, and Europe. What’s your favourite part of being on tour?

Izzy: It’s been really fun the last week and finishing up this week playing a lot of shows in Canada, cause we haven’t had a chance to come back so I’ve really been enjoying that, I’m looking forward to tour dates in Saskatoon and New Brunswick. It’s just great to play in Canada again!

Darryl: For me it’s always having the chance to go to Italy and Germany, we’ve had so much success there with “Spirits” that to go back there and see the support from fans in those countries is just so incredible. We’re dipping into Austria and Switzerland as well so anytime we go to Europe it’s just incredible to be part of that culture and they just have this whole different vibe around their live music scene so it’s really special to be a part of it.

What’s the biggest difference between the live music scene in Europe and the one in Toronto?

Darryl: I feel they just seem to be a little more attentive overall and just really zoned in on the show. It seems to me everywhere you go they’re just really focused on what you’re doing and how you’re playing and the party doesn’t fit into it as much – like the big dance party-  it eventually gets there but on so many occasions they’re just so much more intent. In Toronto, there’s a little bit of a gap sometimes.

Izzy: People are trying to be too cool.

Darryl: Yeah it takes a little bit of time for the crowd to warm up to you in Toronto, but it’s right away in Europe.

That is an issue that a lot of bands have said about Toronto. Have you ever had an experience where that was bringing down the vibe of the show?

Izzy: I think we just think of it as a challenge, like if we’re at a show and people are kind of too cool for school it kind of is an exciting thing to be like, “We’re gonna make them come around,” and by the end we can usually win people over, and that’s a good feeling so it kind of balances out some of the negative vibes.

Speaking of “Spirits,” over a year later that song is still everywhere and people are jamming to it all the time. When that song first came out were you expecting it to have that much success and to achieve that longevity?

Izzy: Absolutely not, we weren’t. We kind of just recorded the album, we were excited about “Spirits” but we were excited about a lot of other songs and I don’t even remember how we picked “Spirits” but we were just like, “Okay we’ll release that first and see what happens,” and from that moment until now, which is over a year later, it’s just been amazing to see where it’s gone and how it sort of moves across the world and even in Canada, starting out on smaller stations and moving to rock stations and then moving to pop stations and just seeing that evolve. I don’t think I would have ever expected to hear us on top 40 radio and then Europe, as Darryl mentioned earlier, it’s been really wild.

I understand that “Spirits” was kind of put together through old voice memos and it had to be put together like a puzzle, is that something that happens a lot in the songwriting process? Do you find that you’re picking and choosing between different songwriting sessions?

Darryl: Yeah it really depends on the song, sometimes a song can come together very quickly and it seems to make sense, like “Shovels and Dirt” was one that Simon wrote quickly and we all connected with it. With “Spirits,” yeah I think we got into situations where we like one verse but we can’t find a chorus or we like a chorus and we can’t get a verse. It becomes this big puzzle game so I would say maybe on half the record it tended to be a bit more piecing together and then the other half songs kind of came naturally and made sense. That’s the challenge of just making sure you don’t ruin a song that’s maybe really good already and you can also take another song and make it better.

I find that you guys have a really good balance between high energy numbers and more vulnerable, emotional songs. Is that a balance that you try to achieve with the album or is that something that comes about more organically?

Izzy: I think we do try a little bit because we love playing those upbeat songs live, especially in a festival environment. It’s really fun so we kind of always have this pressure on ourselves to make fun songs that people can dance to but naturally a lot of the songs we write start off a little more chill. I don’t think we’re doing anything that pushes us out of our comfort zone or is unnatural, definitely everything comes from a natural place and we always have fun with the upbeat ones.

Are there ever any disagreements with so many members in the band, are there every any issues when collaborating with everyone?

Darryl: Again, it depends on the song. Some people are more picky about lyrics and some people are picky about instrumentation. Like a bass part I fall in love with not everyone else is gonna like so you have to leave your ego checked at the door. It’s a saying we keep, leave it outside and in the studio it’s what’s best for the song. But, yeah, everybody has their certain things that they feel strongly about. I think the last record there was definitely some tears and a few screaming matches but if we didn’t have that I don’t think we’d be able to push ourselves.

I’m sure all the songs are kind of like your babies but are there any specific ones that you love to play live?

Izzy: I love playing “We Don’t Know” live. I’m biased cause there’s a violin part there but it’s also just fun. And I love playing “Shovels and Dirt,” that one has become a real fan favourite and people get really into it. There’s this thing where – one guy in Chicago started it and now it pops up every where – people bring cardboard banjos to the shows and hold it up so that’s always really fun cause the crowd gets into it.

Darryl: I think on this record I love playing “Wars” the most cause it’s bassy, like I play with a pick and it’s a lot different than what we’ve done in the past. Recently, we’ve been playing “The Bird That Follows Me” which is off our first record and that’s a song I’ve always connected to. It kind of comes down to what’s your part and what you like to play most. I generally really enjoy all of our songs so the ones I get to hone in on and shine are fun.

So you mentioned “We Don’t Know” and I really like that one, its a very inspirational song but it has a very silly, fun video so what was the thought process behind choosing to do that concept for the video?

Izzy: We actually had a really serious, dark idea for the video and it was gonna be pretty dark and sort of confessional style video but we just couldn’t make it work and we were in this mode where we wanted to show the silly sides of our personalities cause a lot of people were getting to know us through “Spirits” or maybe they knew the song and didn’t know who we were and John one day just said, “We should do something that’s like a 90s fighting game,” and it kind of was a joke, but it turned into a real video. It happened really fast as we were looking for something more fun even though it is a serious song. But it has a bit of a hopeful message that maybe the video sort of goes to. We come together in the end to form Captain Strumbella and fight evil.

Festival d’été de Québec had an amazing lineup this year, did you have a chance to see any other other bands?

Darryl: I got to see The Who which was a pretty amazing experience for me and then our time slot lines up with Metallica which might be hard for us to go see them, so I’m hoping after our set we can take the opportunity to see those very nostalgic bands for me.

After playing an unforgettable show at Festival d’été de Québec, The Strumbellas are heading on tour across Canada and the United States for the remainder of the summer and fall. For a list of full tour dates and to buy tickets, see here.