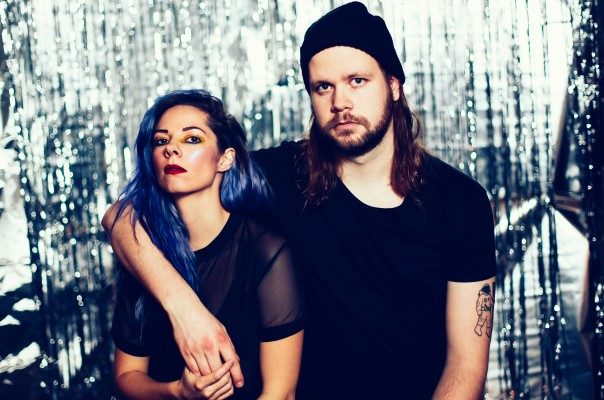 Edmonton based Alt-pop quartet The Royal Foundry are releasing their new album Lost In Your Head on August 15.

Formed initially as a folk duo in 2013, Jared Salte and Bethany Schumacher felt that there was more to say, both musically and lyrically, so they began a revision of their sound, incorporating elements of 1990’s Brit-pop lush production with power-pop stylings of groups like Arcade Fire, but with a healthy dash of old-school, 1970’s progressive rock such as the intricate melodies of Yes and Supertramp. The result is a collection of 13 songs that are not only eminently accessible for music lovers across a truly wide swathe of genres, but songs that are infused with emotional depth and complexity, with lyrics that are elegantly heartfelt and honest.

Hi Jared and Bethany. We love your story! Can you share it with our readers? You are not only partners in The Royal Foundry, but you are also married. Which came first?

Jared was in a high school band that came and did a show at an event that I was organizing. They had arrived early to the venue, so I had to go and open it up to get them all settled, and as I was walking up to them, Jared whispered ‘dibs’ to his band mates. I obviously had no idea this was happening, so I wasn’t at all suspicious when he kept on emailing me and finding ways to connect with me months after the show. Eventually, he wore me down and our friendship developed into something more. 3 years later, we got married! It wasn’t until after we got married that we started songwriting together. Jared, being a producer by trade, had some musical ideas that I put some lyrics to, and that repeated itself.  The weird thing about it however, was that there was never a definitive moment of ‘let’s be a band!’, the entire process was very organic.

How did the band evolve?

It honestly just came to be through us hanging out in the studio, Jared writing music and I would write lyrics and then we would cut a song. It’s always been a very natural state for us, and even now, how we work together is so easy and succinct that its hard to explain. Maybe its being married? Maybe not?

What’s the best part of being married and in the same band?

Its super economic. But also, its cool to discover new places together. It’s basically just like hanging out with your best friend 24/7.

Congrats on your new album “Lost In Your Head”. What was the most memorable part of recording the album?

Thank you so much!! We are very excited for this release! We have a lot a memorable moments, mainly because this album was a lot of ‘firsts’ for us. First time we co-produced with Sam Hanson, who is based out of LA. First time writing more than just an album’s worth of songs. First time stretching our sound to be more unique, upbeat, and finding/experimenting with sounds to give the best sounds…So many…

Is there one song on the record that you feel best represents your musical vision?

“Never Have Time” has both the pop and alt feel that our album encapsulates. There is album a direct split down the middle of pop and alt songs, with the rest being a good balance of both. We experiment with blurring the lines of musical genres simply because we don’t want to be boxed into one definitive sound. And the album artwork reflect that chaos and musical genre mixture visually.

Can you tell us about the making of the video for “All We Have”?

Making ‘All We Have’ was by pure chance. We are lucky to know some pretty talented and awesome people who love to make their busy lives, even more so busy. With the perfect conditions, the perfect locations and the perfect serendipitous encounters with people that pushed the envelope creatively to the next level. Shot almost entirely on drones, down the iconic Route 66, in the middle of nowhere Illinois, we came across a perfectly prestigious 1950’s diner, whose lawn was decorated by giant pink elephants, UFOs and a bike. Whose owners also were proud parents of pet monkeys, and were the most generous of people. Mix that with an accommodating classic Drive-In Movie theatre, with the most perfect sunset.  The entire day was one magical happenstance after the other. An experience we will never forget!

You will be touring across Canada in support of the album. What can people expect to see on stage?

We are making our way across Canada in the Fall in support of our new album release. We are the kind of band that LOVE what we do, LOVE the music we make, and LOVE to share our music with whoever we cross paths with. You will see a highly energetic show, where you get to witness (and feel for yourself) the absolute joy or a bunch of kids rocking their hearts out. A serious good time all around. With some awkward Norwegian Dancing from Jared, who is in fact 100% Norwegian.

At Canadian Beats we like to have some fun with our interviews. Let’s try some random questions:

What is your favourite ice cream flavour?

What is your favourite fast food?

What is one thing about you, either individually or as a band, that most people don’t know?

Beth is obsessed with clouds/storms or weird weather occurrences in general and is a ‘The Weather Network’ geek to the extreme. Jared is a one of those scheduled freaks that actually puts in his calendar ‘brush teeth’. He also thrives off of 4 hours of sleeps and is probably the hardest working musician i have ever come across ;)(I’m not biased).