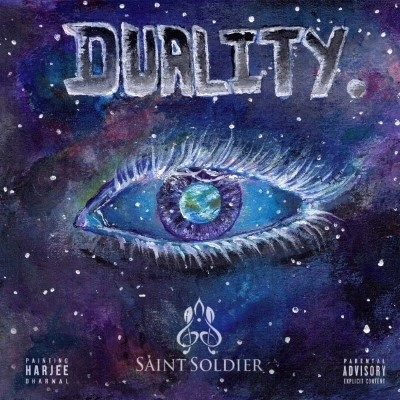 I’ve had my eye on this hip-hop artist for over a year now. I love how he spits pure truth and also that he is a very grammatically sound spoken word artist in this day and age. Hailing from Abbotsford, BC and winning a Fraser Valley Music Award, Saint Soldier is on a mission and will not be slowing down anytime soon. He put a lot of emotion into his second album, Duality and the production of the release is on another level. With all of these amazing tracks, I was in for a tough job to pick my favourites.

Saint Soldier teamed up with DJ Harks and the album was mixed by Mani D, DJ Reminisce and Arnold Dogelis. It creates the perfect assortment of sounds for Saint Soldier to tell his stories through his music.

“A Stray” is all about what the young generation will be going through as time goes on and how it all comes down to the community where Saint Soldier comes from and what he feels about it. About what plagues the youth and how he is hoping for a change to come. There is a video released for this track, and it certainly gives you that visual aspect to the song.

“Mind Over Matter” is another top notch track with a dope feature by Toronto’s Humble. This song is about how certain things are elevated in hip-hop’s lyrical world and how the lyricism is a blessed curse and won’t you let you leave this prison.

I would say that “Namaste” features the best flow on the album. It evokes  such a positive vibe and will make you sing along to the hook, once it kicks in. This is a track I would love to hear on the radio. I believe many people could benefit from this track during their day to day lives. It’s all about “that love that shines through that fake Sh*t”.

“Fly Away” is a fun song about choices. About whether to grow some wings, give everything up about yourself and just “fly away” to the majors or to stay true to yourself and  see if you can do it on your own. Speaking about never giving up in what you’re doing and how the roller coaster ride of excitement is so real. Just be humble and show love to all artists and unite as a community.

So these are my favourite tracks off this album Duality by Saint Soldier. I really want to get this album out there for the hip-hop fans of the world. Saint Soldier deserves to be heard.