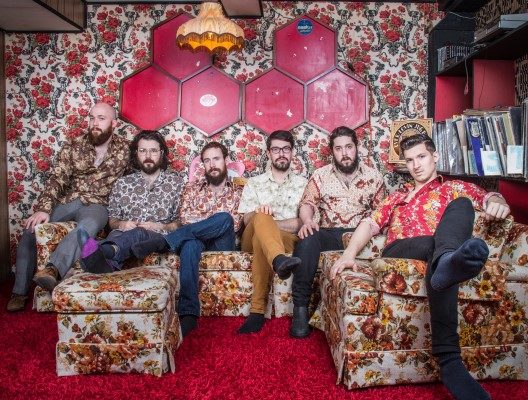 Sudbury’s Murder Murder creates a unique blend of bluegrass and alt country. They have just released a new single and video for “I’ve Always Been A Gambler” which you can see below. The single is from their upcoming album, Wicked Lines and Veins which is set for release in September 2017. It was great to chat with the band in our newest segment of Five Questions With! Enjoy!

We’re a band called Murder Murder based out of Sudbury, Ontario, Canada. There are six of us: Steph Duchesne (percussion), Kris Dickson (upright bass), Sam Cassio (guitar, mandolin vocals), Geoff McCausland (violin), Barry Miles (banjo, dobro, vocals), and Jonathan Danyliw (guitar, mandolin, vocals). We play a mixture of outlaw country and bluegrass. We don’t really know what to call it. Alternative folk maybe. We’ve been playing together for four years and have done a whole whack of tours of the Canadian Maritimes as well as some touring in the UK and mainland Europe. Our third full-length album, Wicked Lines & Veins, comes out in September.

Our music is heavily rooted in the traditions of folk music, especially the old murder ballad tradition (hence the name). However, not all of us come from that musical background, so the final product shows influence from a bunch of more modern musical aesthetics like rock and roll, punk, and progressive rock. A few of us are classically trained or trained in jazz as well, so we sometimes get caught up in engineering harmonized lead instrumental melodies or go off into a time signature change or what have you. Songwriting wise, we’re heavily influenced by the Texas country scene of the 60s and 70s (Townes Van Zandt, Guy Clarke, etc) as well as some contemporary writers like Gillian Welch, Jason Isbell, and James McMurtry. What we try and do is translate those influences into a specifically Canadian setting. We’re averse to the idea of writing about places we’ve never been or really gotten to know. We also deal largely in gothic themes and the grotesque- characters and experiences that are outside of the norms of society. Criminals, tragedy, the inequities of society, etc. Those are the kinds of things that keep our attention.

Sweaty. Like, for real. We try to leave it all onstage every night. The live show is pretty fast paced (unless we’re playing in the morning) and we play a lot of up tempo songs. We’re all usually pretty beat and sore after a gig. Despite the dark themes of the music, the show is kind of a party. People are usually dancing and, onstage, so are we.

This summer we’ve got a great lineup of festivals, some of which have already passed. Coming up we have Blue Skies Music Festival (Claredon, ON), Live From the Rock (Red Rock), The Fred Eaglesmith Charity Picnic (Aylmer, ON), Summerfolk (Owen Sound, ON), and Northern Vibe (Bruce Mines, ON). Come September, we’ll be heading east with our new album for a whole bunch of dates. Beyond that, we have a bunch of more secretive plans that you’ll have to keep your ears open for.

To hear one of our songs to get a sense of us, we (Geoff) would suggest the first track off our upcoming album, Wicked Lines & Veins. “Sharecropper’s Son” is representative of us because it has lots of traditional musical composition, and yet other aspects of the music are very progressive, pretty out-there, and definitely draw on our varied musical backgrounds. It’s also a story that is historically informed and references what once could have been a typical life for many Northern Ontarians. The track is somewhat of a mission statement of our new direction, and we are really happy with how it turned out

There are so many that it’s hard to nail it down to a few. We listen to a ton of Canadian Music. Richard Inman out of Winnipeg is one songwriter we’ve all been really excited about lately. Maybe this Canadian generation’s best hope for a true road warrior folk troubadour. Our good friend Micah Erenberg from Winnipeg is also making some fantastic music right now. Les Hotesses D’hilaire from Moncton are a frequent tour van listen for us. Those guys are crazy. We listen to Corb Lund and Fred Eaglesmith a whole bunch. We also really dig Lisa LeBlanc’s music, another crazy talented Maritimer. I don’t know. I could go on for an hour.