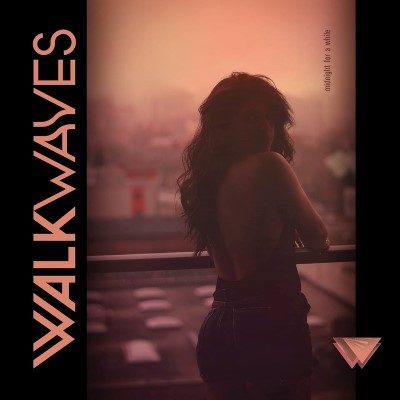 Album: Midnight For A While
Release Date: July 7, 2017
Genre: Electronic

Hailing from Toronto, Ontario, electronic based pop group Walkwaves have released their debut album, Midnight For A While.  The band, consisting of Matthew Bundas on vocals, guitars, and keys, bassist Brian Mackay, guitarist Christopher Bundas, and drummer Kevin Branagan looks to seamlessly blend electronic textures with organic instruments on their first full length record, and does so to varying degrees.

Opening on an ambient note, “Get You Out” feels like much of today’s popular synth driven indie pop until the song develops towards the chorus in which Walkwaves demonstrates in truest form their strong 80’s dance influence with a bopping groove from the bass and drums that feels partially inspired by disco along with classic Madonna.  The following track, “Skin”, on the other hand, is far more in line with today’s pop music and feels as if it would fit in perfectly with today’s top forty radio hits.  Much of the album seems to fit this description, including “T.T.T.L.”, “You Could Be Why”, and “Human Being” which features Karina Es on vocals.  All of these tracks, among others are nearly completely electronically driven, giving something you can dance to with a side of corny lyrics that depict the millennial dating scene (see “Girls On Snapchat”).

What these songs lack is the feeling that a band is present as most of the album- save a few songs or sections from the odd song- sounds like a collection of electronic effects and beats created on a laptop with Matthew Bundas’ vocals recorded over top.  While Bundas has a great voice and sounds very crisp in the clean production of Midnight For A While, the band element is certainly lacking.  This truly is unfortunate as Walkwaves shine best during the guitar led sections which feel more organic and closer resembles modern alternative pop groups of the likes of Judah and The Lion.  “Friend” Stands out as a ballad that exemplifies exactly this, as well as the chorus of “Get You Out”, along with the angst and industrial influence of the closing track, “Nightfall”.  It is in these moments that Walkwaves sound at their best and resemble a cohesive band rather than an electronic based solo project.

Midnight For A While is certainly a mixed bag of a debut record.  I applaud Walkwaves for taking the ambition of making their first ever release a full length album, but the album itself often lacks the organic-electronic synthesis which the band aimed for.  Instead, the album feels far too reliant on electronic textures that, while well written and orchestrated between different effects and soundscapes- feels hollow and unenergetic at times.  That being said, however, Walkwaves’ Midnight For A While should fit in with Toronto’s popular electronic pop scene as they play it safe with the genres stylistic boundaries for their debut.