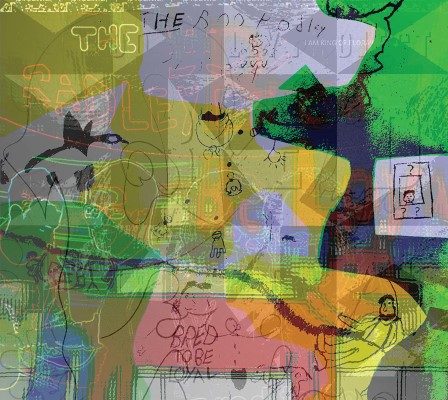 The Boo Radley Project is an eight-piece alt-funk-indie-jazz collective from Elora/Guelph/Halifax. Now, you might be thinking: “those are way too many genres for one band”, but believe it or not The Boo Radley Project manages to cover all these genres and styles in one album. Their debut record, Bred to be Loyal has obvious elements of jazz, moments of funkiness and some alternative style thrown in here and there.  The album is a definitely a unique piece – a record of many sounds.

“Funk The Trilogy” opens the record with a flourish of trumpets. It’s a sort of a smooth, jazzy tune that tends to get funkier and funkier as the song progresses. It’s a rather interesting combination of smooth instrumentals and fast, to the point vocals.  Lyrically, it’s rather fitting as the record opener as it prepares the listener for what is to come: “You gotta listen to the funk and it’ll be alright/Just listen to the funk like I told you to”. And since the song is so gripping you do what it says and continue to listen through the record.

Preceding the fourth track are “Magic Fruit” and “Dante Hall” –  both very jazzy, folky numbers. However, “What’s Going On? (Fat Kids)” is a little different. What sets it apart is its chill, easygoing vibe. It’s a classy tune that harnesses elements of smooth jazz. The raspy and emotional vocals give the song more depth and character. This track is something you’d hear at a fancy club on a summer night. Definitely my favourite track off this record.

After the groovy jazz numbers come the very ominous sounding “Buried (Spookman’s Last Ride)” and the ever so serene “Save The Whales”. Both tracks seem to act as an intermission between songs and are both just instrumental pieces of music. They completely change the tone of the album, showing off the band’s skills of dabbling in a number of genres and styles, as well as showing off their instrumental talent.

The album picks up again with its funky, jazzy sound and danceable tunes. Fast drums, punchy mandolin and blaring trumpets take over. With its ambient guitars, bubbling bass and gospel like backing vocals, the album becomes cheerful and summery again.

Bred to be Loyal ends with its title track. If you feel that this track seems to go on forever, it’s because it does. “Bred To Be Loyal” is eight and a half minutes long, the longest track on the record. It doesn’t have many lyrics, perhaps to once again show off the band’s instrumental skills. The song builds up continuously as it progresses. It’s upbeat and fast – almost like it’s helping you dance your way out. After what sounds like a massive mandolin solo, the album finishes off with a bang.

It’s easy to see that The Boo Radley Project have put in a lot of work into Bred to be Loyal. Having played a multitude of instruments on the record and producing it themselves shows a lot of dedication. The record ended up being a rather interesting mix of sounds and an abundance of styles. With a new sound only a song away, the listener is kept from getting  bored easily.