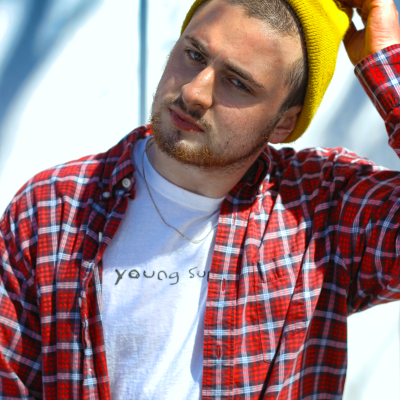 Glace Bay based artist, Mitchell Bailey released his debut album, Last Time Introducing Myself on July 20, 2017. The album features his single, “So Simple” which reached over 50,000 views on YouTube and has garnered significant airplay in Nova Scotia. We had a chance to chat with Mitchell during our newest segment of Five Questions With. Enjoy!

If you insist! My name’s Mitchell Bailey, 19 years old, from Glace Bay, Nova Scotia. I’ve been writing, recording, & performing since fifteen, but over the past year I’ve performed at festivals like SXSW in Texas, A3C in Atlanta, POP Montreal, NXNE in Toronto & opened for popular new-school hip-hop acts like Xxxtentacion & Ugly God in Miami, and just released my debut album “Last Time Introducing Myself” yesterday. I’m also the co-founder of Buds Entertainment, an entertainment company which also includes videographer MooseCanFly & in-house producer/engineer Sean Lewis. But yeah, you know, I’m just out here chasing dreams and stuff. Having fun.

Very honest. If something occurs in my life, I’ll probably end up writing about it sooner or later. It can be very reflective on previous or current experiences, relationships, etc. but also can be very forward-thinking where I’ll literally lay out my goals & describe how I’m going to achieve them (example: Finally In LA. I still haven’t been to LA, but when I go, that song’s going to feel badass). I just want my approach to always remain very human, I think that’s the best way to reach people.

Coachella. In 2019-2020. If everything goes according to plan. Aside from that, I just performed at the “Making Waves” festival in Sydney which also featured acts like Classified & Dave Sampson. We’re working on some album-release shows throughout August until I head to Montreal for POP Explosion in September. You can also catch me at Nova Scotia Music Week in Truro, but best believe we have lots more in the works for the Fall! Trying to go & do a sell-out show in East Africa. My live performances are really energetic. Lots of energy, crowd interaction, bringing random people on stage (usually turns out to be a bad idea but at least it’s entertaining) jumping, & sweating. Guess you’re going to have to come out & see! Don’t worry, you get in free of charge.

If you like catchy radio stuff, I’d say go & check out “So Simple” on YouTube, which is currently sitting around 50,000+ views. It’s been gaining an overabundance of airplay throughout the Maritimes since it’s release, so it’s definitely my most successful song to date. If you’re a huge Hip-Hop head & are only reading this to determine if I have bars or not, then I would recommend tracks like “When You Got The Power” & “Backwards Psychiatrist”. If you’re NOT the biggest Hip-Hop fan in the universe, then I would suggest “Right Here” or “Yesterday” with singer-songwriter “Weymouth”, I’ve had multiple 50-60 year olds tell me they enjoy those songs. I’m hitting every demographic market over here. I’ll be the first Hip-Hop artist to sell out a show of strictly grandparents. Just wait.

Well, Drake has always been one of the most influential artists to me, and he’s (obviously) Canadian, so I think he would have to take the title as my favourite. How cliché & uninteresting was that answer? Damn. I’m sorry. I also enjoy: Pryde (also one of my favourite artists), SonReal, Jazz Cartier, Tory Lanez, PartyNextDoor, Quake Matthews, Classified, Thrillah, Neon Dreams, Famba, and… myself. These are all rappers and acts from Nova Scotia. I need to expand my knowledge on Canadian Music. Have any recommendations for me? Okay bye!