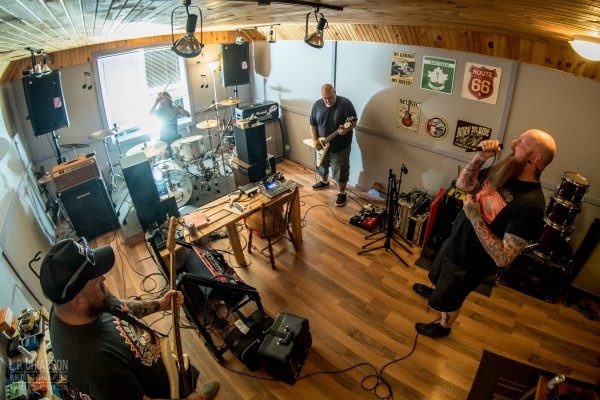 The days are winding down until Mud City Meltdown takes place in Moncton, NB. It all starts on July 25 until July 30! The festival showcases some incredible local talent, as well as some national and international acts that are certain to please the crowds. We are happy to be working alongside MCMD to showcase some of the talented bands and artists that will be performing! First up, we had The Galpines then Les Hay Babies, Marc à Paul à Jos, The Monoxides and Gold City Ashes. Today, we’re keeping things moving along and chatting with Iron Giant! Enjoy!

Mud City Meltdown is back for its third year, how does it feel to be a part of this event?

It’s great to be a part of the Meltdown and bring the Giant back to life again. We’re happy to have something, so great for music, going on in our city. Props to the organizers for making it happen. I was a part of the festival’s first year  opening for Voivod, and it was amazing.

The lineup for Mud City Meltdown is loaded with so much Canadian talent, who are you most excited to check out at the festival?

I’m pretty stoked to be playing with Gallactus and Diner Drugs(both of which contain former members of the Giant), and it’s rad that our old friends in the Dead Fucks are getting back together to make a mess, but it’ll be rad to see the Headstones again too, after all these years.

While you’re in Moncton, are there any “must see locations” that you hope to check out?

Considering we’re from Moncton….the only “must see locations” we’ll be worried about checking out will be beer tents and liquor stores.

This is the first show for the Giant in a couple years, so we haven’t done any fests together lately, but our other bands have been busy….recently PJ’s other band Which Witch is Which played the local No Funswick fest, and my touring band, ZAUM, just played the legendary Roadburn festival in the Netherlands back in April, which was absolutely surreal.

If someone has yet to see you live, how would you describe your live show?

Our live shows have always been a full on drunken chaotic assault. There’s been blood, piss, fire, nudity, and violence….but a good time, and a rowdy sing-along is almost always guaranteed. We’re super stoked to unleash the beast again, and whip up a frothing shitshow with a lotta old friends, on the 28th in the Caveau.

When you head out on tour or in this case for festival season, what 3 things must you make sure you pack?

I’m a minimalist on tour…. I travel out of a back pack, even on 6 week tours. My essentials are obviously socks, t-shirts and underwear, but otherwise my clippers for shaving my head are very important, and a phone is essential for keeping contact back home, but the main element that was always important to the Giant was a $20 bottle of Swiss Army cologne, cause if you’re gonna have a band comprised of predominantly big dudes, it was always important to us that we smelled pretty! Haha!

Here at Canadian Beats, we’re all about Canadian talent, who are some of your favourite Canadian bands/ artists?

Personally, I’ll be leaving on a tour to the west coast days after this show, but as for the future of the Giant… only time will tell if the beast will rise again…..