’77 Montreal Schedule Is Out! 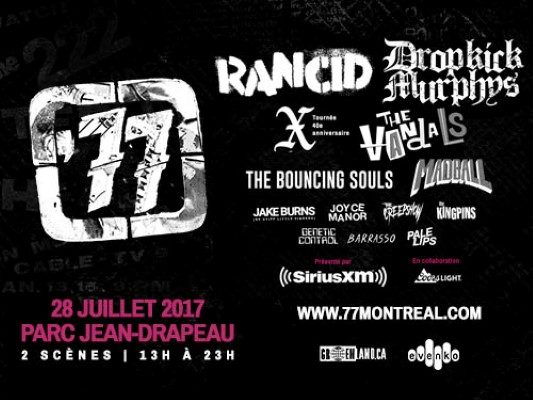 ’77 Montreal has announced the schedule for this year for its event this Friday on 28th July at Parc-Jean Drapeau .

’77 Montreal  is more than just a one day festival. The brand new festival will celebrate the punk rock music and culture of the past 40 years. In addition to this it gives punk rock fans of all ages a unique experience through the Marché aux Punx, an online archive of punk history, movies, a Kids Zone, a fun selection of food trucks and the ’77 Brasserie.

The festival showcases headlining acts like as Rancid and the  Dropkick Murphys. X (who are making their first Montreal appearance since 1983 on their 40th Anniversary Tour!) will also be joining the lineup as well as The Bouncing Souls, Madball, Jake Burns (of Stiff Little Fingers), The Kingpins, Joyce Manor, The Creepshow,  Barraso and Montreal’s very own, Genetic Control and Pale Lips. So try not to miss the first edition of ’77 Montreal in all its punk rock glory and get yourself over at Parc-Jean Drapeau on July 28th, Friday!