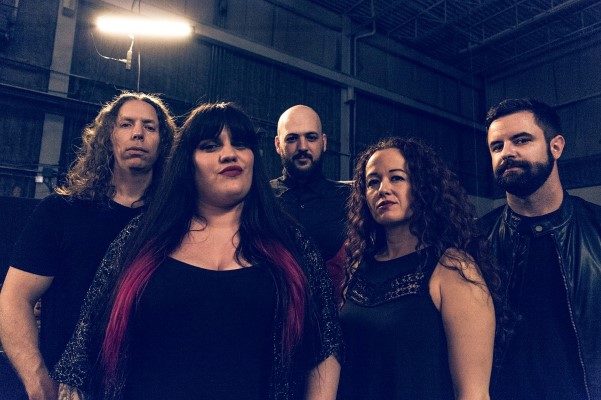 London, ON based Hiroshima Hearts  have released a new video for their single “Spend Your Money”. The video was directed by Nik Pilecki of Hungry Boy Productions and inspired by the films of Quentin Tarantino. The video follows lead singer Jenn Marino and her gang of gold diggers as they seduce a handsome stranger, steal his money, and go on one crazy spending spree throughout the city. As with the bands’ previous video for “Four Steps Down”, this video also features a cameo by Morgan Lander of Kittie as the Devil (who loves cupcakes).

“Spend Your Money” is the second single from the band’s latest EP entitled Bone Music.

Lead singer, Jenn Marino had a bit to say about the video:

“When thinking about this video we thought, ‘If someone handed us a bunch of money, how would we spend it?’ Automatically we started thinking of some amazing London businesses that we would be running to. But how were we going to get the money? I love cult classic films with strong, bad ass female leads, so we thought, ‘Why not seduce a guy and take his money to spend all over the city?’

The video was just so much fun to make! We had a blast with the cupcake mostly made of icing from The Boombox Bakeshop, the amazing backdrop and fun toys (I wish I owned) from Heroes Comics, the hidden gems at Speed City Records, some of my favorite bad taxidermy friends from True Love Tattoo (I do not miss dusting Garth the owl with his crazy eyes!), and the many awesome finds at Back to the Fuchsia! These are businesses that we shop at regularly and people in our community who believe in supporting local from businesses to music! A huge huge thank you goes to them.”