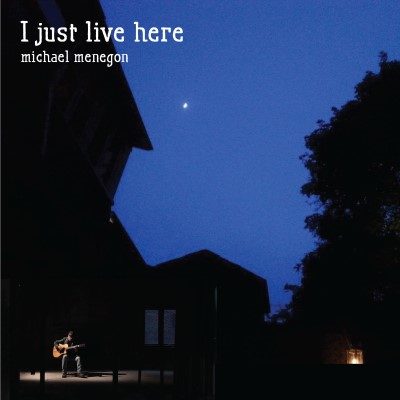 I want such good things from Michael Menegon and his debut EP I Just Live Here. The single “You’re My Religion” is a lovely song full of simple affection and longing that Menegon wrote for his wife. It’s a direct relative to City and Colour and it whet my palette for more. It was disheartening then to realize the rest of the album didn’t have the same vitality.

The Toronto based musician is a well-know and long-time dancer, choreographer, and festival artistic director – the man knows his music. And he’s a talented musician. With a bit of focus he could really take off. Given his eccentric stylings I wonder how he would do under the tutelage of Hawksley Workman – they seem cut from the same cloth.

The album is a bit of a mishmash of sound without a sense of cohesiveness. Full of potential but without direction, it was disappointing that it came from someone who obviously has talent. On the other hand, I’ve mentioned a few times in my reviews how much I respect when risks are taken with an artist’s music and Menegon does do that, so props to him. Too many musicians play it safe and you never truly explore your sound or your limits when you do that.

Overall, it’s not a bad album. It’s quirky and interesting, and at times even zippy. Menegon states that “‘I Just Live Here’ is about popular issues, what I know and where I live. A representation of the times. My hope for the album release show is to take the music and songs to the next level with the live performance, which I endeavor to present not as an exact reproduction of the recording, but a live interpretation.” If he’s able to focus his soundscape a little more he could do great things.

I Just Live Here was released on July 7 and is now on rotation on CBC and CIUT radio.