Inside The Music – Interview with Zane van Hoek of Snap Hoek 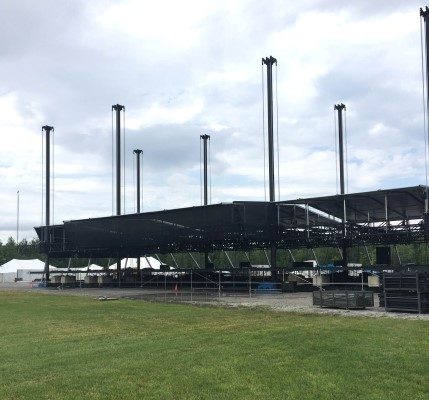 Snap Hoek, co-owned and operated by Zane van Hoek, is a production management and event staffing company that has serviced both WayHome and Boots & Hearts for numerous years.  Van Hoek and his team are not only responsible for stagehand recruitment and management at the festivals but also for tasks such as transportation, accommodation and safety management. A driving force in the entertainment production industry, Snap Hoek offers some of the most sought-after services in the GTA. From stage-building to lighting design, Snap Hoek’s crew have always had their festival partners covered.

Van Hoek began his career in the entertainment industry 22 years ago as a Film PA and Theatrical Lighting Technician and has been a co-owner/operator ofSnap Hoek since 2004. Currently, he services several southern Ontario organizations as a Producer, Production Manager and Crew Chief.

Can you explain to us what you do while onsite at the festivals? What do your responsibilities include?

As the Crew Chief for a major Festival, I start my day checking in the staff, discussing the safety protocols and assigning the Day’s projects. From there as the day progresses I manage and re-assign staff to areas that may have fallen behind, or starting on projects that may have been slated for the following day. During the show weekends I am dealing with the touring crews and their requirements on a day by day basis. Usually it is close to 24 hrs a day for the weekends themselves

Approximately how many people do you have on your team each year? What particular project would you say that you need to dedicate the most stagehands to?

For the bigger build days we are running nearly 90-100 people per day. During the festival runs, we have a standing day crew of 60 and 30 working overnights. Our biggest project tasks are the actual stage builds, roof structures and lighting requiring the most staffing numbers.

How did you get involved with Boots & Hearts and WayHome (i.e. Republic Live)?

I was reached out to prior to the start of the second season with Boots and Hearts at Canadian Tire Motorsport Park. After 3 years there we moved to Burl’s Creek and the start of Wayhome.

What is your favourite part about working on the festivals? Why?

That first roar of the Crowd when the Headliner takes the stage. It gives me goose bumps and is an instant gratification of a job well done.

What is the most difficult part of your job? Why?

Weather. A storm is a festival’s worst nightmare

What is your favourite memory from your years working onsite at the festivals?

Just the camaraderie among the great group of people that we have been lucky enough to have as part of the Republic Live team.

Other than Boots & Hearts and WayHome, what kinds of companies have you serviced? What kinds of events?

Other events I work on annually are, iheartradio MMVAs, The Juno Awards, The Canadian Screen Awards.

How long do you usually work on the festivals for? From start to finish, how much time do you invest to make these events happen?

We normally start some preliminary meetings at the end of April. We have most of the planning locked in place by June and start booking staff. We are physically on-site 10 days prior to Wayhome and we be there until roughly 4-5 days after the end of Boots & Hearts. With Feastival added to roster this year after Boots and Hearts, I would say I’ll be on-site for a little over a month.

Do you have any advice for people who are looking to get into the industry?

You want to do this?! Are you Crazy?! If you answered yes to both questions, feel free to get in touch with us at Snap Hoek and we can get the ball rolling for you.