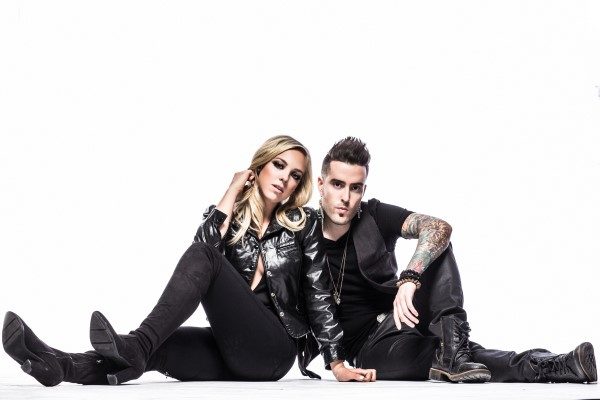 Powerhouse duo Tiger & Bloom—a union between previously-independent artists Tiger Rose and Rikki Bloom—blows all competition out of the water with the title track of their debut EP, Hearts On Fire. With a classic Bonnie and Clyde motif, ear-worm verses, and a hopelessly catchy beat that would be at home in any summer blockbuster, Tiger & Bloom check all boxes—both aesthetically and musically.

So first of all, I wanted to say congratulations on the release of “Hearts On Fire”. For those at home who don’t know, the two of you produced it alongside big names like Kevin Dietz (James Vincent Morrow, The Strumbellas) and Mark Needham (Imagine Dragons, The Killers, Fleetwood Mac), who mixed the track in L.A. What was it like working alongside those well-known names?

First of all, it’s always a pleasure working with such close friends who have been there since the beginning. Truly loving the people you’re working and the process of writing music is what really energizes and keeps us moving forward. Kevin Dietz has been a close personal friend of ours and collaborator for many years and has played an influential role in the development of Tiger & Bloom.

It’s safe to say it never feels like work when you’re working with your best friends, who you trust, who inspire, and know how to pull the best out of you as an artist.

Mark Needham was someone we had on our radar due to his track record and decades of mixing top charting pop hits. We’re all fans of his mixes and the bands he has worked with, and knew his ear and experience would lend themselves naturally to our music. He’s a fantastic guy to work with, and was not overly precious which was surprisingly refreshing for someone with his experience and amount of hit records under his belt. He was always striving to make sure our creative vision came to life.

How would you say the recording process was like, especially in comparison to recording as a solo artist? What hurdles were there? What accomplishments?

Recording two vocals can be very challenging…especially when they’re two lead vocals. That was very new for both of us. The recording process demands a lot of attention to detail; how our voices work together, who sings what and knowing how to compliment each other’s voice. Figuring out proper keys and arrangements takes time and precision. We both have very different vocal styles and delivery, and so making them blend always needs to be top of mind for us. Tiger comes from a hard rock background, and as such, has a loud singing voice (…and personality). I (Bloom) come from a jazz/soul background; my singing style/approach is much more soulful and seductive. The contrast between the two is strong. However it works well, and that contrast is what gives us our unique sound.

Creatively, two minds is always better than one. We’ve gelled so much together as artists and friends, and because of that we trust each other – there’s no personal egos clouding ideas or agendas. We personally just love creating together, and its so much easier trying to make it in this business with a rock you can always count on. We’re each other’s rocks.

On a similar note, because the two of you were very divergent artists before uniting musically, how did that unification happen? How did you two meet, and what sparked the idea of becoming a duo?

We had known of each other for a few years prior and had a lot of common friends in the music business. Tiger had just left his previous band and was in Los Angeles focusing on his own writing with producer Brian Howes (Daughtrey, Hedley, MotherMother). He reached out suggesting we jump on a writing session when he returned, to which I agreed. We got into a room, started writing, and there was no expectations – just an eagerness to explore the possibility of creating and writing something fresh. We weren’t caught up in what the song should sound like or what it needed to be – we were just inspired by each other to write.

After a couple sessions Tiger shared his vision of creating a new-age pop duo version of Fleetwood Mac. Inspired by the creative chemistry in our writing sessions, I was really interested and compelled by the idea – even though it was something very unknown. We continued to write, challenge each other, explore new ideas and sounds, dissect pop songs that inspired us (both new and old), and very quickly through that process we organically discovered our unique style and sound.

With Tiger & Bloom, it always comes back to that magical inspiration we find from each other when writing – we aren’t precious of our own ideas, but rather want to be vulnerable and learn from one another. That chemistry is very rare to find when writing with other artists, and it’s something we never take for granted.

Do either of you have any funny first impressions of the other from when you first met? Or, alternately, what surprised you about the other person once the two of you started working together?

Bloom – I remember walking into our first initial session, knocking on the door, and being welcomed by Tiger, sporting a full Mohawk, tattoos to his wrists and his ankles, and wearing more jewelry than me and my two sisters combined.

Tiger – I remember Bloom walking into the session and already being impressed by her open-mindedness to take me up on my invite, and get together in a writing session. You could tell we were both very hungry to be rejuvenated by music again, and were both in search of something new, something fresh. We were both willing to let go of our preconceived visions of who we thought we were, who we thought we needed to be and were both open to discovering a reinvention of ourselves.

The two of you also have a very dynamic look, as evidenced in your phenomenally popular Instagram page. Was that a look you cultivated together, or did you maintain your original styles from before?

I (Tiger) have always been a bit flashy and flamboyant in my style. The hair, the feather earnings, the fur, jewelry, scarfs etc – I’ve always been a bit loud and over the top, think it stems from my 80’s rock star heroes on the posters I had on my wall as a kid.

For me (Bloom), what I wear has always been a natural extension of myself. I’m very much a dreamer, and have always connected with the bohemiam style of Stevie Nicks. One side of me is calm and collected, and the other is edgy and adventurous. I think all these characteristics come out in the outfits I choose to wear; the airy, light kimonos I dance around in, the mixture of leather and lace, the gypsy like jewelry. Tiger&Bloom allows us to both be our true selves, without limitations. We understand and support each other fully…every day can be a costume dance party of we want it to be.

Now, “Hearts On Fire” is very much a classic summer anthem: there’s the overarching us-against-the-world theme, and in turn the gritty appeal of that, particularly to your younger audience. Can you walk us through the songwriting journey for this track? What compelled you to write this?

Like most of our songs, Hearts on Fire was originally inspired by an ex. Not to sound cheesy or cliché, but these experiences for us both draw a lot of real emotion that need to come out, and also naturally lend themselves to good, relatable songs. Music is the natural outlet for us to express ourselves. As we began writing the song, we felt even more compelled by the story and inspiration, as we believe it’s something so many can relate to; loving something or someone with all your heart, but knowing it’s wrong, and knowing that you need to let go for good. Love is beautiful, it’s painful, it can be a fiery mess. Hearts On Fire encompasses all of these emotions, and we know that someone, somewhere, will hear this song and be able to relate to it in their own way.

How did the song change from its conception to its finished project, if at all?

The amazing and inspiring thing about songwriting is how a song can begin one way, and transform into something the complete opposite. When we first began writing Hearts On Fire, it started as a very slow, powerful ballad. We were excited about it, but knew that it wasn’t at the level that it needed to be. We were fighting with it and ripping it apart for a few months. After a trip to LA allowed us to take a step back from the song, we were able to come back to it with new ears. Feeling refreshed and ready for a new direction, we jumped in the studio. All of a sudden, the song really just took on a life of its own. Hearts On Fire was a song that, once we tapped into it, knew exactly where it needed to go; ideas started flowing, sounds starting glistening, and the entire song came alive with full colour and emotion. We learned a lot from the process; not ‘settling’ on a song but rather fighting for it until it is where it deserves to be, stepping outside of our comfort zone, being vulnerable to a song and not being afraid to try new things.

What is something you want your audience to take away from this song?

Hearts On Fire is a song we believe everyone can relate to, and as such, we want our audience to listen and find comfort in it, get lost in it, confide in it. Love can be a scary thing when you give with all your heart still knowing that it won’t work. But at the same time that’s the beautiful thing. We all have that someone or that something that we want to hold on to, but need to let go of. It’s comforting to know that we all go through this inner battle between our head and heart. Life is about loving and learning; it hurts, but it is real, and we hope whoever listens is inspired by the emotion the song can pull within.

With “Hearts On Fire” recently released, can you tell us what performances you have lined up for 2017?

Finally, thank you both so much for your time. Any parting words for your audience?

Thanks for giving Hearts On Fire a listen! We’ve got some amazing things lined up and are so eager to share our creations with you. This is only just the beginning.