Home / Festivals & Events / Night #3 of the Phillips Backyard Weekender—the good, the bad, and the drunk

Night #3 of the Phillips Backyard Weekender—the good, the bad, and the drunk 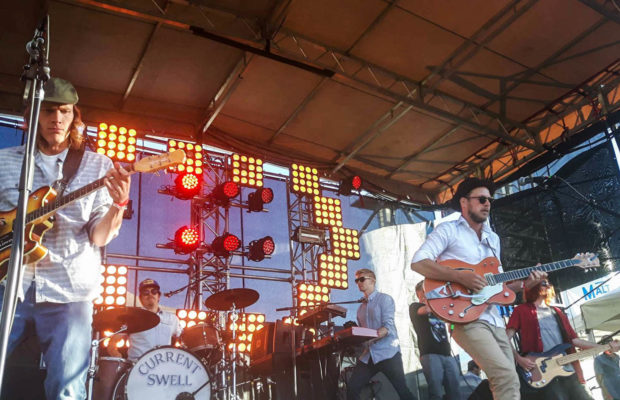 An elephant decked out in head-toe-balloons. A sea of beach balls. Men sharing joints with random strangers in the audience, because outside food and alcohol is banned but apparently marijuana isn’t. Was the final day of the Phillips Backyard Weekender the best yet? Absolutely.

But, of course, it started off in its usual way.

“I heard that media needs to have bought tickets to come in this year,” said the volunteer manager, using her body as a roadblock as though I would physically bowl past her.

I exchanged a glance with the two photographers behind me, a momentary telepathic flash of weariness linking the three of us together. “Who did you ‘hear’ this from?” I asked, not bothering to hide my impatience. “It’s the last day of the Weekender and no one has mentioned this until now. Not even the various emails that were sent out from Atomique mentioned this—and I have email on my phone. I’ll bring them up now.”

One scowl, huff, and whispered chat with an unknown higher-up later, she came back and wordlessly ushered us inside. But did that sour tone last all throughout the last day of the Weekender? Of course not. I’m a woman of simple taste. If there’s a mini-donut vendor five paces away, then nothing in the world can truly be that bad.

Temperate today—a final, too-little-too-late balance between the first day’s autumn chill and yesterday’s heatstroke-worthy rise in temperature—music-goers made an extra effort in homage to the Weekender reaching its close. Still only picking up in the very late afternoon audience-wise, it was a decidedly bizarre choice to have the pricey Weekender be on the heels of the free-of-charge, star-studded Canada 150, which featured mega-hits such as the Arkells and Tegan & Sara. But again, Victoria music fans are the most dedicated, and they’ll take what they’re offered.

Crowd sizes tripled. Fashion was dialed up to a truly festival-worthy degree. Lines for food and drink vendors wound throughout the entirety of the ANIAN Yard. The mood was infectious—this last day was clearly the most anticipated, and fans let it show from the first act to the last.

Hot on the heels of their new album, released June 6th, Distant Grand set the tone for the day with their self-dubbed “sexy, sad” spin on electric/soul music. With distinctly wistful vocals, token slow, sensual downbeats, and a thick disco vibe layered on top of it all, duo Jesse Brown and Manji Benning played to the largest starting audience thus far—and they loved it.

Know what else people loved? The DJ actually being allowed to have proper, set-worthy volume.

Playing a mix of old and new classics, ranging from Kaleo to Ice Cube, DJ Mike D surfed on a wave of zeal from start to finish. The change in the audience was palpable: unlike the previous two days, dancing was constant, and overall attitude was improved upon. People mingled instead of seeking shade and hunching over their phones. The only question was, why hadn’t the volume been cranked like this before? It was a decidedly bizarre choice to change it just for the final day, but thank God they did—it saved the atmosphere, tweaking the vibe up the few notches it needed to truly and finally feel like a festival.

With their slogan, “Not your grandpa’s British brass band,” The Brass amped the liveliness up even higher. A non-auditioned, community brass and woodwind ensemble, The Brass are like acapella with instruments. Featuring original arrangements of songs by David Bowie, Tame Impala, The Weeknd, and Daft Punk, this unique group kept spirits high with their jaunty covers and down-to-earth stage presence, and redefined what would come to mind when people said “an all-brass band”.

Having shared stages with Mumford & Sons, Awol Nation, and Bedouin Soundclash, it’s no wonder why Canadian singer-songwriter Vince Vaccaro brought the house down. With his sultry, from-the-heart tracks like “Bring The River Back” and “Waiting Here”, his stunning vocal range and folk-indie mix clearly struck a note with the infatuated audience.

Much-beloved American songwriter Allen Stone was, unsurprisingly, a huge hit. Building hype for Current Swell—the headliner that, according to the conversations swirling around me, were largely the reason people bought tickets for the weekend—Allen Stone kept the ball rolling with his soaring guitar riffs and head-banging easy-listening, his stage presence candid and unpretentious. Integrating soul, pop, and R&B, and folk into his own personal brand of music, he was the perfect set-up to the weekend’s most anticipated headliner.

Beachy. Local. Incredibly talented.—all descriptors of fan-favourite Current Swell, a roots-rock band from the west coast. With music centering out personal struggles and the hardships of reaching the “Canadian dream”, Current Swell have clearly stolen the hearts of the entirety of Victoria, their folksy twang and easygoing cadences tapping into the heart and soul of what it means to be a Vancouver Islander.

Kicking off the set, The Zone host Jon Williams flung a volunteer decked out in head-to-toe balloons in the shape of an elephant into the crowd for some spontaneous crowd-surfing, with security guards having to laughingly help the guy down after the crowd realized that they had no idea where to put him. It was a light-hearted, much-anticipated good time, and clearly checked off all of the audience’s boxes.

Despite its many faults, local talent ultimately saved the 2017 edition of the Phillips Backyard Weekender. Poor organization, steep prices, and hot-and-cold enforcement of rules dulled in comparison to the amount of enthusiasm fans poured into the experience, and rightfully so—the acts were wonderful, and were given the admiration they deserved.