Home / Festivals & Events / Night #1 of the Phillips Backyard Weekender—the good, the bad, and the drunk

Night #1 of the Phillips Backyard Weekender—the good, the bad, and the drunk 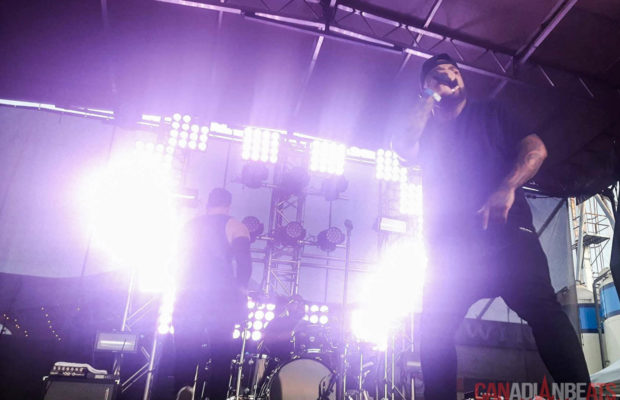 Victoria, BC, always makes good on those wanting a sloshing-your-beer-on-strangers good time, and the Phillips Backyard Weekender is no exception. Running from July 7th-9th, the ANIAN Yard—an outdoor, brick-encrusted venue in the heart of downtown—hosts a variety of artists from the early afternoon to late evening, boasting its many food vendors and myriad of featured genres.

Run by Atomique Productions—the same team that organizes Rifflandia, Victoria’s other summer-favourite—music-goers should expect to have a similar experience to that of any previous involvements with Rifflandia. For those unaware, that means chaos. Enjoyable, Canadian-ly apologetic chaos, but chaos nonetheless.

Arriving an hour before gates opened to the public, the unmistakable drumbeats of soundcheck could be heard from four blocks away. Despite the sky being Victoria’s typical cloudless blue, an autumn wind had picked up with fervor: I was greeted with the sight of orange-clad volunteers struggling to weigh the tent overarching the entry lines to the ground. “No one’s briefed me on where the accreditation tents are,” were the first words out of the frazzled security guard manning the front entrance, one hand twitching upwards to scratch sheepishly at a tuft of his gray hair. “If you’re looking for those, try going to the volunteer tent and poke around until you find someone who knows something.”

I slipped between the makeshift entryway and waded through the mix of volunteers, security guards, and black-donning Atomique staff. Despite the stress etched into every single person’s face, the venue didn’t falter: food trucks were lined cleanly up against the mural in their standard place, and in spite of the wind threatening to blow all the stands away the tents and temporary exits had been secured. “Has that security guard been letting everyone in through that entrance?” asked the woman holding down the fort at the volunteer tent. I nodded. “Jesus,” she said. “Hang on. I’ll go talk to him.”

Ten confused minutes later, with a media wristband finally gleaming purple around my wrist, I headed down the concrete slope that blossomed into the main segment of the Weekender’s venue. A disco ball hung from the ceiling of the stage, offset by the pyramid of lights stationed upright behind the instruments: it overlooked a swath of space reserved for audience members, first aid and merchandise tents tucked into the far left corner. When The Velveteins took the stage at a quarter past four, only a handful of media dotted that enormous space. Most would be discouraged, but The Velveteins? Well, they were the opposite.

An indie-rock band from Edmonton, The Velveteins are what would happen if you mixed Wolf Alice and The Japanese House together, with a splash of their own jauntiness for good measure. Tall, leggy, and distinctly youthful, guitarist Spencer Morphy slid his black sunglasses into place before addressing the crowd. “How are you guys doing today?” guitarist Spencer Morphy asked all seven of us. In response to the weak cheers, he took another gratuitous sip of the beer he had in hand. “Hey,” he said in response to one photographer’s light-hearted jab concerning it, “it’s five o’clock somewhere, right?”

In spite of their unfavourable time slot, The Velveteins were phenomenal not only in their sound, but in the energy they brought to the stage. Starting off their set with carefree tunes that could force even the most hardened indie-haters to bob their head in time, their tracks swooned into summery crooners, their consistent catchiness and the pristineness of Morphy’s lead vocals leading to a truly transformative act that deserved a much better time slot than it received.

Now, DJ Tim Horner’s role was to fill the space during act changeovers with fun, atmosphere-carrying remixes, but unfortunately the Weekender did not make the poor DJ’s job any easier for him. With a forty minute changeover between The Velveteins and the second act—with that time dwindling only slightly as the day went on—Horner did a stellar job of keeping the mood high amongst confused murmurs from the audience. Pop-centric, upbeat, and focusing on a new take on old favourites, Horner’s tracks were the kind of uncomplicated easy-listening that was sorely needed to smooth any ruffled feathers that emerged from such long wait times.

A fanfare of drums, trumpets, and guitars, the truly unique eight-piece Polyrhythmics are on a mission to redefine “funk”. With vocals taking a complete backseat—as in, none whatsoever—I was pleasantly surprised to see that, when the audience did begin filing in, they were already stamping their feet along to the rhythm. True musicians to the core, the Polyrhythmics combined professionalism (their quirked eyebrows and deepened frown lines from the messiness of the changeover vanishing as soon as they picked up their instruments) and unadulterated passion to be playing there into one unmistakably admirable performance. The result? An act that I have no doubt changed the view of lyrics being an irreplaceable part of a song.

Rap act Oddisee lifted his hands in greeting to an audience that was going wild just at the sound of his name. Eliciting the biggest roar of the crowd that day—even competing with the reaction to Common Kings, the day’s headliner—the American rapper and producer took audience involvement to the next level, and people loved it. With the mic tipped towards the crowd for at least half his set, Oddisee played on the excitement of his fans, his seamless verses never once tripping over themselves while at the same time remaining straightforward enough that the crowd could fill in the lines for him on the fly.

The atmosphere was the epitome of a good summer festival: a sudden and unexplained beach ball was being flung amongst the crowd, women were sloshing their beer on strangers’ shows and having too much fun to care, and at least three grown men were shrieking like twelve year old girls at a Shawn Mendes concert. All in all, Oddisee nailed it, and bowed out to the largest collective cheer that was heard that day.

With a hit as big as “This Is Why I’m Hot”, one would think that reggae artist Junior Reid’s act would have been a showstopper—but the unluckiness of a poor time slot dampened his impact. The wind seemed to snuff out the heat of the sun, and at the same time the alcohol vendors, despite the consistent signs saying that there would be zero tolerance for intoxication, looked to be taking its toll on festival-goers.

With a distinct emphasis on atmosphere, verses that seemed almost tropical in the lackadaisical way the words fell into one another, and constant pauses in his set to speak to the audience about unity and what it meant to him to be there, the late-day sleepiness seemed to kick in: the crowd swayed as one, faces lost in their beer cups. Only a few cheers were elicited. It was clear that Reid’s act was enjoyed by all, but the energy just wasn’t reciprocated by the crowd—and maybe, judging from the reaction that came next, they were resting themselves up for the final and most-anticipated act.

Hard-hitting rhythms. A high point of emotional fever. Summertime vibes. A modern spin on the classic-ness of rock n’ roll—all descriptors pertaining to Common Kings, the headliners of July 7th at the Phillips Backyard Weekender.

Originating from California, lead singer Sasualei “Jr. King” Maliga has been hailed as one of the most powerful untrained vocalists in the world. With a stage presence that demands attention, a pop touch to their heavy beats, and a vocal range that is capable of striking any music-goer starstruck, it’s no wonder that Victoria went positively wild for Common Kings and their firm grasp on multiple genres.

Talent-heavy and genre-rich, the giftedness of the acts absolutely outweighed the negatives of the grueling changeover times and staff ineffectiveness, but that doesn’t mean we can’t poke fun at it. All in all, the first day of the Weekender can be summed up by the first and last words the security guard manning the backstage spoke to me. “I don’t know why we’ve been letting you come in and out of here for six hours,” he said, “but apparently we aren’t supposed to.”