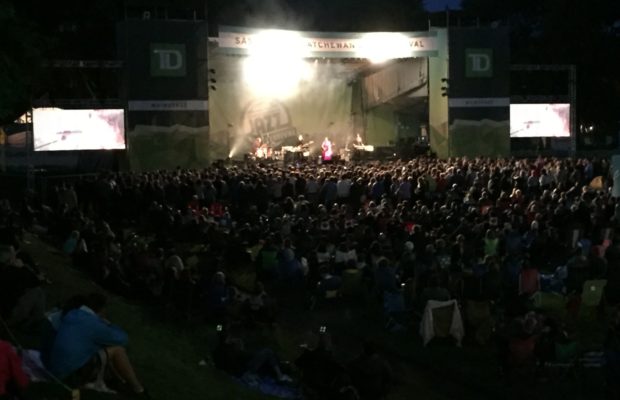 During the Sasktel Jazz Fest, a lot of talk revolves around the stage performances, whether on the TD Main Stage Bessbourough Gardens, the Potashcorp Club Free Stage in the park, the heritage Broadway Theatre, or at venues such as the iconic jazz club the Bassment, the legendary alternative room Amigos, or downtown music hub the Capitol.

Besides the organized stages around Jazz Fest Saskatoon, there are buskers who independently set up on downtown corners to share their music with the traversing Jazz Fest crowd.

Making my way to the downtown stages, I had the chance to hear stories with buskers playing during the SaskTel Jazz Fest this year.

One was Earl Bull whose band, Long Time Running, plays around town locally.  Earl, as lead guitarist, with an impressive singing voice, holds himself up on crutches while entertaining walking audiences who stop to listen to powerfully played covers of C.C.R. and R.H.C.P.  (Yes, I picked songs from bands with abbreviations he played on purpose.  Creates good parallelism, and makes readers remember what bands are being referenced.)
Or Tim Gerber, a saxophone player from Regina playing around Saskatchewan at every occasion, who had the opportunity, during this year’s Jazz Fest, to have an impromptu afternoon a cappella jam with a local rapper and mainstage act Talib Kweli outside the  Bessborough  hotel sharing beat box rhythms and free verse battle rhymes.  That’s right, Talib Kweli jamming with a local busker.  Stop next time there is a busker as you never know who may be jamming with them.

Friday Night Feist (as I am now officially dubbing it) at the Sasktel Jazz Fest began with opener Calgary’s Reuben and the Dark, not to be confused with the Frank Zappa album Reuben and the Jets.    Using ambient sprawling intensity, sparkling vocal harmonies, and amazing use of silence and space with wonderful pacing, Reuben and the Dark’s songs are constantly moving and changing, melding and morphing in watercolour sonic tapestries.
Their songs move from low-in-the-water-Devil’s-tide winding roads to driving folk songs with single note guitar lines and ambient chords.   Reuben and the Dark retains their sound form from song to song being able to push tempos and delivery while keeping their overall aesthetic intact.

And this is only after the first two songs.

Their arrangements are vast and, at times, dramatically quiet, involved yet never busy or rushed, every part has its place, using space to create subtle rests allowing the audience to appreciate the technicalities of their music by stripping it down, or stopping it altogether, then re-creating it from the bottom up.

Sonically, imagine if Coldplay decided to not play the Super Bowl and create mood music for an outdoor folk festival. And this is only into song three.

In-between songs, an enthusiastic fan gives an encouraging, overly loud, independent cheer.  Sincerely reacting to the loud cheer from the back corner of the park, lead singer and songwriter Reuben Bullock says with as much deadpan sincerity as one can muster, “We need a hype girl.”  Imagine Flavour Fav as a hype-girl but dressed all in steam punk attire and barely speaking, this would be the “hype girl” Reuben and the Dark would employ.

Even the moodiest of music can have the hottest of singers.

To continue with the ambient jazz rock night, Reuben and the Dark musically, and respectfully, leave the stage preparing the crowd for tonight’s headliner Feist (see the headline of this article for the full effect and clever word play if one did not catch it the first time).

Rather modestly, Feist starts her set with a closely placed mic performance and slow rock, heavy-alt. tune with guitar synth violin and a steady bass drum, like a heartbeat, opening into a driving Karen O delivered vocal line for fuzzed guitar with handclaps.

Feist vocals are impeccably delivered and masterfully structured.  From the onset, Feist fans are immediately treated to expertly played, moody melodies with sincere grace and a dash of joy.

The evening sky keeps its cloud cover setting the mood for an ambient, alluring, engaging night.

Feist’s songs strengths are her arrangements with dramatic lead vocals and guitar with the band interjecting and accompanying, tastefully creating a perfectly structured accompaniment.

The audience is rapt in awe, silently listening and respectfully enjoying, not using space for their voices allowing Feist’s sounds to wash over them like the Holy Ghost in fiery flicks of flame.

Feist’s song “Any Party” is a big, politely brash love song with a sweet, elegant bridge.   The world needs more tough love songs and, hearing it live, adds to the tune’s emotional power and delivery.  During the non-obligatory sing-along section, Feist interjects with non-expected stage banter and endearing comments.  A microcosm of her set in one sweet, yet tough, yet enduring, tune.

Feist brings out the polite music crowds attentively standing or quietly listening.  Even when the audience claps along it is polite sounding and in time.  Feist crowds had great elementary school music teachers.
Feist performs with angst of a riot grrrl with a poet’s soul, a fantastic songwriter and performer not afraid to challenge herself while melding styles and genres, like the Rheostatics’ tougher younger sibling using great live narrative to create a dynamic texture to her already poignant songs.

To add to the ambience, Fest ends with a song she calls a “slow dance,” a melancholy romantic tune using a vibraphone sound, quite drums, a low volume keyboard with soaring vocals melding into an intense, soft spoken rock jam.   Alt. rock in elegant heels constructed with comfortable insoles.

The last set song of the night has a lone spotlight focused on Feist as her voice delicately decays ending a superb, sophisticated set.

For the encore, after polite yet endearing applause, Feist plays a solo guitar and sings, a perspective addendum for an ambient night. As part of the encore Feist plays a stirring, intimate slow tempo version of her huge pop hit “1,2,3,4” telling the story, of a story told to her, about a loved one’s ten year travels across Europe with a back pack and Euro-Rail pass.  Sweet and endearing, joyful and personal, it was touching closer for Friday Night Feist.

As a coda to this experience, it is the first time I have ever seen a music fan “shush” someone during the encore of an outside concert.

For Feist fans, it is all about the experience, and all about the music.  A terrific transition night between Thursday night’s high, positive energy vibe and Saturday’s old-school hip hop show.

Friday Night Feist was an amazing, ambient night, a wonderful cool, dark night for the remaining week to come.