Trackside Music Festival, by festival standards, is still very much in it’s infancy. Back for it’s second year at the Western Fairgrounds in London Ontario, this country fest helped thousands of proud Canadians celebrate Canada’s 150th Birthday. With an abundance of performances, delicious food vendors and of course plenty of adult beverages, the day was set to celebrate in the best way we know how – music.

From a festival standard, it was pretty organized seeing as it was only the second year running. Wristband pick-up was organized and smooth, the ID check while standing in line was genius, and the quick action when a lovely (but unwanted) thunder storm struck us were great. That being said, I don’t think they anticipated the number of people they had this year compared to last. It seemed like security had their hands full and there’s no garbage cans (that I could see anyways) by the stage – which in the end, made fore a very messy cleanup at the end of the night.

As mentioned before, we were delayed by a little rain (okay – it was a lot, I can’t lie…I got DRENCHED). While that may have deterred the performances a little, it didn’t stop the festival goers or the musicians from having a great time and even making fun of the crazy weather. Once the nasty rain passed and the sun came out, everything was back on track – albeit a few shorter set times.

Before all the weather snafus, Aaron Pritchett kicked off the mainstage events just before two in the afternoon. He’s been around for many years, but has just recently made a comeback with new singles and multiple show dates across the country. Sticking with songs we all know, he pumped up the crowd with favourites like “Hold My Beer”, and “Dirt Road In ‘Em”. He was definitely a great way to kick off the day. 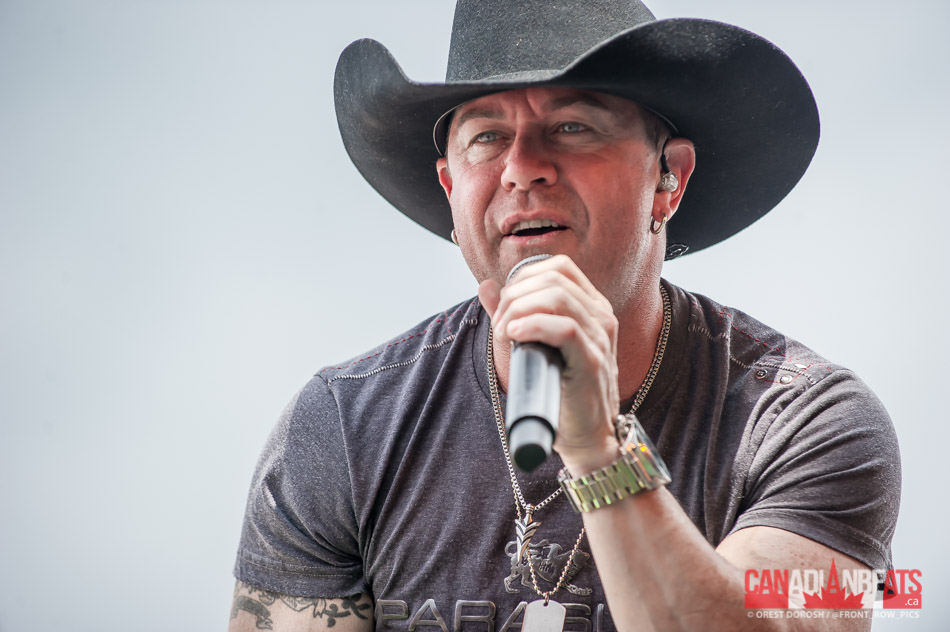 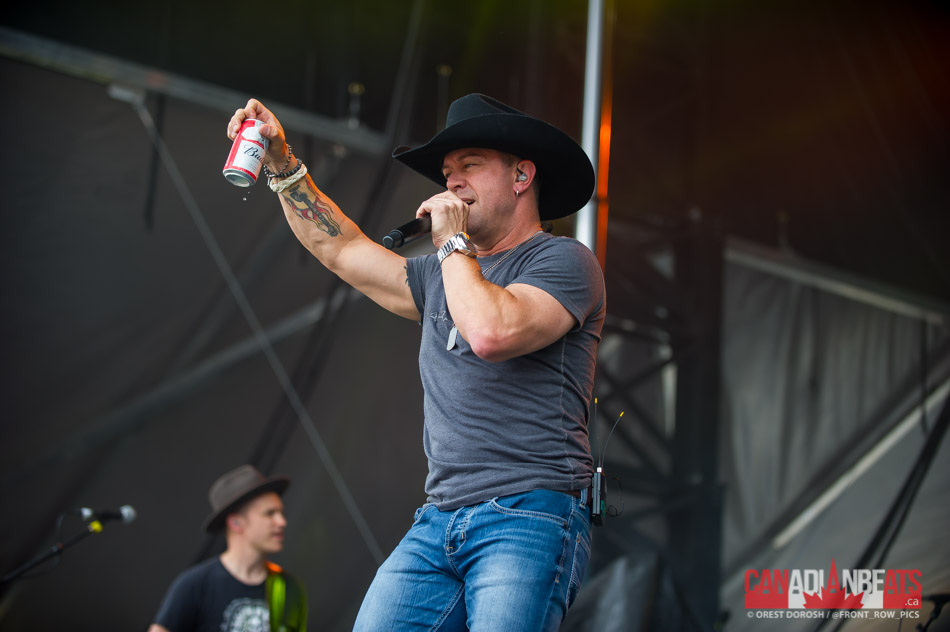 This young rising star is still fairly unheard of so when she hit the stage I wasn’t sure what to expect. Her only recently released song being “Take it On Home”, she sang a multitude of well-known cover songs. Even though I didn’t know all that much about her, I do know she has a great voice and a crazy amount of potential. She’s a great artist with solid vocals and stage presence. This London Ontario native was a perfect addition to Trackside’s lineup.

Lindsay Ell first came onto my radar while performing on the mainstage at Boots and Hearts in 2016. She had a vibe that was like no other female country artist I’d ever seen. Her rock style music suited her voice and her personality then and it continues to do so now. Straight up this girl is a badass. She knows how to own the stage and can kill any guitar solo thrown her way. Singing favourites like “By the Way” and “Waiting on You”, she mixed it up with amazing guitar playing skills and stage presence. You can really tell she loves what she does and that makes it the best type of performer.

This man is another face I recognized based off his performance at Boots and Hearts and the first American to hit the mainstage. Leaning towards the end of the night, Canaan was the last act before the two biggest of the night. He managed to amp up the crowd with a more rock-country vibe than any of the other performances for the day. The only song I managed to know was “Love You Like That”, but that didn’t stop me from enjoying everything else he gave. He had fund with the crowd and the stage and gave everything he had to make sure he had fun. I look forward to being able to recognize more songs of his on Canadian Country radio! 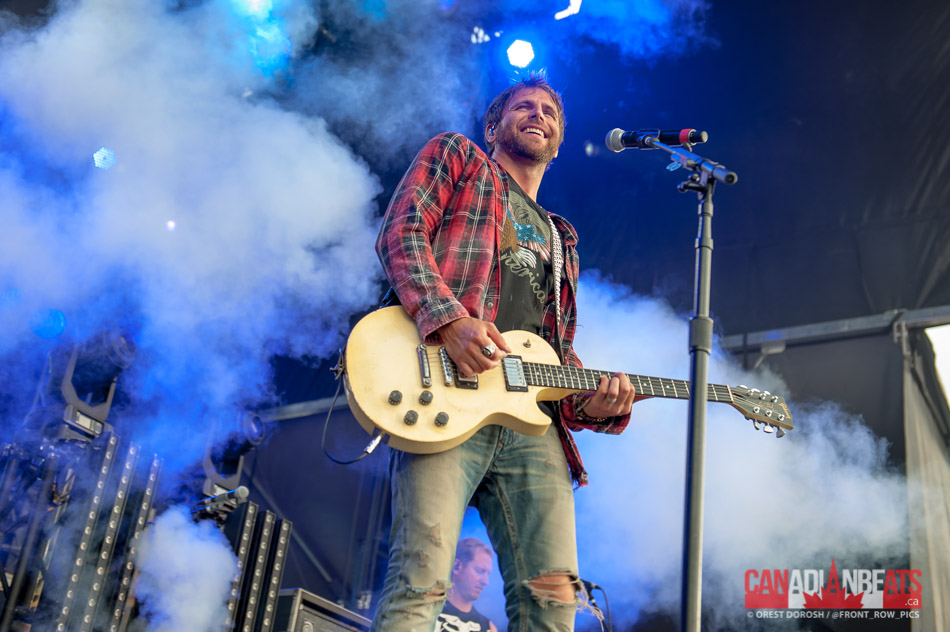 Dallas was probably the person I was most excited to see on day one. Every single show I’ve ever seen of him has always been a hit in my books. From the massive stage at Boots and Hearts opening for Eric Church, to breaking an all-time bandshell record at the CNE in Toronto the same year to the intimate CMT taping of songs from his new album. I cannot get enough of this man and his amazing talent. We could even take it as far as listening to his band Default when I was back in high school. He gives off such an amazing and heartfelt performance every single time. You can tell he enjoys his job and his music and loves to share it with everyone he can. Singing a mix of old and new tunes we got to experience songs like “Nothing but Summer”, “Jumped Right In”, “Autograph” and the always crowd favourite, “Cheap Seats” among many others. I don’t know when it will be, but I already can’t wait to see him perform once again. 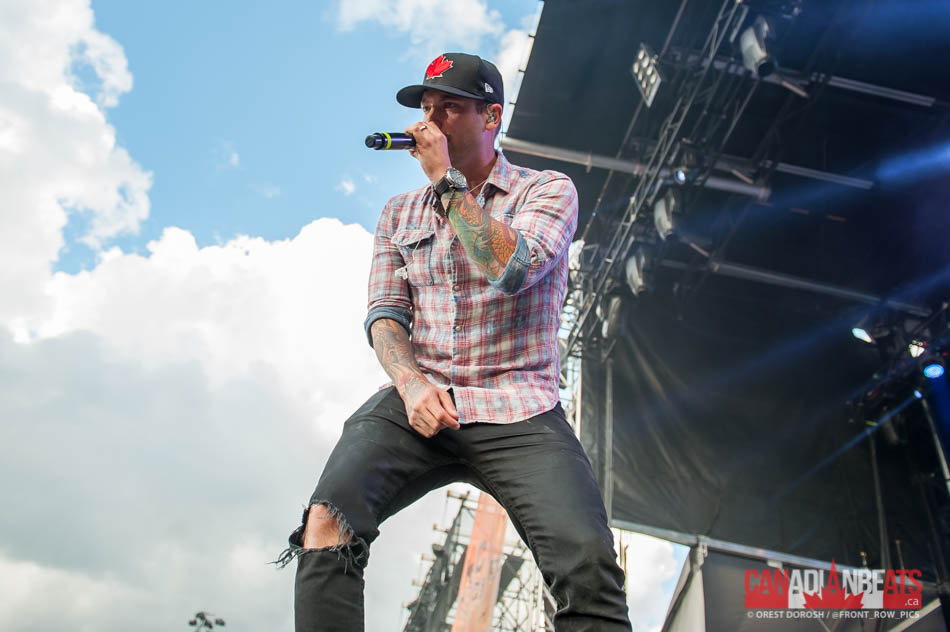 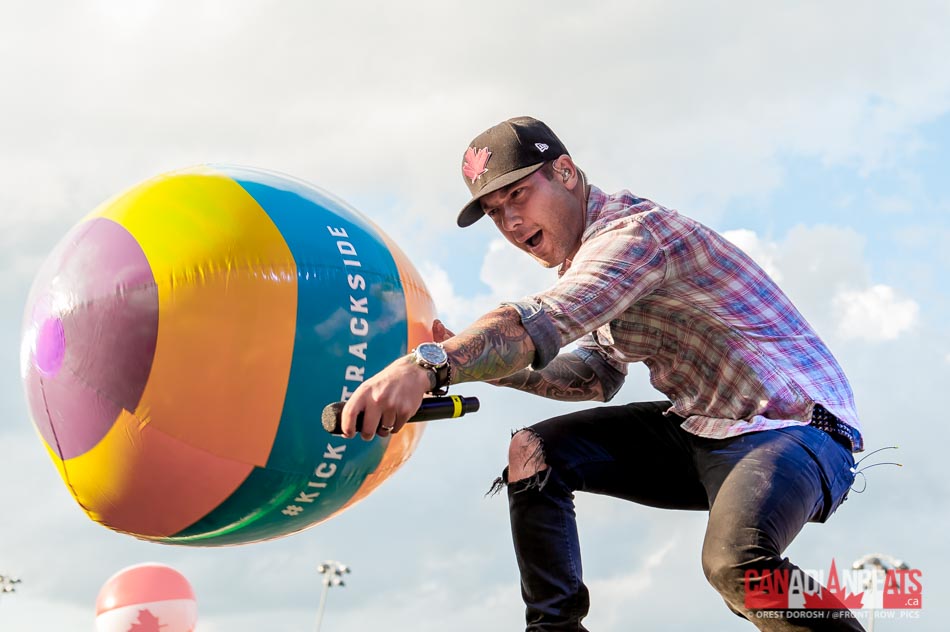 My only complaint about his performance is that he wasn’t Canadian. That being said, my complaint ends there. This guy is an absolute joy to watch on any stage he meets. It was nice to finally be able to see him as a headliner and not just an opening act. He’s worked so hard in the last year or two to become a well-known and reputable musician. In fact he just earned a country music award for Best Male Vocalist at this year’s American Country Music Awards. He is not only talented in the singing department, this man is also the writer behind some of today’s biggest country hits. He not only gave us a taste of the music he had written (songs for Florida Georgia Line, Michael Ray and Lee Brice), he sang all fan favourites all throughout the show. We got everything from “Shake Your Southside”, “Crash and Burn” and “It Goes Like This” to “T-Shirt”, “Die a Happy Man” and his most recent hit (which made number one in Canada this week) “Craving You”. His energy never faltered and his dance moves were adorable – I still think there’s room for improvement, but they’re definitely better than the last time. I’m thankful and happy he decided to spend his day helping us celebrate our nation’s birthday.

Even though the focus at any large festival is the mainstage, we can’t go on and forget the up-and-coming acts that deserve just as much notice. Keeping the crowds entertained between sets, a variety of new up-and-coming artists and bands hit the Side-Track Stage to perform their own songs as well as today’s hit songs. They all had their time to shine and our photographer Orest made sure he recorded their time on stage at Trackside. 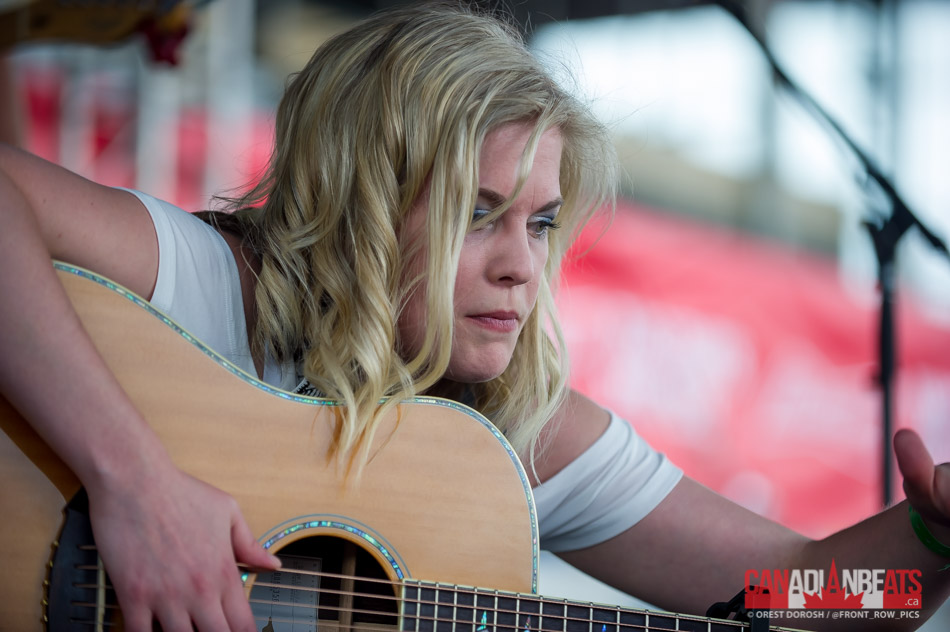 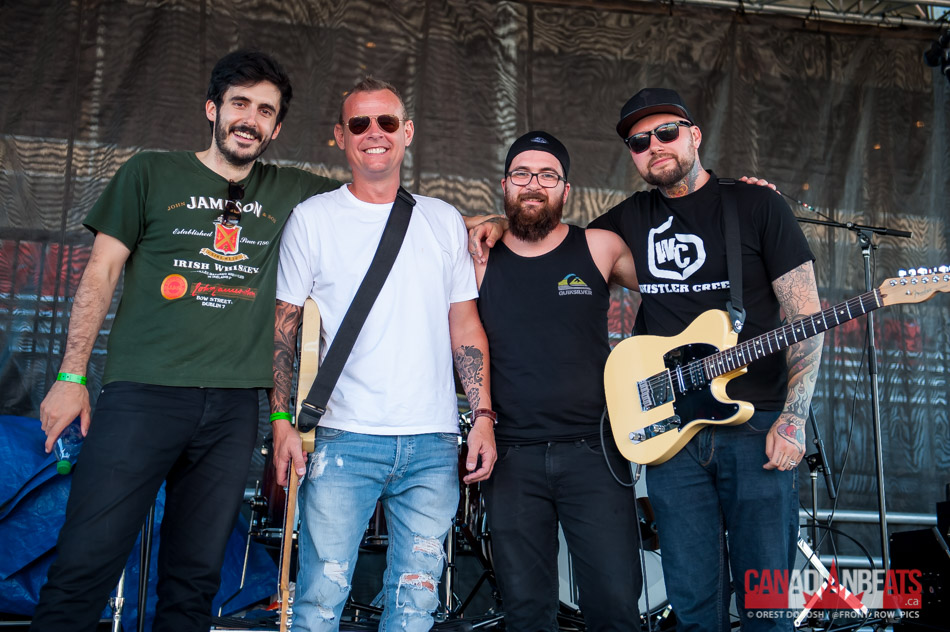 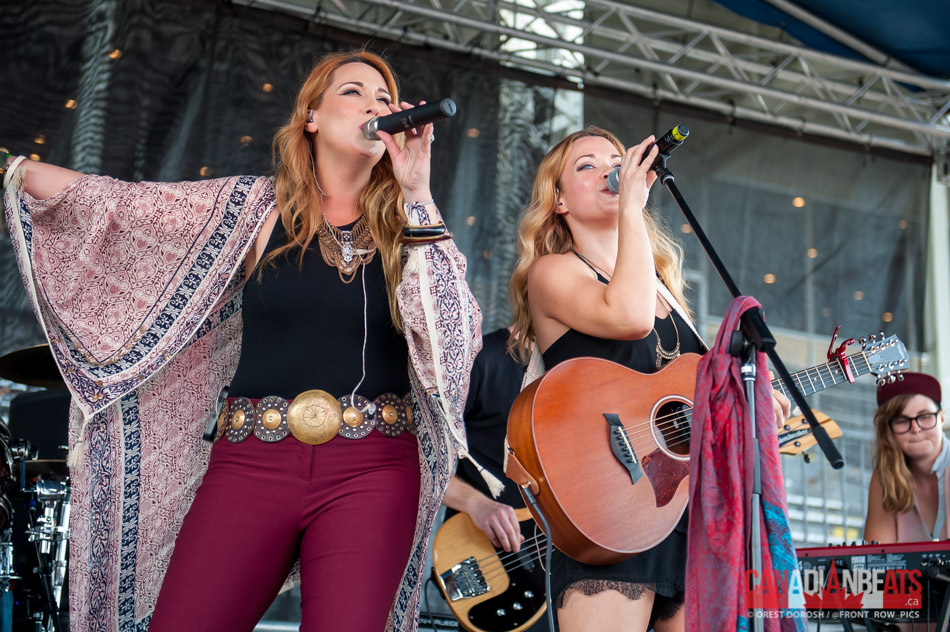 All in all, despite some setbacks with the rain, it was a great day. Music was good, people were (mostly) behaving and the weather turned in our favour. The best part was we all got to celebrate our great country with some fantastic music and fireworks with like-minded people from all over Ontario. I can’t wait to see what Day two brings…so be sure you stay tuned!

Want to see even more photos from Trackside Music Festival, head to our Facebook page!