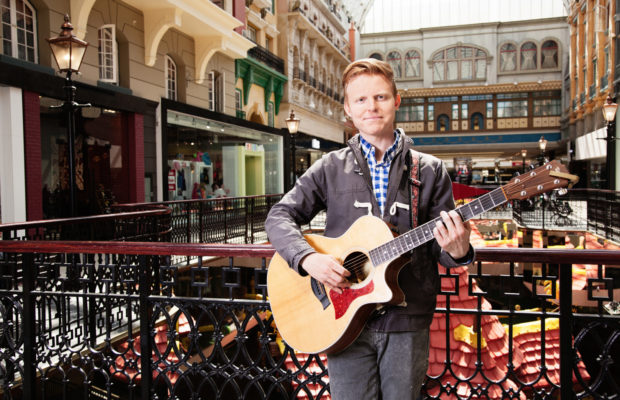 U.K-born and Canadian-raised, long-time Edmonton entertainer Martin Kerr is ramping up his musical artistry with his newest release, Better Than Brand-New. Emotionally charged, long-awaited, and musically fine-tuned, the 12-track release was a hot topic of discussion when we sat down with him.

First off, congratulations on the release of Better Than Brand-New. How do you feel now that it’s finally finished?

Exhausted! But really excited too. I can’t wait for the world to hear it. I’m really proud of the songwriting, the production, and cover photo. I’m hopeful that it will chart in the Canadian Billboard Top 100, which would be a big achievement for me, as it doesn’t happen to unsigned artists too often. More importantly, I hope the songs will reach new listeners and stay in their heads and hearts for a while.

How would you describe the recording process? How did it differ from your previous experiences, if it all?

My previous recordings have all been self-funded, either from my busking money or student loans, so I really felt the pressure of the clock in the studio. This time I was fortunate enough to be awarded a grant from the Alberta Foundation for the Arts, which covered most of the recording costs. That let me relax a bit and get more experimental in the studio, knowing that if something didn’t work out the first time, it wasn’t such a big deal. It was also more experimental in the sense that some of the album was written in the studio, after the recording process had begun. Collaborating with my producer (Juno nominee Stew Kirkwood) we wrote 3 new songs for the album in one day, including the title track, Better Than Brand-New.

Any funny moments from the studio that you can share with us?

No. I’m really serious in the studio! There were a few funny moments but I don’t think they can be printed in a respectable publication like yours…

This has been touted as a particularly emotional album—your website even reads: “Warning: do not listen without tissues.” Was this meant to be an album that packed a teary punch, or did life end up deciding that for you unexpectedly?

I’ve always loved songs that could make me cry. But there’s a good balance between the fun, humourous side of my songwriting, and the heartbreaking stuff, sometimes both in the same song. A really deep, personal song like ‘My Old Shoes’ even has a little joke right in the middle of it. With the track order I’m aiming to loosen people up with the fun songs before I hit them with the tear-jerkers.  Even the fun songs like ‘Not in Stores’ have something to say, it’s not just fluff. And I write from the heart about things that matter to me – things that affect me emotionally. Like the photo of Alan Kurdi, the refugee toddler who was washed up on a beach in 2015. That image inspired the song ‘Must Be a Million’. You’ll need to save your tissues for the second half of the album.

Which track changed the most from start to finish, would you say? And why?

Lovers in a Dangerous Time. Its an old Bruce Cockburn song, the only cover on the album.  I’d been playing it at my gigs in a quite similar way to the Barenaked Ladies version. When we got in the studio we decided we should take it in a new direction. The lyrics are so powerful, and we wanted to do them justice with a new arrangement. Out went the folky strumming and the brushes and the stand-up bass. We used an omnichord (an electric autoharp), some delicate fingerpicking, some epic drums, a wicked guitar solo and a big choir. It really grows from delicate at the start to thunderous at the end. To me it sounds like it could belong on SO by Peter Gabriel, which one of my all-time favourite albums.

Similarly, which track is the most personal to you?

Waiting Game is the most difficult one to share. I wrote it at a time when marriage seemed really hard. The Update is really personal too, written when I felt my dreams were slipping away amid the busyness and distractions of life. Both songs offer a chink of light towards the end. I’m an optimistic person and I always like to leave my listeners with some sense of hope.

And which are you most looking forward to play live?

I’ve played them all live already! I put on a pre-release show at the Winspear Centre in Edmonton, performing to a sold-out crowd of 1700 people, with a 9-piece band and a 100 voice pop-up choir. It was a real bucket list moment. We played everything from the album but the song Mr. Liao really seemed to affect people. It tells the story of a family of migrant farmers that I got to know when I lived in Beijing. It’s a really tragic true story. For the record we actually sent the song to Beijing to have someone play the solo on an Erhu (Chinese 2-string violin) and then send it over to us to mix. At the concert I played it with my cello player (Christine Hanson) and it was a really special moment.

Speaking of, you’re playing at the Edmonton Folk Festival this summer. What would you say to those thinking of going?

You should come! I love the Edmonton Folk Fest, and always make sure to go to at least part of it when I can. The line-up is always fantastic and really diverse. I know I’m going to discover something new and brilliant every time. .

And can you tell us about any other shows you have lined up for 2017?

Yes! This Saturday I’ll be opening for Sarah McLachlan at Rogers Place, (the new NHL arena in Edmonton), which will be the biggest show I’ve ever played. I delayed my CD release to line up with that one when I found out about it.  In August I get to play Canmore Folk Fest with Bruce Cockburn, Blackie and the Rodeo Kings and Whitehorse…3 of my favourite Canadian acts. Other than that I’ll be playing a few folk clubs and about 50 house concerts.

Finally, thanks so much for your time. Any parting words for your audience?

My pleasure. I just want to say to your readers, thanks for listening to independent music. Canada has such a vibrant music scene and that’s because people like you support their local musicians and dig a bit deeper than the mainstream. I hope you like my new album and share it with your friends. And feel free to invite me for a house concert at your place some time.