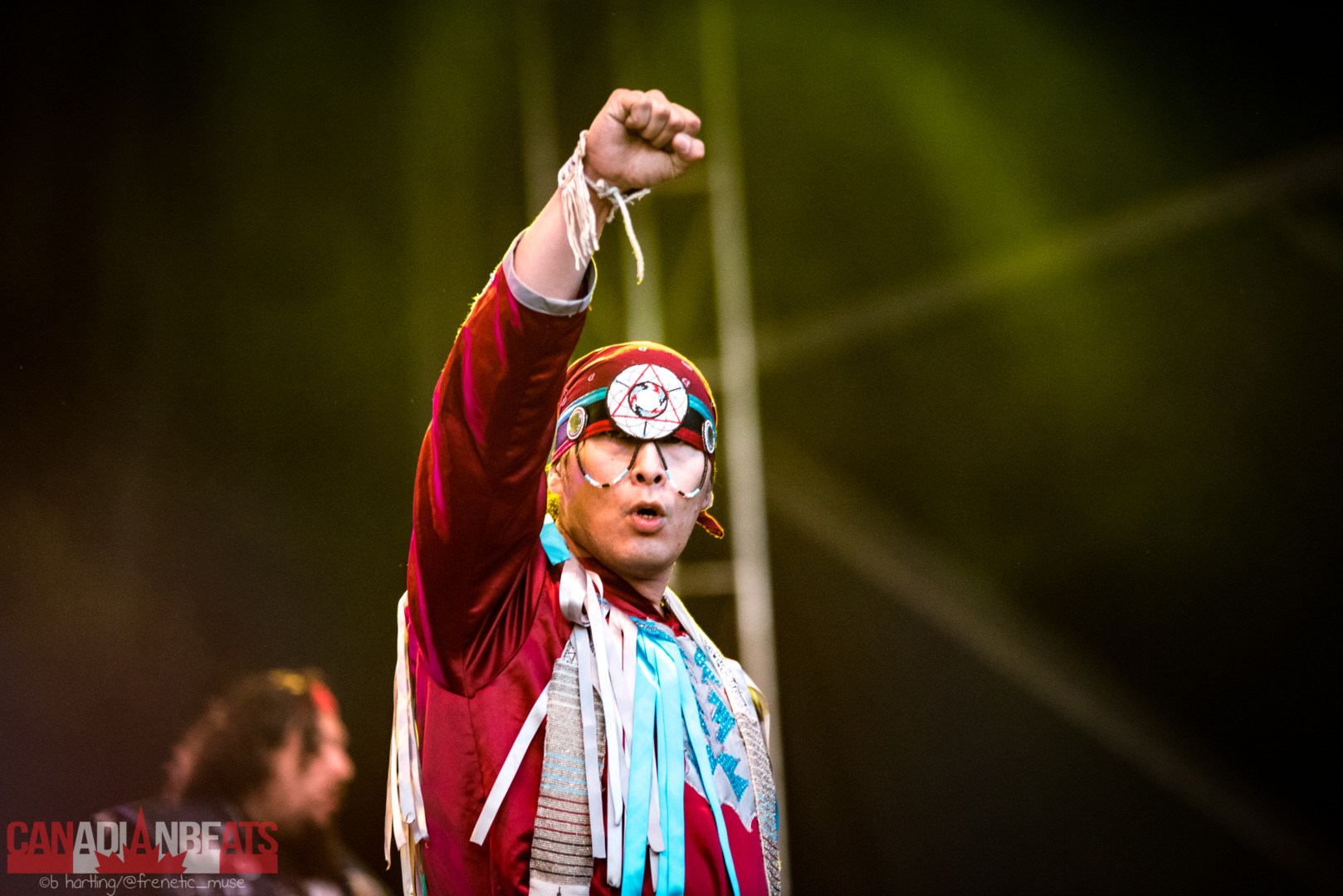 As proud as we may be to be Canadians, and as excited and patriotic as most of us are feeling to be celebrating the 150th year of our nationhood, we can neither deny nor run from the fact that our beloved country has a dark past. Built on stolen land, from coast to coast Indigenous tribes made their lives here for thousands of years before European faces ever appeared at her shores. Over the centuries our ancestors abused and oppressed those peoples, stealing first their land and then later, robbing them of their cultures.

Our Indigenous peoples are a strong breed however; and despite generations of oppression and neglect they have fought to have their voices heard. After years of being denied their culture they persevered and not only held tight to it but added it to the melting pot of diversity which has become our Canadian identity and more and more added that voice to our music scene. Though they face more of an uphill battle to add to that voice than most, including other ethnic minorities now calling this great nation home, they have had some incredible trailblazers helping to pave the way.  No Canada Day celebration by Canadian Beats could ever be complete without a look at a few of those remarkable artists.

Edward Gamblin was a member of the Cree people, born in Cross Lake, Manitoba in 1948 he survived Canada’s notorious residential school system and at the age of 18 started his first band Cree Nation. Gamblin is notable in that he was one of the original First Nations musicians to carve out a viable career built on an Indigenous audience rather than seeking crossover success in the mainstream country. Having obtained a degree in from the University of Manitoba he went on to become an addictions counsellor and band counsellor and used his music as a way to help heal his people. Gamblin later went on to become an outspoken activist for reconciliation and is remembered as one of the most influential artists in Indigenous music.

Perhaps best known as a founding member of the roots rock group The Band, Robbie Robertson wrote some of the most timeless hits in Canadian classic rock including “The Night They Drove Old Dixie Down” and “Up On Cripple Creek”, songs which Canadians of most generations have engrained on their psyche. Having been named one of Rolling Stone’s 100 greatest Guitar Players of All Time, Robertson is perhaps one of the most influential guitar players Canada. He has produced, and can be credited with helping Bob Dylan switch from acoustic to electric guitar (just one of the musical icons he has collaborated with). Having grown up in the Cabbagetown neighbourhood of Toronto he spent summers with his mother’s family on the Six Nations Reserve. It was here, after experiencing one of the Mohawk elders tell the story of Hiawatha and the Peacemaker that a 9-year old Robertson decided he wanted to be a storyteller and history set into motion.

Buffy Sainte-Marie came into her own during a time when music was politically charged and protest songs were effective weapons against oppressive government policies.  As such it was only natural that the Cree singer-songwriter would go on to spend her lifetime at the forefront of social activism. Throughout her career Sainte-Marie has been a vocal proponent of Indigenous issues with her activism leading to her blacklisting from American radio in the 1970s. Throughout her near 5-decade career Buffy released 17 albums and her songs have gone on to be covered by notable artists of every generation. More so than her music though, her greatest impact has perhaps been through her philanthropic endeavours, the Nihewan Foundation and Cradleboard Project both of which work to improve educational opportunities and participation for Indigenous youth.

Tanya Tagaq is testament that the horrors of residential schools are not shrouded in our deep past as we may try to fool ourselves into believing. Herself, only in her early 40s, being a survivor of the program. Despite this background Tagaq has gone on to become a force in the music industry and an outspoken warrior for Indigenous rights. Bringing her own brand of Inuk throat singing (typically performed by two women) fused with raw emotion and a visceral punk edge to the mainstream in a way that is fiercely proud and unapologetic of her culture and at the same time welcoming to the outsider wanting to learn about it. In doing so she has influenced a generation of First Nation, Metis and Inuit artists and instilled in them the knowledge that they do not have to give up or run from their culture to make it in the music industry.

There is no denying that, as anyone who has ever attended Tomorrowland will tell you, the world of electronic music is very, very white. A Tribe Called Red is not just testing that wall but tearing it down. This Ottawa based trio blend electronic music with traditional First Nations chanting and drumming elements and a politically charged visual display during their live shows. The threesome, consisting of Ian “DJ NDN” Campeau, Tim “2oolman” Hill and Ehren “Bear Witness” Thomas,  have built audiences throughout North America and into Europe and truly are paving the way for Indigenous DJs coming up in the electronic scene. The band are also vocal supporters of the Idle No More movement, a protest movement consisting of Indigenous activists as well as non-Indigenous allies fighting for Indigenous right and respect for treaties. As well the group has previously addressed their fans on the issue of cultural appropriation having issues statements to their non-aboriginal fans to avoid wearing headdresses and war paint at their shows.

Rex Smallboy found himself on the forefront of the Aboriginal hip hop scene in Canada when in 1995 he founded War Party during a time when rap was first making its way onto reservations.  The group went on to win Canadian Aboriginal Music Award for Best Album in 2001 and a further two nominations in 2002 and 2003. Notably War Party were the first First nations rap group to have a video aired on Much Music.  With 56% of Canada’s First Nations population being under the age of 24 it’s not surprising that hip hop has replaced both rock and traditional powwow music as the most popular genre on reserves across the country. With many of them growing up in poverty and isolation these youth can see themselves in the lyrics coming out of the rap scene in America’s ghettos. Artists like Smallboy have added an Indigenous voice to those beats and made them their own and opened up the genre to generation of youth.

The artists mentioned here are only a handful of the more prominent Indigenous artists our country has produced. Though we are as a society becoming more open and accepting of the various voices making up our population we still have a long way to go. Music truly is the universal language and we here at Canadian Beats encourage you to explore more of the incredible Indigenous artists that have contributed to our thriving scene as well as the music of other cultures throughout the world.