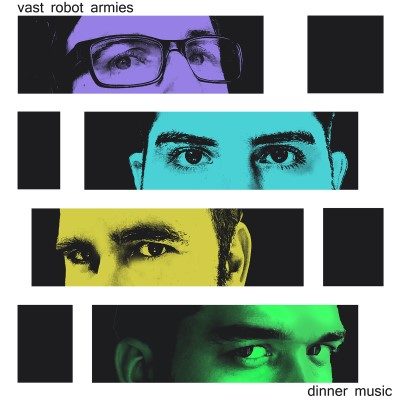 With the title emerging from a joke made at a house party, in which a friend of vocalist and guitarist Jason Thomas commented on how the music was not quite “dinner music per se”, Vast Robot Armies have released their latest full length record, Dinner Music.  Along with John Agee (vocals, bass, guitar, and piano), Joseph Wells (lead guitar, bass, and vibes) and Chris Metcalf, Vast Robot Armies turned an off the cuff comment into a song- that came together in fifteen minutes- which then lead into a full length record.

Knowing origins of “Dinner Music”, the song becomes the centre point of the album; after all, it is not often you hear of a song emerging from a joke and being written in the following fifteen minutes.  Over the course of its four minute length, the song takes the listener on a journey that is as reminiscent of 90’s alternative rock as it is of 60’s psychedelia.  The song also demonstrates the band’s unique ability to write interesting dual guitar lines that weave in and out from each other.  The title track, along with “Motor Home” and “Mahovolich” demonstrate Vast Robot Armies’ ability to blur the lines between the rhythm and lead lines to create multiple and very unique guitar parts.

It is this element which makes the simple nature and structure of Vast Robot Armies’ songs come to life in a manner that borders on experimental, while still remaining accessible to the everyday rock fan.  Songs like “Cruel Elephant” and “Weird Things” flourish because of the band’s use of different textures and effects, often creating a space age atmosphere, further adding to the experimental layer in which Dinner Music offers.  My favorite track off the album would definitely “Spider And The Fly” for it’s slinky and lose guitar riff and how it contrast with the marching pulse of the song.  This, along with the shifting feel in the chorus and intricate guitar work leave the song feeling very reminiscent of Queens Of the Stone Age.

All in all, Vast Robot Armies’ Dinner Music is a fun record which looks into different eras of alternative rock- whether it be the 90’s California scene, or the early days of 1970’s glam- while tapping into modern indie rock in a subtle fashion to create a record which many will love.  Vast Robot Armies’ ability to straddle different styles of rock further fuels- or perhaps is fueled by- their explorative and experimental approach to song writing, something which is often absent in today’s rock.  It is specifically this which makes Dinner Music standout among the countless releases from up and coming musicians and distinguishes Vast Robot Armies’ from their peers, making this record a must listen to.