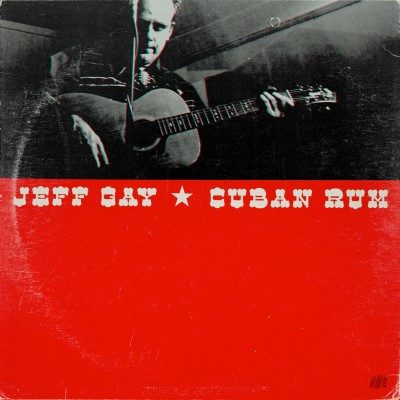 Veteran of the East Coast music scene, Jeff Gay releases his follow up to his 2010 solo release with new album CUBAN RUM, which he’ll be showcasing at the Timber Lounge, Halifax on June 30th. The 9 track release under the Hungry Records guise, marks a contrast to his earlier releases with a fuller southern drenched sound and production.

As a born and bred Haligonian (well Dartmouth, actually) Jeff is a familiar face on the Halifax music scene. In addition to playing with The Legendary Golden River Show Band, Jeff has played with the likes of Christina Martin, Laura Merrimen, Acres & Acres, Norma MacDonald, Craig Buckley and many others. Jeff’s musical career began with East Coast band, Bark fearturing Kris Moulton (drums), Dave Chipman (bass), and no less than Matt Mays back in 1994, before Curtis MacPhee took over from Mays on guitar and vocals.

Canadian Beats asked him how the album was conceived, “We practiced as a unit one time before each recording session and just blasted through the songs. One session I went dressed up as my Latin alter-ego Ron Cubano and made very little sense as I gave direction in pseudo-Spanish” recalls Jeff.

CUBAN RUM with its southern slide guitar laden sound, references everything from early Thin Lizzy, The Band, Neil Young through to Richard Ashcroft and the Beatles. Down to earth lyrics and straight up raucous overdubbed musicianship is a pure slice of Canadiana mixed with Tequila.

“I had 30 or so songs I had recorded by myself, that I called the Cotillion Demos and passed around to some select friends as 2CD collections. Eventually the Cuban Rum running order came to be based on friend’s suggestions and my own preferences” he continued.

“My inspiration was definitely Neil Young’s Harvest although I don’t necessarily think anything on CUBAN RUM sounds like Harvest in hindsight, but I would say that’s where the acoustic sound of the album came from”

Opening track “Bridges” replete with and heavy layered guitars will strike a chord with those familiar with the ‘Big Lift’ project and his clever use double meanings is a real highlight. The subtle use of violin and the keyboard melodies add a unique flavor to many of the tracks on the album. Following hot on the openers heels is a Dylan’esque “Mirror Diamond” and again with its East Coast violins proves a forceful track.

“Honeychuck” a seventies inspired honkytonk piano epic with catchy hook conjures up Saloons and a bar full of shots. “Hold on Love” slows the tempo right down with lyrics of love & loss and features a Sitar sounding riff straight out of the George Harrison soundbook.

‘Bel Ayre Ave’ is Canadian Beats favorite at the time of writing with its haunting meandering vibe, deep vocal tones and sumptuous string arrangement. I spoke to Jeff about the track.

“So glad you like Bel Ayr Ave! It is my favorite too! My friend, Andrew Waite, who also plays guitar on the album (including the electric on this track) thought the instrumental version on the demo CDs was notable, so this made me write some lyrics for it. It was originally suppose to be the last track on the album, but the album’s co-producer, Glen Leck, thought it would be better featured smack dab in the middle, and that the title track was a more appropriate closer”.

The album showcases the piano work of Jeff Gay. It also features the backing vocals of Norma MacDonald, Julia Weir, Curtis MacPhee, and Christian Masotti; and like Jeff’s previous releases, Kindly Request (2008) and Rickety Row (Woods Bros. Band, 2012), sweet guitar riffs interchange throughout. One of the signature textures of the album is no doubt the violin work by Rebecca Zolkower and Shannon Quinn. Strings were arranged and composed by Jeff but brought to life by the excellent interpretive work of the players, and they really add that little extra element.

Tracks 6 through 8 lead you straight down the country path. ‘Too Cute To Boot’ is a pure slice of country, while the slower hypnotic string intro of ‘Reckless’ leads into darker territory. ‘In The Country’ with its waltzy tempo and organ backdrop completes the trilogy.

‘Cuban Rum’, the albums title track closes the album and is a full-on crescendo building humdinger that will stay in your psyche long after the needle returns to its holder. Layers of keyboards mixed with Havana inspired lyrics are all sung Dylan-style as the tempo sways in and out of Beatles, Lady Madonna territory. A really great track, and well worthy of its status as the albums moniker.