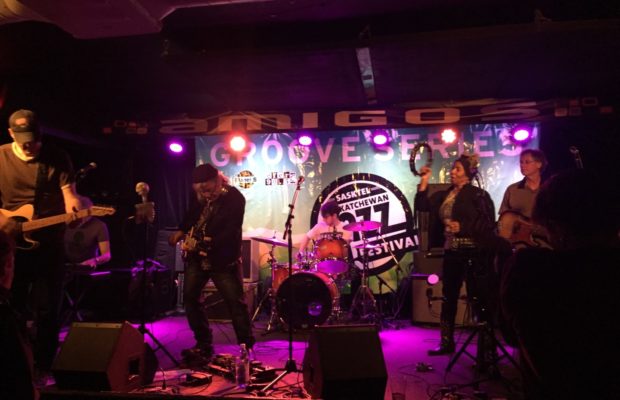 Admit it, that’s clever word play in the title.  I know, because I wrote it.  I also know that after the Sasktel Jazz Fest Goes Country on Sunday night, I witnessed one of the greatest prog-punk rock shows I have ever seen.  This was without warning, hype, or any advanced research as, if you have read any of my other reviews, I never research until after I listen.

The write up on the Jazz Fest website reads, “If you’re a serious afficionado of underground rock music history, hearing Simply Saucer for the first time borders on the miraculous, perhaps just a notch down from Jesus raising Lazarus from the dead.”

Hearing and seeing Simply Saucer for the first time, as this reviewer did, is not only better than Jesus raising Lazarus from the dead, but it comes with a way cooler soundtrack and way cooler crowd.

Straight ahead and unpretentious, or completely aware of their pretention and reveling in it, Simply Saucer, a nod to the Pink Floyd album Saucerful of Secrets, rocked Amigos fanatically being a perfect fitting piece in the Sasktel Jazz Fest Mosaic.

In my notes I wrote, “How can a band who looks like my dad on a golf course rock harder than anyone ever?”  It is a question I am still dealing with deciding, that question in itself, is the true punk manifesto, the true spirit of a music created in popular defiance for individual expression.

The face of punk became synonymous with the dress of popular 1970s punk band, debatably commercial and obviously fabricated, Sex Pistols, as a music enjoyed by freaks who uniformly dressed in sharp objects and had liberty spikes.  Now, in fairness, many punks enjoy wearing sharp objects and having liberty spikes, but that wasn’t the intent, it wasn’t to be outrageously uniform it was to be individual, come as you are as a later genre-breaking anthem would evoke.

Seeing Simply Saucer was simply that, a band playing their music for their people, whoever they may be, under a stage backdrop labelled “Groove Fest,” aging punks who never received the Frank Black credit or even released material (luckily being rectified with reissues and releases this year).

And that is why small crowd was on their feet, taking in every splendid moment.

I heard word of mouth from DJ Charly Hustle the day before at the Potashcorp Club Free Stage, who “was packing up right after my performance that night and going straight there.”  DJ Charly Hustle didn’t even explain who they were or what they were like, but I could tell from his excitement it would be worth seeing.   Street level publicity is consistently reliable.

Simply Saucer rocks to levels of simultaneous nose, ear and eye bleeding, A Clockwork Orange at high altitudes in the Arctic, or on a dwarf planet’s barren terrain.  Remarkably, somehow, a song called “Nazi Apocalypse” is one of the catchiest art/ dance songs I have ever heard.  How is this possible?

For a band started in 1974 and ended in 1978, Simply Saucer’s sound is fresh, unique, bold, daring and accessible, prog-proto-punk-pop-dance-everything-to-everyone music tougher than a Detroit knife fight or Hamilton steel mill.

I once wrote in a review for Ninjaspy stating they were the band to prove “the band one currently plays in, is as well as most of the bands that one likes, are lame.”   Simply Saucer may be the band to take that title.  Ninjaspy and Simply Saucer need to do a Crossroads band playoff battle with Steve Vai as the demonic judge.

Or, better yet, Ninjaspy and Simply Saucer should team up, tour together, and change the world.  Maybe the unsuspecting masses are not ready for that yet, which is why it needs to happen…

Simply Saucer is alt. prog-punk at its fantastical finest, artsy-aggressive music to make you move and smile.

Wonderful music lives for a reason.  Accept it. Embrace it.

At the Sasktel Jazz Fest there is truly room for everyone, so go listen!