Home / Albums / Review – The Raven And The Fox

Review – The Raven And The Fox 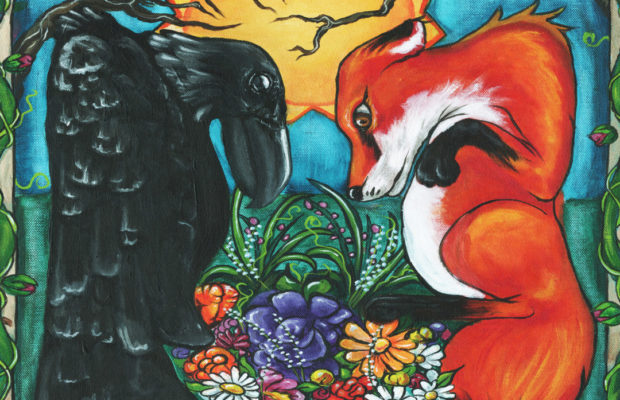 Hailing from Canmore, Alberta, The Raven And The Fox have released their debut, self-titled, full length album.  The folk rock duo is led by Julie Chang and Sean Isaac and is backed by bassist bassist Kyle Pullan, cellist Kitty Thompson, and drummer Matt Mueller.  The Raven And The Fox is the group’s follow up to their 2015 debut EP.

The ten track album starts with “Fly Away”, a song which builds from what could almost be a gentle lullaby in to a stirring folk ballad that is filled with a sense of power and purpose, without losing its gentle nature.  It is the duo’s choice to actively involve pianos, organs, electric and acoustic guitars, cellos, and drums in their songs which allows for such growth, aiding the wonderful melodies and harmonies of Chang’s voice.  Through the additional use of instrumentation, The Raven And The Fox are able to separate themselves from the overabundance of acoustic singer and songwriters and give their music a nice sense of colour.  Whether it be the ragtime inspired piano solo on “Mountain Moments” or the melancholic cello of “Sweet Dreams”, these already very well written songs only benefit from such additions.

The Raven And The Fox proves that they are able to capture a number of moods across their release.  While many modern folk groups often fail to exceed past the boarders of their style, The Raven And The Fox are able to provide acoustically driven ballads such as “Where Mountains Meet The Sea” and “Everything” along with bouncy country influenced prairie rock, as best heard on “Follow Me” and “Desert Alchemy”.  Among these is “Wash Over Me”, a song which seamlessly straddles both of these categories as it starts in a manner similar to a ballad, and grows into a grooving folk rock conclusion.

The Raven And The Fox is a very strong debut full length album which perfectly encapsulates Canadian folk rock with a string of heartfelt ballads and soft rockers influenced from modern country and Canadian icons of the likes of Neil Young and The Band.  This is most certainly an album which shows a lot of potential for The Raven And The Fox to become one of Canada’s next big folk rock outfits!