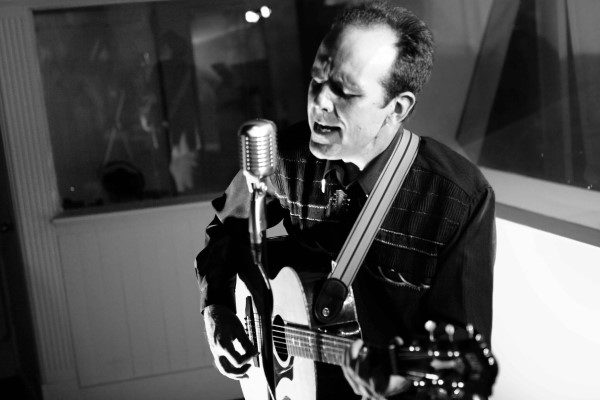 Your new album CUBAN RUM is available now. What were the most memorable aspects of writing and recording the album?

I remember that when I finally had a good idea of what songs I wanted to do for CUBAN RUM, the band came together so quickly. Hats off to drummer Benn Ross for his brushwork on every song. Everything sounded pretty solid right off the bat. I’m pretty sure that hanging with Charles Austin at the Echo is the most fun you can have in Halifax. We practiced as a unit one time before each recording session and just blasted through the songs. One session I went dressed up as my Latin alter-ego Ron Cubano and made very little sense as I gave direction in pseudo-Spanish. Then there are many fond memories as me and Glen worked through the overdubs on the album. Christian kept on putting a “T” at the end of the “oohs” on Too Cute to Boot: ooht, was the hilarious result. Also memorable sessions recording violins with Rebecca Zolkower and Shannon Quinn as we scrambled to make sense of the parts I had envision for the LP.

Do you have a favourite track from the album? If so why?

My Dad was asked what his favourite track on the album was: and he said all of them! That was literally one of the best moments of my life, hearing him say that. I was hoping to write just enough good songs to make a full length – as James Brown would say: hit it and quit! My future album’s template will be eight to ten songs, and about 45 minutes long. I appreciate how famous filmmakers have a comfortable length for their films, like how Scorsese movies are usually a couple of hours long while Kubrick ones will go a little longer. I think I finally found out how long my films should be!!

I am currently listening to a lot of Todd Rundgren. I love his trilogy of early 70s albums (ie. Runt: The Ballad of Todd Rundgren, Something/Anything, A Wizard/A True Star). Those albums really inspire me to greater production goals! One of Todd’s biggest influences, Laura Nyro, is also one of my favourites. I would say that she is my songwriting hero ‘cuz she talking about social and spiritual issues way back in ’66. I think that her masterpiece, Eli, is especially impressive in its subject matter: love, poverty, drugs, homosexuality, abuse, loneliness. I appreciate that she could write about everything and matched it perfectly to her signature sound – Stone Soul Picnic is my jam! Then I would say perennial favourites for me are The Kinks, John Prine, Gene Clark, Sly Stone, Van Morrison, The Band, etc.

What is your view of the East Coast music scene at the moment?

Always lots of interesting stuff happening here in Halifax & Dartmouth! My favorite thing by far was The Everywheres, Dignity Fever LP. My co-worker Danny constantly says “you are killing this album,” and I know it. I saw them open for Wintersleep in January at the Marquee in Halifax and really felt inspired to write after that. I guess I always check out the major releases by local artists, but whatever Matt Mays is doing is always most interesting to me. I’m also the type of guy who gets excited to see the Zombies perform ‘Odessey and Oracle’ at the Casino, so I’m sort of an old foggy now!

I always thought it was really neat that some of the all-time greats were Canadian: Joni, Neil, Lightfoot, Cohen, Robbie Jaime Robertson and the members of The Band. I absolutely adore Kate & Anna McGarrigle’s debut album. I believe that Stan Rogers is severely under-rated. Nothing better than Pagliaro’s singles Some Sing, Some Dance and Lovin’ You Ain’t Easy, and Runnin’ Up To Saskatoon by Guess Who. Also recently got into Mary Margaret O’Hara’s Miss America. And I must always acknowledge two excellent American writers as honorary Canadians: Jesse Winchester, who was exiled and recorded some of his best work in Canada; and Jonathan Edwards, who moved here after several classic LPs.