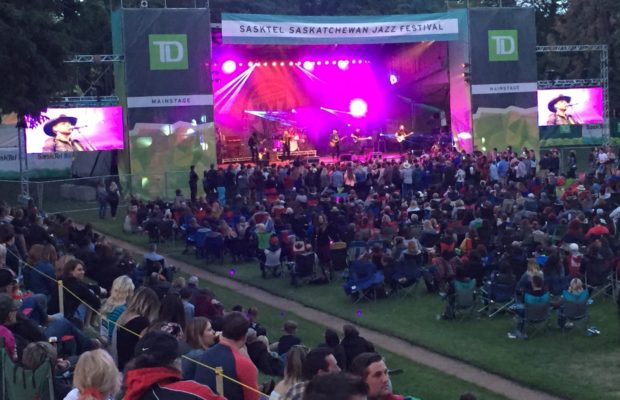 As a perfect counterpoint to Saturday’s rainy afternoon, the Sasktel Jazz Fest Goes Country at the TD Mainstage, Bessbourough Gardens could not have been planned on a more beautiful Saskatoon night.  It was the perfect weather for an outside evening show.

Elly Thorn kicked off Sunday’s Sasktel Jazz Fest Goes Country with a mixed set of originals and covers.   Strong lead vocals, with an impressive band, set the tone for the remainder of the night.

Multi-instrumentalist Kristan Couture creates a unique sonic palate for Elly Thorn’s songs using violin, banjo, mandolin and vocals.  Commenting on the Sasktel Jazz Fest, Couture said, “Performing at Jazzfest has been a wonderful way to experience the extraordinary music community in Saskatchewan,” a sentiment that can be shared by musician, and music goer, alike.

A cello bass player is an amazing musical choice and sonically splendid.  As a bass instrument, it does a fantastic job keeping the harmonic centre, with enough rich depth to its tone to support the higher stringed instruments, but when played arco becomes a moving melodic counterpoint.

Dressed like they are going to a funeral in Deadwood, South Dakota, in 1887, The Dead South play with an acoustic fevered ferocity and eager angst of a talented punk band with controlled sincerity and amazing technicality.  Combining original songs with an old school country style, foot stomping grace and instrument choreography, The Dead South should not be missed.

As the resident banjo player for The Dead South, Eliza Doyle said of her SaskJazz Fest experience, “An authentic collection of the salt of the earth folks that built and made Saskatchewan what it is, and what it will be for the future. It’s the audience that makes the performance, and you made our night!! SASKATOON JAZZ FEST!!”  (Uppercase characters kept for effect.)

Following The Dead South was Vancouver-based Chris Buck band a bratty, but not brash, country rock performance by a group of genuine nice guys.  Chris Buck’s deep, country voice leads a series of tunes about all the good times country music can bring.

Playing 150 shows this year across Canada, the Chris Buck band is poised to impact the Canadian music scene with a track currently charting at number 28 on country charts.  Being joined onstage by the Canadian Country Music Association’s 2016 Spotlight Performance Contest winner Amy Nelson, and closing the set with “Giddy Up,” the 2017 Calgary Stampede song, the 2015 British Columbia Country Music Award’s Group of the Year, and Country Club Act of the Year, the Chris Buck band proves they truly are the self-proclaimed “Hardest Working Band in Western Canada.”

Headlining the night was “the pride of Flat Lake, Alberta” Brett Kissel, a charismatic, professional entertainer with immense stage presence and polished performance.

Kissel’s country career accolades speak for themselves, if inanimate objects, and abstract ideas, could talk, awarding Kissel the 2017 International Artist of the Year at the Worldwide Radio Summit in Hollywood, California, the 2016 Association of Country Music in Alberta Award for “Album of the Year,” and “Single of the Year” (Airwaves),  and the 2014 JUNO Award for Breakthrough Artist, the first time in 17 years a country act received that honour, among many other accolades.

Brett pulls out a Western swing tune in recognition of the SaskTel Jazz fest and the melding of different musical styles.   A great mix of new country rock with old school country sensibilities played by an all-star band of country music award winners and the finest country players from across Canada.

Among the musical surprises, such as an original Western swing tune, Kissel gave away a signed acoustic guitar to a lucky audience member.  The guitar had its back covered with looked like a t-shirt, reminiscent of an old Labatt’s Blue logo which read “Brett Kissel – Beer and Canadian Girls.”

An endearing rendition of “Oh Canada” was a harmonious moment with the crowd standing, singing, showing pride for their country and respect for the performer. Other highlights included a touching song for cancer survivors.  Audience members were asked to shine their phone lights in support of those going through treatment and those whose lives have been affected by cancer.  It is a bitter sweet moment with people acknowledging their experiences and connecting in their memories.

A cover of “Thank God I’m a Country Boy” kept the crowds dancing, clapping, and stomping.  In recognition of Canada 150, Kissel has been adding Canadian cover tunes to this year’s sets.  This night he brings out Great Big Sea’s “Ordinary Day,” his band pulling it off flawlessly with as much energy and musicianship as the original.

A fantastic way to end off the Sunday night at the Sasktel Jazz fest!