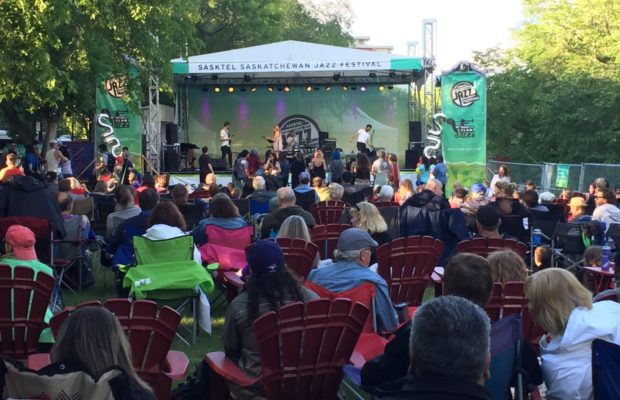 The Sasktel Jazz Fest is an annual Saskatoon summer highlight, finding fans from all over coming to downtown Saskatoon, the Broadway District, and select venues, to appreciate diverse, eclectic musicianship.

The 2017 Pride Parade was Saskatoon’s biggest yet with over 5,000 people participating and over 150 floats as part of the celebration.  The city of Saskatoon showed its pride by rainbow painting downtown crosswalks.

Saskatoon male burlesque icon Peter Mitchell Morningwood, founder of the Menagerie Burlesque Company, was complimented by a United Way volunteer with an enthusiastic “Thanks for keeping Pride weird!” with his gold glitter beard a harmonious match to his signature red sequin jacket.

A truism for the Sasktel Jazz Fest is the intermittent weather, and the first full day at the Free Stage was no exception.

Between the end of the Pride Parade, and during Anna Haverstock’s wonderfully performed set of catchy, alt. rock pop tunes, the rain clouds opened delivering a downpour, sending the unprepared of us, myself included, under trees or huddling around the tented sound booth, while the prepared festival goers danced in the puddled grass with various coloured umbrellas, official Sasktel rain jackets, or homemade garbage bag rain ponchos.

The audience was undeterred and stayed for the duration of the rain which, after the worst part was over during Haverstock’s set, the skies began to steadily clear.

Commenting on the “unfortunate weather the Jazz Fest seems to attract,” Barret Ross, Free Stage sound technician for PR Productions reminded me “It is a twelve day festival in Saskatchewan.  There’s bound to be rainy weather.  People just seem to remember the cloudy days and not the clear ones.”  The crowd today, though, chose to not only accept the cloudy day but live within it, keeping enthusiastic voices and loud cheers alive for each performer as the park began to dry.

Throughout the day, the Potashcorp Club Free Stage had continual entertainment, offering an array of acts between bands and quick stage line checks.  Such acts included Alma Flamenica, a series of dance performances melding various elements of contemporary and traditional dance styles; Acro Yoga offering a stylized yoga / acrobatic routine / contortionist routine incorporating Pride themes; and various drag superstars including a Liza Minnelli homage,  “Don’t Rain on my Parade” performed in a fiery sparkled gown with an adoring toddler fan led to the front for a quick high five mid-performance,  Donna Matrix, complete with back up dancers and group choreography, to “Don’t Cha” by the Pussycat Dolls, and the high impact dance ladled routine by Amy grant, not be confused with the Christian rock turned pop singer, however that would be an amazing drag star routine.

Saskatoon’s Soft Cotton, driving rock with Melissa Etheridge style vocals, kicked off their set with a big, solid rock tune, going into a song with a Weakerthans intro, transitioning from a mid-80s alternative Cure tune with tastefully placed half time and double time sections. Addition of a single alto saxophone, who doubles on keys, was a nice sonic touch.  Soft Cotton should try arranging in different keys, perhaps raising a few tunes to let the lead vocalist experiment with her vocal range.  Over-all a strong set of well-played driving rock songs.

DJ R2 warmed up the stage for Catey Shaw, getting the fearless dancers in the crowd to help dry the still wet grass.

New York based performer Catey Shaw performed for Pride two years ago and made a true return performance.  With her band in matching white t’s to accompany her white denim jacket, Catey Shaw performed a set of melodic, catchy pop tunes with a well-arranged edge.  These tunes aren’t standard linear start and stop dance tunes, there are “feel” changes, sweeping riffs, and reoccurring technical hooks.

For her song “Ransom,” Shaw tells the audience, “I think every artist should have a song where they spell something.”  Good to know if you are having difficulty creating a ransom note.  Of course, if you have to label your ransom (almost spelled it “ransome” to be clever) note as a ransom note, then there are bigger issues at hand.

Attesting to her modesty, Shaw admits this is the longest set she had ever played as she “didn’t realize people would want to hear her sing for longer than 45 minutes.”  Shaw’s Saskatoon following is strong based on the amount of dancers and lip synch vocalists.

As the afternoon continues the park slowly fills and, by the time Hawksley Workman takes the stage, the park and sidewalk and adjacent seating area are packed full of eager music fans.

Earlier in the afternoon, after the rain and before the sun, there was a striking grey haired woman dancing barefoot at the front of the stage the only standing dancing music fan, as some bobbed from their lawn chairs, her long beads and patterned shawl swaying in time to her rhythmic movement.  There, in that moment, was a microcosm of the day, a melding of music and social movement, creating a place where everything fits and has a place.  To connect.

As Danny Papadatos, Saskatoon Pride co-chair and stage manager for the day, commented regarding the festivities, “Love always wins.”

And then on cue, the sun comes out, and the impromptu grass dance floor is filled with new comers to join in on the solitary celebration, going from solo appreciation to dance party.  Welcome to SaskJazz Fest 2017!